For the place in County Offaly, see Banagher. 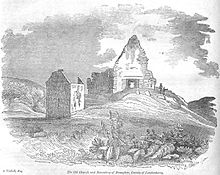 Ruins of the Old Church of Banagher, County Londonderry, in 1833

Banagher (pronounced ban-a-hər,  from Irish: Beannchar) is a parish in County Londonderry, Northern Ireland, and a ward of Derry City Council. The parish is made up of the medieval parish of Banagher and parts of the ancient parish of Boveva and the townland of Tireighter and Park, once in the parish of Cumber.[1] Banagher has many ancient monuments, including churches, holy wells, standing stones and chambered graves.[1]

Banagher lies in the western foothills of the Sperrin Mountains, between the rivers Roe and Faughan. The landscape is mostly rugged, with glens and narrow valleys rising into the highlands. Banagher Glen is a good example of the area's terrain and forms an important conservation area, preserving one of the few surviving examples of old-growth deciduous woodland in Ireland. The Glen has a trail which climbs through the woods to Altnaheglish Dam and Reservoir, which supplies water to Derry. The path up to the dam from the valley floor climbs through deciduous woodland and higher coniferous woodland to moor and heathland.

It is clear from the Annals of Ulster that there was a church at Banagher in 1121. In that year it is recorded that Giolla Easpaig Eoghain O hAindiaraidh (English: Gillespie Owen O'Henry), king of Keenaght, was killed by kinsmen in the Banagher cemetery. His name means 'servant of Bishop Eoghan', apparently a reference to St Eugene, Bishop of Ardstraw.[2]

On a sandy ridge by the River Owenreagh are the ruins of the old church and of a small square building sometimes called 'the abbey', with sharply pointed gables which once supported a stone roof. The church had a nave and chancel, but little remains of it. In the nearby cemetery is an ancient cross and a monument to St Muriedhach O'Heney, who is said to have founded the church and to have been abbot of the building next to it, and on one side of this is an effigy of him.[3] However, St Muriedhach O'Heney appears in no calendar of saints. According to local legend, St Muriedhach was led to the site of his church by a stag which carried his book on its antlers, acting as a movable lectern.[4] 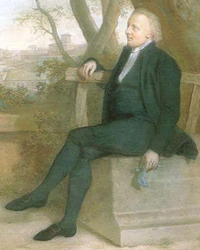 The Earl-Bishop, who paid for a Banagher church spire

Beside the remains of the ancient church is the hole from which sand called 'Banagher sand' is drawn, long believed to give good luck to race horses when thrown over them.[4][5]

There were also ruins of ancient churches at Straid and Templemoile, and the parish had a vitrified fort, on which by tradition fires were lit at Midsummer. Near the parish church is a large man-made cave.[3]

At the time of the Plantation of Ulster in the seventeenth century, some townships of Banagher, including Ballyhanedin, were granted by the Crown to the Worshipful Company of Fishmongers of the City of London, and others to the Worshipful Company of Skinners. Banagher became a distinct Presbyterian congregation about 1753, and its first minister was John Law who was ordained in 1756.[6]

The 18th century Church of Ireland church at Banagher, with a tower and octagonal spire, is on a rise in the ground and was built in 1782. The spire was paid for by Frederick Hervey, 4th Earl of Bristol, then Bishop of Derry, who was responsible for the construction of the famous Mussenden Temple. A Presbyterian meeting house at Ballyhanedin, in the Classical Greek style, was built by the Fishmongers' Company.[3]

As early as 1837 there were parish schools for boys and girls at Ballagh, at Tyrglassen (supported by the Fishmongers Company) and at Fincarn.[3]

Church of Ireland records exist for the parish of Banagher from 1821 for baptisms, 1827 for marriages, and 1837 for burials.[7]

The main industries are drylining, agriculture and sand quarrying, and local pastimes include fishing and hill walking.[1]

In the 19th century, there was a large bleach-green at Knockan, where eight thousand pieces of linen were bleached and finished every year for the English markets. Some linen cloth was also woven by local farmers in their own houses.[3]

There are Roman Catholic, Church of Ireland and Presbyterian churches in the parish. The Presbyterian Church at Banagher supports the work of the Church at home and overseas and also has a Boys' Brigade.[10] There are Catholic churches at Fincairn, Altinure, and Ballymonie, where Mass is celebrated every morning on week days and in the evenings on Sundays.[11]

Banagher is classified by the NI Statistics and Research Agency (NISRA) as being within Derry Urban Area (DUA). On Census day (29 April 2001) there were 2932 people living in Banagher. Of these:

Of 582 wards in Northern Ireland, Banagher was ranked as the 205th most deprived.