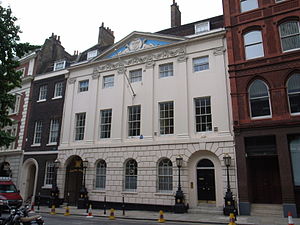 The Worshipful Company of Skinners (known as The Skinners' Company) is one of the Livery Companies of the City of London. It was originally an association of those engaged in the trade of skins and furs. It has evolved into an educational and charitable institution, supporting schools such as Tonbridge School in Tonbridge, Kent; The Skinners School in Tunbridge Wells Kent; The Judd School (also in Tonbridge) and The Skinners' Company's School for Girls in Hackney, London. 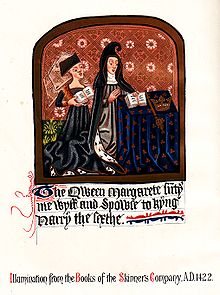 Queen Margarete of Anjou, wife of King Henry VI, here reproduced, is entered in the roll of the fraternity of Our Lady under date XV year of King Edward IV (A.D. 1475)

Under an order issued by the Lord Mayor of the City of London in the 15th century, the Company ranks in sixth or seventh place (making it one of the "Great Twelve City Livery Companies") in the order of precedence of the Livery Companies, alternating annually with the Merchant Taylors' Company. Although this cannot have been the origin of the phrase "At sixes and sevens", as the phrase appears in the works of Geoffrey Chaucer over one hundred years earlier, a connection between the event and the phrase is presumed[by whom?] to exist in some manner.[citation needed]

The Company's motto is To God Only Be All Glory.