The Derry team ahead of the 2009 National League final

The Derry County Board of the Gaelic Athletic Association (GAA) (Irish: Cummann Lúthchleas Gael Coiste Contae Dhoire) or Derry GAA is one of the 32 county boards of the GAA in Ireland. It is responsible for Gaelic games in the GAA county of Derry, which covers virtually the same territory as the former administrative county of Londonderry. The county board is also responsible for the Derry inter-county teams.

Although there were GAA clubs in Derry, Desertmartin and Magherafelt within a year of the GAA's foundation in 1884, and clubs in Ballinascreen and Dunamore (just over the Tyrone border) also date back to about that period,[1] the administration of Gaelic sports in the county took some time to get properly organised. A Derry county board was established in 1888 and paid affiliation fees to the GAA Central Council, but by the following year, although there were some 14 clubs active, the then GAA President Maurice Davin told the national Congress that the county lacked enough clubs to have its own board. South Derry and North Derry regional boards were established in the 1890s. In the early decades (up to the 1930s), the Derry GAA competitions took in a number of clubs from Donegal and Tyrone, while at various times clubs in South Derry played in the Antrim or Tyrone leagues. The local Catholic Church's opposition to playing games on Sundays hampered growth in the 1890s, but there was something of a revival in the 1900s, especially in hurling. The county also competed sporadically in the Ulster Football Championship from 1904. After the disruption caused by political conflict in the 1910s and early '20s, the county board was re-established briefly in 1926, and definitively in 1929, since when it has remained in existence.[1]

Derry play their home games at Celtic Park in Derry City, which is the county ground.[2] Home football games are also sometimes held in Watty Graham Park, Glen and Dean McGlinchey Park, Ballinascreen, which are regarded as secondary stadia.[2] Hurling games are also held at Lavey or Fr McNally Park, Banagher. The current senior football manager is John Brennan of Lavey, while Ger Rogan has been appointed Derry senior hurling manager for the incoming season. Both managers also take charge of their respective Under 21 County teams. The Minor football manager is Barry Dillon, while Dee Doherty is in charge of the Minor hurlers.

The County is administrated by a County Committee with a representative from each GAA unit in the County, a Management Committee and 22 sub-committees.[3] The county administrative headquarters and centre of excellence is located at Owenbeg, Dungiven.[3] 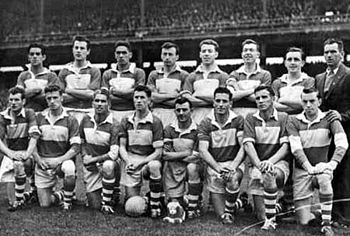 In 1947 Derry won the National Football League. The group leaders were invited to play in the League semi-finals because heavy snow had disrupted the competition. Francie Niblock scoring one of the finest goals in League history in Croke Park as Derry beat Clare. In 1958, the county won its first ever Ulster Senior Football Championship and caused a massive shock in that year's All-Ireland semi-final; beating Kerry thanks to a Sean O'Connell goal three minutes from the end. In the final, Derry scored a goal ten minutes into the second half through Owen Gribben, but Dublin secured victory with Paddy Farnan and Johnny Joyce goals.

In 1965 the Derry Minor team won the All-Ireland Minor Championship, and three years later at Under 21 the bulk of that team captured the All-Ireland Under 21 Championship. Derry won the Ulster Senior Championship three times in the 1970s (1970, 1975 and 1976), but failed to advance past the All-Ireland semi-final stage on each occasion. In 1973 Anthony McGurk became the first player from Derry to be awarded an All Star Award.

The 1990s was the county's most successful decade ever. They won the county's second National League title in 1992, before winning the Ulster Championship and the county's first ever All-Ireland Senior Football Championship in 1993. Derry won back-to-back National Leagues in 1995 and 1996, and the Under 21s won the 1997 All-Ireland Under 21 Championship. In 1998 Derry won another Ulster Senior Championship. The Derry side of the 1990s has been rated as one of the best of the last 20 years and would have achieved more only a couple of shock defeats such as Down in 1994, Tyrone in 1995 and Cavan in 1997.[5]

For more details on this topic including team line-ups, see here

Footballer of the Year

Two Derry players have been awarded the prestigious Texaco Footballer of the Year accolade. Ballymaguigan's Jim McKeever won the inaugural award in 1958, while Henry Downey of the Lavey club received player of the year for his performances in helping Derry win the 1993 All-Ireland Senior Football Championship.

Since the 1960s there has been a tradition of annually selecting the best footballer in each position, to create a special team of the year. Between 1963 and 1967 these players received what was known as Cú Chulainn awards. In 1971 these awards were formalised into the annual All Star Awards. Including Sean O'Connell's Cú Chulainn award in 1967, Derry have received 28 All Stars.

Since 2006 the Gaelic Players Association have chosen their own team of the year.

A number of Derry players have been selected to play International rules football for the Ireland team against Australia; both in the test games (1984, 1986, 1987 and 1990) and since the commencement of the International Rules Series in 1998. Note the table is incomplete.

As of National League game 1 February 2009 against Mayo 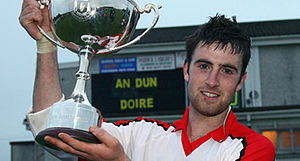 Derry City was a hotbed of early GAA activity, winning the Ulster Senior Hurling Championship in 1902/3? and 1908. However, soon after Gaelic football become the dominant sort and hurling activity declined (especially in the city).

The 1990s started with Derry claiming back-to-back Ulster Minor titles in 1990 and 1991. The Under 21 side won two more Ulster Under 21 Championships in 1993 and 1997. Derry won the All-Ireland 'B' Senior Hurling Championship in 1996 and the Ulster Intermediate Championship the following year.

In 2000 Derry won their first Ulster Senior Hurling Championship in 92 years, and successfully defended it the following year. The county also won the Ulster Minor Championship in 2001. The Seniors won the Nicky Rackard Cup in 2006, defeating Donegal in the final. Derry Under 21s claimed back-to-back Ulster Under 21 titles in 2007 and 2008.[7] 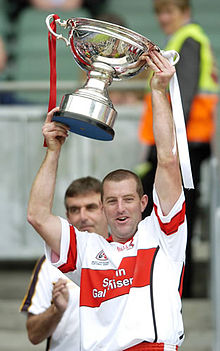 Derry has 40 affiliated clubs; 32 football, 2 hurling and 6 dual.[3] Many, or even most Derry GAA followers taken a keener interest in the club scene than the inter-county scene,[8] which can adversely effect attendances at Derry senior matches. The Derry Senior Football Championship is an annual club competition between the top Derry clubs. It is recognised as one of the hardest club championships to get out of successfully in Ireland, as there are so many teams like, Ballinderry, Bellaghy, An Lúb, Slaughtneil, Dungiven and Glenullin who have a realistic chance of success each year. Attendances at matches are particularly high, with many neutrals from County Tyrone also going to matches, as many view it as the highest standard of club football in Ulster. The winners of the Derry Championship qualify to represent their county in the Ulster Senior Club Football Championship and if they win, go on to the All-Ireland Senior Club Football Championship. The current (2010) Derry County Champions are Coleraine who defeated Ballinderry in the final. Bellaghy, Lavey and Ballinderry have won the All Ireland Club Championship, St Columbs and St Pats Maghera won the Hogan Cup, while St Pius have more recently won the MacLarnon and All Ireland B at senior level.

The Derry Senior Club Hurling Championship is the hurling equivalent, with Kevin Lynch's the defending champions (2008).

Swatragh qualified for the final of the All-Ireland Senior Club Camogie Championship in 2001. Lavey won the 2009 All Ireland junior club title.[18]

Notes: The above list of honours may be incomplete. Please add any other honours you know of.

The Camogie All Star Awards were first introduced in 2004[22] and Aisling Diamond of Bellaghy won became the first winner from Derry in 2007.[23]