The Down County Board of the Gaelic Athletic Association (GAA) (Irish: Cummann Luthchleas Gael Coiste An Dún) or Down GAA is one of the 32 county boards of the GAA in Ireland, and is responsible for Gaelic games in County Down. The county board is also responsible for the Down inter-county teams.

With just one loss in six appearances in All Ireland finals, Down have got a reputation for rising to the big occasion. Kitted out in their distinctive red and black, their massive fan base has been responsible for some of the largest match attendances in GAA history. Although in the last fifteen years they have been going through a very barren patch at senior level, despite various successes at underage level, in 2010 Down showed signs of improving by gaining promotion to the National Football League Division One and reaching the All Ireland Senior Football final - narrowly losing by 1 point to Cork. [1] [2] 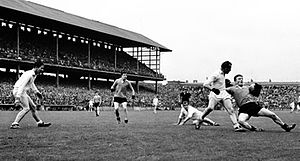 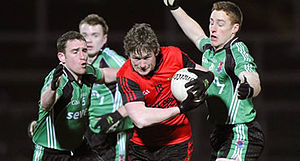 Down (red) in action against Queens University Belfast in the 2009 Dr. McKenna Cup

Down was not regarded as a Gaelic stronghold when Queen's University won the 1958 Sigerson Cup, and some of its leading players turned their thoughts to Down's inter-county dilemma. They took the 1959 Ulster title with six inter-changeable forwards who introduced off-the-ball running and oddities such as track-suits. In 1960 two goals in a three minute period from James McCartan and Paddy Doherty helped beat Kerry, who were almost completely unbeaten at the time, and which brought to an end the Kerry football regime for a few years, and they beat Offaly by a point in 1961 in a tremendous match that featured five first half goals. In that three-year period their loyal supporters smashed every attendance record in the book. When Down played Offaly in 1961 they set a record attendance of 90,556 for a GAA game. Against Dublin in the 1964 National League final a record 70,125 showed up. The 71,573 who watched them play Kerry in 1961 still stands as a record for an All-Ireland semi-final. In 1968 Down beat Kerry with Sean O'Neill and John Murphy goals, again in a two-minute spell. Despite a famous prediction that Down would go on to win three in a row, the county took twenty years to regain its status. In 1991 they surprised favourites Meath, Barry Breen giving them the goal that sent them into a lead of eleven points with 20 minutes to go, too far even for Meath. In 1994 Mickey Linden sent James McCartan in for a goal directly under Hill 16 which silenced Dublin and helped them claim their fifth title. Down teams through the years have played with great emphasis on attack often leading to the neglect of the defence. This system has cost Down teams in the past 10 years or so with the introduction of more negative tactics to quell forward lines with a massive emphasis on blanket defence.

In 2008 Down defeated Tyrone after a replay in the Ulster Senior Football Championship but fell to Armagh in the Ulster SFC Semi Final. Down went on to play Offaly in the All-Ireland SFC qualifiers. After a convincing 5-19 to 2-10 victory over Offaly, Down faced Laois in round 2 of the qualifers. Beating Laois by a single point, and with Dan Gordon being sent off, Down were through to the last round of the qualifiers where they played Wexford at Croke Park. Down had Dan Gordon's suspension removed, but awful conditions and poor Down performance resulted in a defeat to Wexford by a 2-13 to 0-12 scoreline.

In 2010 Down reached the All-Ireland Final after a narrow win over Kildare in the Semi-Finals. They lost to Cork at GAA Headquarters, the first time Down has tasted defeat in the All-Ireland Final. Cork were three points down at half-time but they upped the ante in the second-half and ran out 0-16 to 0-15 winners in the end. Down captain Benny Coulter's effort on 70 minutes and a fisted Daniel Hughes effort a minute into added time left the bare minimum in it and that was the way it stayed as Cork collected their seventh All-Ireland SFC crown in front of 81,604 spectators. 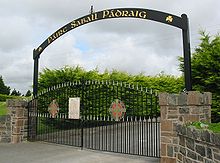 Down played in the Leinster Minor Hurling Championship for three years in the 1970s, even playing Antrim in an unusual Leinster semi-final in Croke Park in 1979. Four Down hurling clubs, Ballycran, Ballygalget, Portaferry and Bredagh play in the Antrim League. The first two used the experience to win Ulster Senior Club Hurling Championships. Ballygalget, Portaferry and Ballycran play in Antrim Div 1 while Bredagh play in Div 3. Although Down had not won the All Ireland B championship in four final appearances, when the Ulster Senior hurling championship was revived Down won titles in 1992, 1995 and 1997, losing the All Ireland semi-finals by 14, 11 and 16 points.

In 2007, the GAA announced that a hurling team from "South Down" (i.e. excluding the Ards peninsula) would compete in parallel to the main Down team,[3] to encourage hurling in an area of growing population where the game has not been strong.[4] While players from all of Down are eligible for the main Down team, Ards players cannot play for South Down. The new team competed in the National Hurling League 2008, recording their first win by beating Cavan at Ballela, scoring 4-15 to Cavan's 0-9. South Down then competed in the Nicky Rackard Cup 2008. It is playing in Division 4 of the 2009 National hurling league.