The Indian Institute of Technology Kanpur (Hindi: भारतीय प्रौद्योगिकी संस्थान कानपुर) (commonly known as IIT Kanpur or IITK) is a Central deemed University located in Uttar Pradesh, about 15 km north-west of the city of Kanpur in the Kalyanpur suburb. 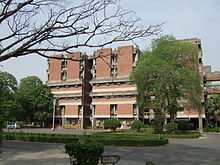 IIT Kanpur was established by an Act of Parliament in 1959. The institute was started in December 1959 in a room in the canteen building of the Harcourt Butler Technological Institute at Agricultural Gardens in Kanpur. In 1963, the institute moved to its present location, on the Grand Trunk Road near the village of Kalyanpur in Kanpur district.

Under the guidance of economist John Kenneth Galbraith, IIT Kanpur was the first institute in India to offer Computer Science education. The earliest computer courses were started at IIT Kanpur in August 1963 on an IBM 1620 system. The initiative for computer education came from the Electrical Engineering department, then under the chairmanship of Prof. H.K. Kesavan, who was concurrently the chairman of Electrical Engineering and head of the Computer Centre. Prof. Harry Huskey of the University of California, Berkeley, who preceded Dr. Kesavan, was instrumental in providing the impetus for the computer activity at IIT-Kanpur. In 1971, the institute initiated an independent academic program in Computer Science and Engineering, leading to M.Tech. and Ph.D. degrees.

In 1972 the KIAP program ended, in part because of tensions due to the U.S. support of Pakistan. Government funding was also reduced as a reaction to the sentiment that the IIT's were contributing to the brain drain. Since then IIT Kanpur has increased collaboration with industry and has achieved a reasonable level of stability.

Envisioned to bolster enhanced research in power, a Real Time Digital Simulation Facility at the Electrical Engineering department of the Indian Institute of Technology-Kanpur has started functioning on 22nd July, 2011.[3] 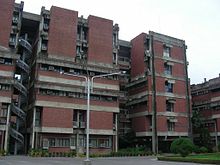 Postgraduate courses in Engineering offer Master of Technology (M.Tech) and Ph.D. degrees. The institute also offers M.B.A. (2 years), M.Sc. (2 years) and M.Des degrees. Admissions to M. Tech is made once a year through Graduate Aptitude Test in Engineering. Until 2011, admissions to the M.B.A. program are accomplished through the Joint Management Entrance Test (JMET), held yearly, and followed by a Group Discussion/Personal Interview process. In 2011 JMET was replaced by Common Admission Test (CAT).[6]

The academic departments at IIT Kanpur are 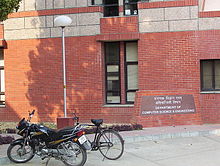 Department of Computer Science and Engineering at IIT Kanpur

Laboratories and other facilities 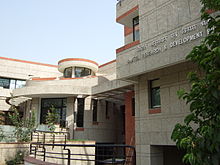 The institute has its own airfield, for flight testing and gliding.

P K Kelkar Library (formerly Central Library) is an academic library of the institute with a collection of more than 300,000 volumes, and subscriptions to more than 1000 periodicals. The library was renamed to its present name in 2003 after Dr. P K Kelkar, the first director of the institute. It is housed in a three-story building, with a total floor area of 6973 square metres floor area. The Abstracting and Indexing periodicals, Microform and CD-ROM databases. technical reports, Standards and thesis are part of the collection. Each year, about 4500 books and journal volumes are added to the collection. 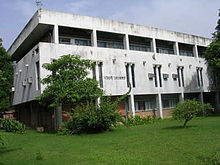 The Computer Centre has about 200-300 Linux terminals and more than 100 Windows-NT terminals supported by the PARAM 10000 supercomputer, and is continuously available to the students for academic work and recreation. It hosts about 50 SUN workstations. The IITs (and especially IIT Kanpur) and BITS Pilani are among the first large academic institutions in India to be networked[citation needed], with an institute-wide LAN and Ethernet access to every student room in the residence halls.

A team of students, working under the guidance of faculty members of the institute and scientists of Indian Space Research Organisation (ISRO) are set to launch India's first nano satellite 'Jugnu'.[7]

The institute has around 4,000 students with equal numbers of graduate and undergraduate students. 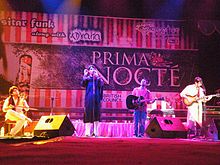 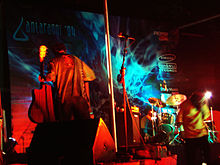 The students bring out a monthly newspaper, Vox Populi, the college magazine Meander and NERD, a science and technology magazine.

The students participate voluntarily in social services and organisations, "Prayas" being one of them, where they involve local underprivileged children in educational activities during their free time, conduct awareness programs and provide for campus visits. 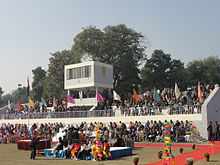 The Gymkhana has a say in the policy and decision making bodies of the institute. The President and the Convener of the Students' Senate are special Invitees to the Institute Academic Senate. The President is usually invited to the meetings of the Board of Governors when matters affecting students are being discussed. Nominees of the Students' Gymkhana are also members of the various standing Committes of the Institute Senate. All academic departments have Departmental Undergraduate and Post Graduate Committees consisting of members of the faculty and nominees of the Students' Gymkhana.

The aim of the Presidential Council shall be to help the President in discharging his/her duties and any other duty assigned by the Senate. The council consists of the following sub groups:

The aim of the Cultural Council is to organize and promote all cultural extra-curricular activities and any other duty assigned by the Senate. The council consists of following sub groups:

The aim of the Games Council is to organize and promote all extracurricular activities in the field of games and any other duties assigned by the Senate. The Council primarily looks over the following events and clubs:

The aim of the Films & Media Council is to organize and promote all Cinematic activities on behalf of the Students’ Gymkhana and any other duty assigned by the Senate. The FMC is responsible to look over the following:

The aim of the SnT council is to organize and promote all scientific and technological activities. Science and Technology Council is a part of Student's Gymkhana and provides opportunity and a platform for students to pursue their hobbies in field of science and technology.The Council currently comprises of 8 clubs and a Rubik's cube hobby group.

Research is controlled by the Office of the Dean of Research and Development. Under the aegis of the Office the students publish the quarterly NERD Magazine (Notes on Engineering Research and Development) which publishes scientific and technical content created by students. Articles may be original work done by students in the form of hobby projects, term projects, internships, or theses. Articles of general interest which are informative but do not reflect original work are also accepted.

Along with the magazine a student research platform PoWER Promotion of work Experience and Research has been started. Under it several independent student groups are working on projects like the Lunar Rover for ISRO, alternate energy solutions under the Group for Environment and Energy Engineering, ICT solutions through a group Young Engineers, solution for diabetes, green community solutions through ideas like zero water and zero waste quality air approach. A budget of Rs 1.5 to 2 crore has been envisaged to support student projects that demonstrate technology.

The students of IIT Kanpur made a nano satellite called Jugnu, This small satellite was given by president Pratibha Patil to ISRO for launch. . Jugnu is an Indian technology demonstration and remote sensing satellite which will be operated by the Indian Institute of Technology Kanpur. It is a nanosatellite which will be used to provide data for agriculture and disaster monitoring. It is a 3-kilogram (6.6 lb) spacecraft, which measures 34 centimetres (13 in) in length by 10 centimetres (3.9 in) in height and width. Its development programme cost around 25 million rupee. It has a design life of one year. Jugnu's primary instrument is the Micro Imaging System, a near infrared camera which will be used to observe vegetation. It also carries a GPS receiver to aid tracking, and is intended to demonstrate a microelectromechanical inertial measurement unit. Jugnu will be launched into low Earth orbit by a Polar Satellite Launch Vehicle flying from the Satish Dhawan Space Centre. The launch is currently scheduled to occur during 2011

The institute is part of the European Research and Education Collaboration with Asia (EURECA) programme since 2008.[8]

IIT Kanpur has set up the SIDBI Innovation and Incubation Centre in collaboration with the Small Industries development Bank of India (SIDBI) to foster innovation, research, and entrepreneurial activities in technology-based areas. SIIC provides a platform to business Start-ups to develop their ideas into commercially viable products.

SIDBI Innovation and Incubation Centre (SIIC) conducted the Nettech Summer Program 2007 for engineering students from all over India at IIT Kanpur Campus.[3][9] 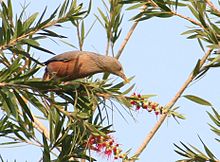