The Port of Boston, (AMS Seaport Code: 0401,[2] UN/LOCODE: US BOS), is a major seaport located in Boston Harbor and adjacent to the City of Boston. It is the largest port in Massachusetts as well as being one of the principal ports on the east coast of the United States.[1]

The Port of Boston was historically important for the growth of the City of Boston, and was originally located in what is now the downtown area of the city. Land reclamation and conversion to other uses means that downtown area no longer handles commercial traffic, although there is still considerable ferry and leisure usage of the downtown waterfront. Today the principal cargo handling facilities are located in the Boston neighborhoods of Charlestown, East Boston, and South Boston, and in the neighboring city of Everett. The Port of Boston has also been an entry point for many immigrants.[3]

Before the colonization of the Americas, the area served as a trading post for Native Americans in the region. After the establishment of the Boston settlement by John Winthrop in 1630 and the creation of a local shipbuilding industry, the port served the rapidly expanding American colonies. During that time, trade involved finished goods from England in exchange for lumber, fully constructed vessels, rum, and salted fish.

With the rapid growth of the Mid-Atlantic colonies in the 1750s, the ports of New York and Philadelphia, Pennsylvania began to surpass Boston for inter-colony trade. In response, Bostonian merchants established trade with foreign nations besides Great Britain. This trade led to a huge increase in wealth amongst Bostonian merchants. However, the British government's imposition of regulations restricting trade to Great Britain, combined with newly enacted taxes on the colonists, caused Bostonian merchants to join the more radical elements in American society. After the Boston Tea Party, the British Parliament passed the Boston Port Act which shut down the port until the East India Company was compensated for the damaged tea. These actions led to the American Revolutionary War.

Though economically devastated by the Revolutionary War, the Port of Boston was again prospering with trade with various foreign ports such as Shanghai. The port's fortunes were further augmented with a navy base at Charlestown. By the mid-19th century, the shipbuilding industry reached its peak as displayed by the clipper ships developed by Donald McKay. The port also saw many land reclamation projects and the construction of new piers.

With the start of the Industrial Revolution in the United States, activity in the port turned towards trade between the states. Starting in the mid-19th century, the Port of Boston was eclipsed yet again by other eastern seaboard ports such New York City as local merchant companies were bought out by New York businessmen. In 1956, control of the port was handed to the Massachusetts Port Authority (Massport), which began the process of modernizing the port. During the 1980s and 1990s, a project dedicated to the cleanup of Boston Harbor was overseen by the Massachusetts Water Resource Authority (MWRA).

In 1966, Sea-Land introduced containerized shipping and later established one of the first container ports on Castle Island, where Conley Terminal now stands. To meet the growing demand for container shipping, Massport constructed a common-use container port on what is now Moran Terminal. However, the port faced a setback with the closure of the Charlestown Navy Yard in 1974.

In the mid-1990s, the port went through another round of modernization. Container shipping operations were consolidated at Conley Terminal while Moran Terminal was dedicated to automobile shipping. A project of dredging the harbor commenced in 1997. Through the Central Artery/Tunnel Project (Big Dig), ground access to the South Boston facilities were improved with the extension of I-90 and the construction of the Ted Williams Tunnel linking South Boston with Logan International Airport. The port has also seen a burgeoning cruise industry as well as expanding commercial and residential developments on the Boston waterfront. 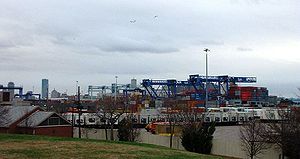 In 2006, the port handled over 14 million metric tons of cargo, including 201,000 container TEUs. Other major forms of cargo processed at the port include petroleum, liquefied natural gas (LNG), automobiles, cement, gypsum, and salt. There were about 208,000 cruise ship passengers and 81 cruise ship visits that year.[4]

In the wake of the September 11, 2001 attacks, there have been concerns about the security of LNG shipments within Boston Harbor, and increased fear of terrorism. Because of the location of the LNG terminal in the Mystic River, tankers traveling to and from the facility are forced to pass directly offshore of downtown Boston. During their voyage through the harbor, they are protected by a security zone that extends 2 miles (3.2 km) in front of the vessel, 1-mile (1.6 km) behind it, and more than half a mile on either side. This zone is enforced by escort vessels provided by the Coast Guard and State Police.[5] The Tobin Bridge is closed as the escort passes under it, and boating is forbidden within the security zone. As of 2005[update], there have been proposals to construct an offshore LNG facility in Massachusetts Bay.[6]

The MBTA operates commuter boats between Long Wharf and Rowes Wharf on the downtown Boston waterfront to Hingham, Hull, Quincy, and Logan Airport as well as inner harbor ferries between downtown Boston, Charlestown, and South Boston. Other fast passenger ferries operate to Provincetown and Salem. Several companies operate cruise boats on the harbor, whilst water taxis operate from various points on the downtown Boston waterfront, Logan Airport, Charlestown, East Boston, and South Boston.[7] Ferries are also provided for travel amongst the harbor islands.

There are occasionally marine accidents, as with a commuter ferry Massachusetts going from Boston's Rowes Wharf to Hull in June 2006.[8]

The Port of Boston has access to I-90, I-93, I-95, and U.S. 1, including a truck-only haul road.[9] A CSX rail yard in the Boston neighborhood of Brighton serves the port, though its operations are scheduled to move to Worcester, MA in late 2012[10]. Limited on-dock rail connections exist but are not currently used (as of 2011). There is public transit access via the MBTA Silver line SL2 route. 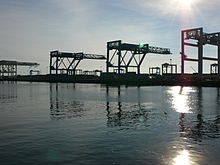 The public facilities, operated by the Massport, are located in the neighborhoods of Charlestown, East Boston, and South Boston. These include:

Aside from a US Coast Guard facility, the Port of Boston has facilities dedicated to bulk cargo, petroleum, and LNG shipment and storage. These are primarily located on the Mystic River, notably along the city of Everett waterfront as well as the Chelsea River area of East Boston, Chelsea, and Revere. The Chelsea River depots also contain facilities handling jet fuel for Logan International Airport. The Deer Island Waste Water Treatment Plant, whose 150-foot-tall (46 m) egg-shaped sludge digesters are major landmarks, ships treated sludge across the harbor by barge for further processing into fertilizer.

The naval frigate USS Constitution ("Old Ironsides") is berthed at the former Charlestown Navy Yard, now part of the Boston National Historical Park. The park is also home to the USS Cassin Young a World War II museum ship. A World War II era dry dock in the park was used for Constitution's 1992 overhaul. Two other World War II era drydocks in the harbor are still operational (as of 2007), including Dry Dock Number 3 — the largest dry dock on the U.S. East Coast. The Boston Harborwalk provides public access to much of the harbor's edge.

Boston's port was historically served by many more wharves and pier facilities. Although Massport maintain the more notable ones, a handful of docking facilities in the Boston Harbor are maintained by private interests or other state agencies such as DCR. Further, some wharves have been converted to residential condominiums, or hotel accommodations.

The Port's current and former wharves include: