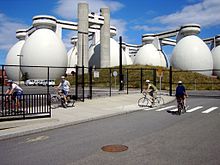 The Deer Island Waste Water Treatment Plant (also known as Deer Island Sewage Treatment Plant) run and operated by The Massachusetts Water Resources Authority is located on Deer Island, one of the Boston Harbor Islands in Boston Harbor. The water treatment plant cost over 3.8 billion dollars[citation needed] making it the seventeenth most expensive object ever constructed.[citation needed] The plant began operating in 1995.[1]

Deer Island is the second largest sewage treatment plant in the United States.[2] The plant is a key part of the program to protect Boston Harbor against pollution from sewer systems in eastern Massachusetts, mandated by a 1984 federal court ruling by Judge Paul G. Garrity in a case brought under the Clean Water Act.[3]

The plant removes human, household, business and industrial pollutants from wastewater that originates in homes and businesses in forty-three greater Boston communities.[citation needed] It complies with all federal and state environmental standards and subject to the discharge permit issued for it by EPA and DEP.[citation needed] The processing uses heat and microorganisms to break down solids and toxins from the effluent.[4] Its treated wastewater can safely be released into the marine environment.[citation needed] The plant uses primary and secondary treatment to remove 85% of pollution from the water.[citation needed] The resulting effluent is disinfected and then discharged through a 9.5-mile-long (15.3 km), 24-foot-diameter (7.3 m) outfall tunnel into the 100-foot-deep (30 m) waters of Massachusetts Bay.

Sludge removed from the waste is sent to an array of twelve 150-foot-high (46 m) egg-shaped sludge digesters, commonly known as "egg digesters", which are major Boston harbor landmarks. Each digester has a capacity of 3 million US gallons (11,000 m3) of sludge.[4] Methane from the digesters is captured and helps power the plant. Digested sludge is piped through a tunnel under the harbor to a plant in Quincy, Massachusetts that converts it to fertilizer pellets.[5][6]

Five workers were killed during construction of the outfall tunnel. In 1992, a drill operator was thrown from a drilling platform, and a laborer was crushed when a concrete panel fell on him. In 1995, an engineer was crushed inside the tunnel. In 1999, two divers asphyxiated when their air supply equipment malfunctioned as they were removing safety plugs from the diffuser outlets at the end of the tunnel.[7][8][9]