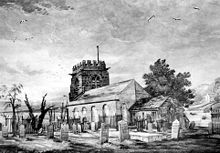 All Saints Church, Runcorn is the parish church of Runcorn, Cheshire, England. It is sited on the south bank of the River Mersey overlooking Runcorn Gap. The church has been designated by English Heritage as a Grade II* listed building.[1] It is an active Anglican parish church in the diocese of Chester, the archdeaconry of Chester and the deanery of Frodsham. Its benefice is combined with that of Holy Trinity, Runcorn.[2]

A church has stood on the site of the present church for centuries. There is a tradition that the first church was founded in 915 by Ethelfleda when she built a castle nearby. This church was dedicated to St Bertelin and was probably a simple structure of wood and thatch. There is no mention of Runcorn in the Domesday Book but there is evidence that Nigel, the first baron of Halton who died in 1080, conferred the church with a priest "in the days of the Conqueror". A medieval church was later built on the site. When this was demolished in the 19th century, Norman capitals were found in the masonry of its tower. Judging by the its Early English style of architecture, the medieval church would have been built around 1250. It was built in local sandstone. The chancel was rebuilt in the 14th century with tracery of the Decorated period in the east window. Also in the 14th century a tower was built at the west end of the church and this was either rebuilt or increased in size in the 15th century. A major item of the church furniture was a magnificent pre-Reformation rood screen. This was destroyed when the church was rebuilt in the 19th century, although a few fragments of it were used in building the present choirstalls. The nave of the church measured 52 feet (16 m) by 40 feet (12 m) and the embattled tower was 57 feet (17 m) high. At some time the dedication of the church was changed to St Bartholomew and later to All Saints.[3]

In the 18th century the south aisle was in a serious state of decay and in 1740 this was rebuilt in brick.[4] In 1801 the church was too small for the congregation so it was extended by enlarging the south aisle and adding galleries to this aisle and to the west end. The former Gothic windows were replaced by round-headed windows.[5] During the first half of the 19th century there was increasing concern about the fabric of the church. The tower was becoming dangerous and orders were given that the bells should not be rung. In 1817 it was recommended that the height of the tower should be reduced. The south wall of the chancel was leaning and only kept in position by its roof. The south aisle, built only 15 years previously, was sinking and gaps were appearing round the windows. It was concluded that the church should be demolished and replaced. Some temporary repairs were carried out but there was insufficient money available to rebuild the church at that time.[6] By the 1840s enough money had been raised and in September 1846 the last sermon was preached from the medieval church. The foundation stone for the new church was laid at Easter 1847 by Sir Richard Brooke of Norton Priory. On 11 January 1849 the new church was dedicated by Dr John Graham, Bishop of Chester. The architect was Anthony Salvin. The stained glass in the chancel windows was given by Sir Richard Brooke. A clock was installed in the tower in 1851. Three new lancet windows were added to the chancel in 1900.[7]

The church is built of Runcorn sandstone with a slate roof in Early English style.[8] Its plan consists of a nave of five bays with north and south aisles and a clerestory, a chancel which is lower and narrower than the nave, and a tower at the southwest corner of the nave. The tower is square with an octagonal spire. It has corner buttresses, large louvred lancets at the bell-stage, and two tiers of lucarnes springing from the base of the tower and from the broach. At the corners of the nave and the chancel are buttresses that rise up as spirelets. On the gables of the chancel and the nave are cross-finials and pinnacles. At the east end of the north aisle is the organ chamber and at the east end of the south aisle is a war memorial chapel. The windows along the clerestory are round with inset quatrefoils. All the other windows are lancets.[1][9]

The chancel is paved with Minton encaustic tiles. The marble reredos was given in 1888 and the alabaster altar rails in 1900. Mural tablets, some of which were moved from the old church, commemorate members of the Brooke family and previous vicars of the parish.[10] Also moved from the old church are a holy table from the late 17th century, a 18th-century wooden chest, the royal coat of arms of George III and a benefaction board from around 1700.[11] The oldest dated memorial is to two women who died in 1672 who are described as "both good wives". The next in age is a large tablet to the memory of Thomas Brooke, who died in 1737. Two memorials are by John Bacon. One is to Sir Richard Brooke, who died in 1792, which shows a putto unveiling an urn, and the other is to another Sir Richard Brooke who died in 1796, and shows a female figure by an urn. The memorial to Thomas Brooke, who died in 1820, is by B. F. Hardenburg of London. A memorial to another Sir Richard Brooke, who died in 1865, is a brass in the form of a cross. In the nave are a number of Georgian tablets including one to John Bankes, who died in 1817, by T. Grindrod. The Rev John Barclay, a former vicar of Runcorn who died in 1866, has an "ornately Gothic" memorial by Williams and Clay of Warrington with his portrait in relief. The stained glass in the chancel includes two windows with depictions of the Annunciation and the Resurrection. In the south aisle is a memorial to J. R. Hughes, who died at sea in 1874; "he is shown in the water wearing nothing but mutton-chop whiskers and a crown proferred by an angel".[9] The ring consists of eight bells which were cast in 1851 by Charles and George Mears of the Whitechapel Bell Foundry.[12] 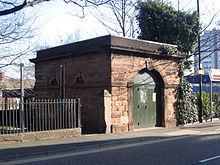 At the southeast corner of the churchyard is a former hearse house, which is now an electricity sub-station, dating from about 1833. It is a rectangular single-story building of red sandstone with a quarry tile roof. The door opening at the front has a wide semicircular arch with a keystone and springing blocks. Above this is a string course and a cornice with moulded eaves. On the west side and at the rear are small vents with semicircular heads and keystones. It is listed Grade II.[13]