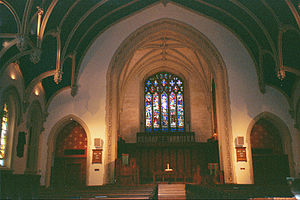 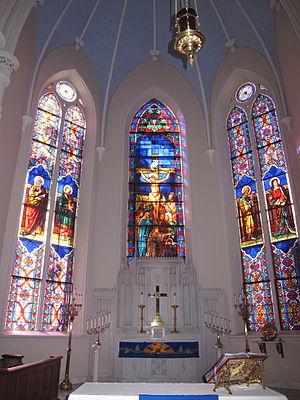 In church architecture, the chancel is the space around the altar in the sanctuary at the liturgical east end of a traditional Christian church building. It may terminate in an apse.

Following the exposition of the doctrine of transubstantiation at the fourth Lateran Council of 1215, clergy were required to ensure that the blessed sacrament was to be kept protected from irreverent access or abuse; and accordingly the area of the church used by the lay congregation was to be screened off from that used by the clergy. This distinction was enforced by the development of canon law, by which the construction and upkeep of the chancel was the responsibility of the rector, whereas the construction and upkeep of the nave was the responsibility of the parish.

As well as the altar, the chancel usually houses the credence table, and seats for officiating and assisting ministers. In Anglican and Methodist churches it will usually include the choir. In some traditions, the pulpit and lectern may be in the chancel, but in others these functions are considered proper to the nave.

The chancel is typically raised somewhat above the level of the nave, where the congregation gathers. It may be separated from the nave by a rood screen, a rail, or an open space. In some churches, the congregation may gather on three sides or in a semicircle around the chancel.

The word "chancel" derives from the French usage of chancel from a Late Latin word cancelli meaning "lattice".[1] This refers to the typical form of rood screens.

The chancel arch is the arch which separates the chancel (sanctuary or choir) from the nave of a church.