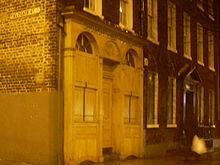 The Whitechapel Bell Foundry is a bell foundry in Whitechapel in the London Borough of Tower Hamlets, in the East End of London. The foundry is listed by the Guinness Book of Records as the oldest manufacturing company in Great Britain.[1] The foundry's main business is the bellfounding and manufacture of church bells and their fittings and accessories, although it also provides single tolling bells, carillon bells and handbells. The foundry's premises are a Grade II listed building.

The company now known as the Whitechapel Bell Foundry dates back to at least 1570 but a continuous line of master founders in Whitechapel or nearby Aldgate exists since 1420.

The present premises on Whitechapel Road date from 1670 and were formerly a coaching inn known as The Artichoke. The company moved there from smaller premises situated on the north side of the Whitechapel Road. At an earlier date the foundry was located at Aldgate.

Traditionally, the foundry has been known by the name of the Master Founder and owner, operating from the 19th Century to 1968 as Mears & Stainbank. It has since operated under the name of Whitechapel Bell Foundry.

The foundry has produced a number of famous bells, including many of those in the London churches commemorated in the children's rhyme Oranges and Lemons. Westminster Abbey is one of the most longstanding customers, the two bells that call people to services dating from the reign of Queen Elizabeth I. The current ring of ten bells was cast at Whitechapel in 1971.

One of the most historically significant bells cast at Whitechapel is the first casting in 1752 of the bell which was to become known as the Liberty Bell. This bell cracked when first rung and it was locally recast prior to its use in the proclamation of American Independence. Whitechapel cast a replacement to celebrate the bicentenary of American Independence in 1976.

Big Ben which tolls the hour at the Palace of Westminster was cast in 1858 and at 13½ tons is the largest bell ever cast at the foundry. This bell also cracked due to too heavy a hammer being initially installed. The crack and the subsequent retuning give Big Ben its distinctive tone. A profile template of Big Ben surrounds the entrance door while Big Ben's original moulding gauge is retained near the foundry's furnaces.[2]

Whitechapel supplied peals of 10 bells (later augmented to 12) for Guildford Cathedral in Surrey in the years following the Second World War, recast and augmented the bells of Canterbury Cathedral to a peal of 14 in 1981, and for the National Cathedral in Washington DC in 1964.

The names on this list are those that are cast into the surface of Whitechapel bells of different dates. Prior to Robert Mot, in 1574, the sign of three bells was often cast to indicate that it was a Whitechapel (or Aldgate) bell.[3][4]