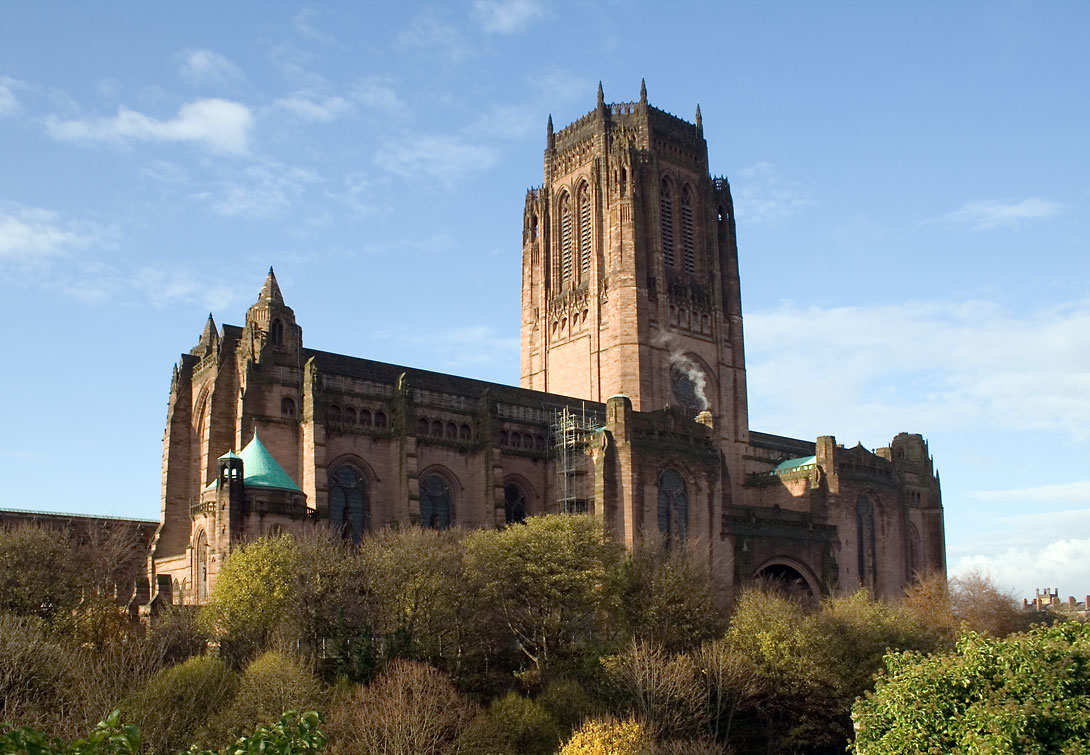 Liverpool Cathedral is the of , built on St. James' Mount in the centre of the city. It is the seat of the Anglican . Its official name is the Cathedral Church of Christ in Liverpool but it is dedicated to Christ and the Blessed Virgin. [cite web | url=http://www.liverpoolmetrocathedral.org.uk/ | title = Metropolitan Cathedral of Christ the king | accessdate = 2008-07-16]

The cathedral is one of the two cathedrals in the city. The other, the Metropolitan Cathedral of Liverpool, is situated around a mile to the north. Appropriately, in view of the divisions within , and particularly between the Anglican and Catholic Communions, the cathedrals are linked by Hope Street. This is purely coincidental: Hope Street takes its name from William Hope, a local merchant whose house stood on the site now occupied by the Philhamonic Hall, and was named long before either cathedral was built.

was installed as the first Bishop of Liverpool in 1880, but the diocese had no cathedral, merely a "pro-cathedral" in the rather ordinary parish church of St. Peter's, Liverpool. Following much debate, church and civic leaders agreed a new cathedral should be built and in 1902 held an open competition to select a design.

For architects, this was a very significant event; not only was it to be one of the largest building projects of the 20th century, but this was only the third opportunity to build an Anglican in England following the of the 16th century ( being the first, rebuilt from scratch after the in 1666, and being the second, built in the 19th century).

The attracted over 100 entries including designs from noted s such as and . In 1903 the assessors, George F. Bodley and , selected a proposal submitted by the 22-year-old student despite the fact that he had no previous buildings to his credit. The choice of winner was even more contentious with the cathedral committee when it was discovered that Scott was a , but the decision stood. (Ironically and conversely, the original architect of the Roman Catholic cathedral in , , was an .)

Although young, Scott was steeped in ecclesiastical design and well versed in the style with his grandfather, , and father both designing numerous churches. Due to Scott's inexperience, the cathedral committee appointed Bodley to oversee the detailed architectural design and building work. Bodley and Scott's collaboration, however, was a stormy one, with Scott reportedly verging on resigning before Bodley's death in 1907. Fact|date=September 2007

The foundation stone was laid by King Edward VII in 1904, with the first element, the Lady Chapel, opening in 1910. It was at this time that Scott, free of Bodley and growing in confidence, submitted an entirely new design for the remaining (main) part of the structure. Scott's original design was based on and had two towers at the west end, the revised plan called for a single central, exceptionally tall tower topped with a lantern. At the same time Scott change the style somewhat, losing much of the gothic detailing and introducing a significantly more modern, monumental style, even incorporating elements from 's competition entry. The cathedral committee approved the new plans, which also made the cathedral's interior much more spacious. With the altar completed, the church was consecrated in 1924, but regular services were not held until 1940. Construction of the tower was finished in 1942, but the and inflation slowed work and the completion of the building only came in 1978; too late for Scott, who died in 1960.

windows shows the artisans who designed and built it &mdash; Bodley and Scott are both shown, sitting together.

Admission to the cathedral is free but with a suggested donation of £3. It is open daily year-round from 8:00 am to 6:00 pm, and regular services are held every Sunday.

Every summer, Liverpool Cathedral plays host to - the city's annual theatre highlight presented by [http://www.lodestartheatrecompany.co.uk Lodestar Theatre Company] . This year from 31st July to 7th September 2008, the festival will feature a production of 'The Winter's Tale' by Shakespeare's Globe on their first ever visit to Liverpool, and Lodestar Theatre Company's magical new production of [http://www.theliverpoolshakespearefestival.co.uk A Midsummer Night's Dream] .

The Liverpool St. Andrew's congregation of the uses the Western Rooms of the Cathedral for Sunday services. Until the early-1980s the congregation worshipped in St Andrew's Church, Rodney Street (built in 1823 by the architect John Foster Jr, but now derelict).

At 219 ft above floor level, the bells of Liverpool Cathedral are the highest and heaviest ringing peal in the world. There are 13 bells, named the Bartlett Bells after Thomas Bartlett (d , ). Bartlett was a native of Liverpool who bequeathed the funding. They weigh a total of 16.5 tons and are grouped in a circle around the great 14.5 ton bourdon bell. The bells vary in size and note from the comparatively light 9cwt treble to the tenor weighing 82cwt (over 4 tons). The 13th bell (sharp 2nd) is extra to the main peal, and its purpose is to make possible ringing in a correct octave in a lighter key. All 13 bells were cast by bellfounders Mears & Stainbank of Whitechapel in London. The initial letters of the inscriptions on the 13 bells spell out the name “Thomas Bartlett” (from tenor to treble).

The bourdon bell "Great George" was cast by Taylors of Loughborough and at 14 tons 10cwt is the second only to "Great Paul" of in London. "Great George", named in the memory of King George V, is hung in a pendant position and is sounded by means of a counter-balanced clapper.

The organ, built by Henry Willis & Sons, is the largest in the UK with two five-manual consoles, 10,268 pipes and a . There is an annual Anniversary Recital on the Saturday nearest to 18th October, the date of the organ's consecration.

In 1931 the architect Giles Gilbert Scott asked to produce a series of sculptures for the Liverpool Anglican Cathedral. The project was an immense undertaking which occupied the artist for the next thirty years. The work for the cathedral included fifty sculptures, ten memorials and several reliefs. Carter Preston was an excellent carver of letter forms and many inscriptions in the catherdral were jointly written by the late Dean Dwelly and the sculptor who subsequently carved them.In 2003 Liverpool artist, Don McKinlay [http://www.donmckinlay.co.uk] ,who knew Carter Preston from his youth, was commissioned by the cathedral to model an infant Christ to accompany the 15th century Madonna by Giovanni della Robbia Madonna now situated in the Lady Chapel.