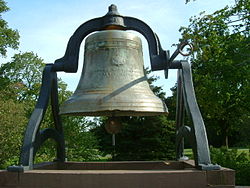 An 1894 McShane bell on the campus of Lake Forest Academy, Lake Forest, Illinois.

The McShane Bell Foundry, located in Glen Burnie, Maryland, is a maker of church bells. Since its founding in 1856 by Henry McShane, it has produced over 300,000 bells; at one time, the foundry also produced pipes and plumbing fixtures. It was featured on an episode of the Discovery Channel's Dirty Jobs.