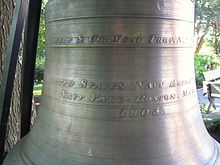 The Meneely Bell Foundry was a bell foundry established in 1826 in West Troy (now Watervliet), New York, by Andrew Meneely.[citation needed] Two of Andrew's sons continued to operate the foundry after his death, while a third son, Clinton H. Meneely, opened a second foundry across the river with George H. Kimberly in Troy, New York in 1870. Initially named the Meneely Bell Company of Troy, this second foundry was reorganized in 1880 as the Clinton H. Meneely Company, then again as the Meneely Bell Company. Together, the two foundries produced about 65,000 bells before they closed in 1952.[1][2]

Below is a sample of locations where Meneely Bell Foundry bells can be seen and heard:

Below is a sample of locations where bells from the second Meneely bell foundry can be seen and heard:

The Columbian Liberty Bell was cast by Clinton H. Meneely's foundry for display at the World's Columbian Exposition in Chicago in 1893. The bell disappeared while on tour in Europe. [14] [15] [16] [17]

The Meneely bell that hangs in St Anthony's Church in Prague was purchased by the Mid-European Union in October 1918 to commemorate the independence of Czechoslovakia after World War I and donated to the group's president, Thomas Masaryk, who became the head of the country's provisional government and, in 1920, the Czechoslovak president. The bell cost $2,000 and weighed 2,542 pounds (1,155 kg).