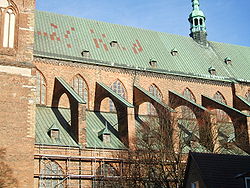 The church of St Nicolai, Stralsund. The clerestory is the level between the two green roofs.

/ˈklɪərstɔri/; lit. clear storey, also clearstory, clearstorey, or overstorey) is an architectural term that historically denoted an upper level of a Roman basilica or of the nave of a Romanesque or Gothic church, the walls of which rise above the rooflines of the lower aisles and are pierced with windows. In modern usage, clerestory refers to any high windows above eye level. In either case, the purpose is to bring outside light, fresh air, or both into the inner space. 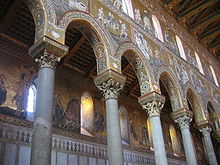 The walls of the clerestory of the "basilica" style Monreale cathedral are covered with mosaic.

The technology of the clerestory appears to originate in the temples of ancient Egypt. The term "clerestory" is applicable to Egyptian temples, where the lighting of the hall of columns was obtained over the stone roofs of the adjoining aisles, through slits pierced in vertical slabs of stone. Clerestory appeared in Egypt at least as early as the Amarna period.[1]

In the Minoan palaces of Crete such as Knossos, by contrast, lightwells were employed in addition to clerestories.[2]

The clerestory was used in the Hellenistic architecture of the Greeks. The Romans applied clerestories to basilicas of justice and to the basilica-like bath-houses and palaces.

Early Christian churches and some Byzantine churches, particularly in Italy, are based closely on the Roman Basilica, and maintained the form of a central nave flanked by lower aisles on each side. The nave and aisles are separated by columns or piers, above which rises a wall pierced by clerestory windows. 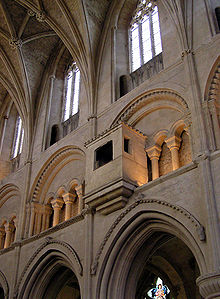 Malmesbury Abbey, Wiltshire, England. The nave wall is divided into three stages: the upper stage with windows is the clerestory, beneath it is the triforium, and the lowest stage is the arcade.

During the Romanesque period, many churches of the basilica form were constructed all over Europe. Many of these churches have wooden roofs with clerestories below them. Some Romanesque churches have barrel vaulted ceilings with no clerestory. The development of the groin vault and ribbed vault made possible the insertion of clerestory windows.

Initially the nave of a large aisled and clerestoried church was of two levels, arcade and clerestory. During the Romanesque period a third level was inserted between them, a gallery called the "triforium". The triforium generally opens into space beneath the sloping roof of the aisle. This became a standard feature of later Romanesque and Gothic large abbey and cathedral churches. Sometimes another gallery set into the wall space above the triforium and below the clerestory. This feature is found in some late Romanesque and early Gothic buildings in France.

In smaller churches, clerestory windows may be quatrefoils or spherical triangles (triangles whose edges are arcs of a circle). In some Italian churches they are ocular. In most large churches they are an important feature, both for beauty and utility. The ribbed vaulting and flying buttresses of Gothic architecture concentrated the weight and thrust of the roof, freeing wall-space for larger clerestory fenestration. In Gothic churches, the clerestory is generally divided into bays by the vaulting shafts that continue the same tall columns that form the arcade separating the aisles from the nave. 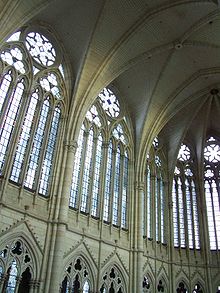 The clerestory of Amiens Cathedral is 12 metres tall, accounting for nearly a third of the height of the interior.

The tendency from the early Romanesque period to the late Gothic period was for the clerestory level to become progressively taller and the size of the windows to get proportionally larger in relation to wall surface.

By extension, "clerestory lights" are any rows of windows above eye level that allow light into a space. In modern architecture, clerestories provide light without distractions of a view or compromising privacy. Factory buildings are often built with clerestory windows; modern housing designs sometimes include them as well. Another example is the new Crosby Theatre of the Santa Fe Opera where the front and rear portions of the roof are joined by a clerestory window. Paolo Soleri uses clerestories in his work, calling them light scoops.[3]

The word "clerestory" is also used to denote a style of railway rolling stock (predominantly passenger), for example the Great Western Railway Clerestory carriage of the Victorian era had the windows in the roof 'cupola' which provided access to, and ventilation for, the vehicle's gas lighting.