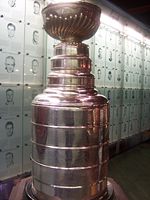 The Stanley Cup is an ice hockey club trophy, awarded annually to the National Hockey League (NHL) playoffs champion at the conclusion of the Stanley Cup Finals. It was donated by the Governor General of Canada Lord Stanley of Preston in 1892, and is the oldest professional sports trophy in North America.[1] Originally inscribed the Dominion Hockey Challenge Cup, the trophy started out as an award for Canada's top-ranking amateur ice hockey club in the Amateur Hockey Association of Canada. In 1915, the two professional ice hockey organizations, the National Hockey Association (NHA) and the Pacific Coast Hockey Association (PCHA), reached a gentlemen's agreement in which their respective champions would face each other for the Stanley Cup. After a series of league mergers and folds, it became the de facto championship trophy of the NHL in 1926. The Cup later became the de jure NHL championship prize in 1947.

Since the 1914–15 season, the trophy has been won a combined 95 times by 17 active NHL teams and five defunct teams. Prior to that, the challenge cup was held by nine different teams. The Montreal Canadiens have won the Stanley Cup 24 times and made the finals an additional nine times. There were two years when the Stanley Cup was not awarded: 1919, because of a Spanish flu epidemic, and 2005, because of the NHL lockout. 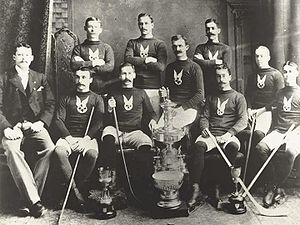 The origins of the Challenge era come from the method of play of the Amateur Hockey Association of Canada prior to 1893. From 1887 to 1893, the league did not play a round-robin format, but rather challenges between teams of the association that year, with the winner of the series being the 'interim' champion, with the final challenge winner becoming the league champion for the year. The Stanley Cup kept the tradition going, but added league championships as another way that a team could win the trophy. If a team in the same league as the current champion won the league championship, it would then inherit the Cup, without a challenge. The only time this rule was not followed was in 1904, when the Ottawa Senators club withdrew from its league, the CAHL. The trustees ruled that the Cup stayed with Ottawa, instead of the CAHL league champion.

During the challenge cup period, none of the leagues that played for the trophy had a formal playoff system to decide their respective champions; whichever team finished in first place after the regular season won the league title.[2] A playoff would only be played if teams tied for first-place in their leagues at the end of the regular season. Challenge games were played until 1912 at any time during hockey season by challenges approved and/or ordered by the Stanley Cup trustees. In 1912, Cup trustees declared that it was only to be defended at the end of the champion team's regular season.[3]

In 1908, the Allan Cup was introduced as the trophy for Canada's amateurs, as the Stanley Cup became a symbol of professional hockey supremacy.[4]

This table lists the outcome of all Stanley Cup wins, including successful victories and defenses in challenges, and league championships for the challenge era.

^ A. Although the Montreal Victorias won the AHAC title in 1895, the Stanley Cup trustees had already accepted a challenge from the 1894 Cup champion Montreal HC and Queen's University. As a compromise, the trustees decided that if the Montreal HC won the challenge match, the Victorias would become the Stanley Cup champions. The Montreals eventually won the game, 5–1, and their crosstown rivals were awarded the Cup.

^ B. Intended to be a best-of-three series, Ottawa Capitals withdrew their challenge after the first game.

^ C. The January 31 (a Saturday) game was tied 2–2 at midnight and the Mayor of Westmount refused to allow play to continue on the Sunday. The game was played on February 2 (a Monday) and the January 31 game was considered to be void.[7]

^ D. For most of 1904, the Ottawa Senators were not affiliated with any league.

^ E. The Montreal Wanderers were disqualified as the result of a dispute. After game one ended tied at the end of regulation, 5–5, the Wanderers refused to play overtime with the current referee, and then subsequently refused to play the next game of the series in Ottawa.

^ F. During the series, it was revealed that the Victoria club had not filed a formal challenge. A letter arrived from the Stanley Cup trustees on March 17, stating that the trustees would not let the Stanley Cup travel west, as they did not consider Victoria a proper challenger because they had not formally notified the trustees.[8] However, on March 18, Trustee William Foran stated that it was a misunderstanding. PCHA president Frank Patrick had not filed a challenge, because he had expected Emmett Quinn, president of the NHA to make all of the arrangements in his role as hockey commissioner, whereas the trustees thought they were being deliberately ignored. In any case, all arrangements had been ironed out and the Victoria challenge was accepted.[9][10]

Several days after the Victoria Aristocrats challenge of the Toronto Hockey Club, Stanley Cup trustee William Foran wrote to NHA president Emmett Quinn that the trustees are "perfectly satisfied to allow the representatives of the three pro leagues (NHA, PCHA and Maritime) to make all arrangements each season as to the series of matches to be played for the Cup."[11] One year later, the NHA and the PCHA concluded a gentlemen's agreement in which their respective champions would face each other for the Cup. Under the new proposal, the Stanley Cup championship finals alternated between the East and the West each year, with alternating games played according to NHA and PCHA rules.[12] The Cup trustees agreed to this new arrangement, because after the Allan Cup became the highest prize for amateur hockey teams in Canada, the trustees had become dependent on the top two professional leagues to bolster the prominence of the trophy.[13] After the Portland Rosebuds, an American-based team, joined the PCHA in 1914, the trustees issued a statement that the Cup was no longer for the best team in Canada, but now for the best team in the world.[12] Two years later, the Rosebuds became the first American team to play in the Stanley Cup championship final.[13] In 1917, the Seattle Metropolitans became the first American team to win the Cup.[14] After that season, the NHA dissolved, and the National Hockey League (NHL) took its place.[12]

In 1919, the Spanish influenza epidemic forced the Montreal Canadiens and the Seattle Metropolitans to cancel their series tied at 2–2–1, marking the first time the Stanley Cup was not awarded.[15]

The format for the Stanley Cup championship changed in 1922, with the creation of the Western Canada Hockey League (WCHL). Now three leagues competed for the Cup and this necessitated a semi-final series between two league champions, with the third having a bye directly to the final.[16] In 1924, the PCHA folded and only the Vancouver and Victoria teams entered the WCHL. With the loss of the PCHA, the championship reverted to a single series.[17] After their win in 1925, the Victoria Cougars became the last team outside the NHL to win the Stanley Cup.[18] For the 1925–26 season the WCHL was renamed the Western Hockey League (WHL). With the Victoria Cougars' loss in 1926, it would be the last time a non-NHL team competed for the Stanley Cup.

The WHL folded in 1926, and its assets were bought by the NHL. This left the NHL as the only league left competing for the Cup. Other leagues and clubs have issued challenges, but from that year forward, no non-NHL team has played for it, leading it to become the de facto championship trophy of the NHL.[17] In 1947, the NHL reached an agreement with trustees P. D. Ross and Cooper Smeaton to grant control of the cup to the NHL, allowing the league itself to reject challenges from other leagues that may have wished to play for the Cup.[20][21] A 2006 Ontario Superior Court case found that the trustees had gone against Lord Stanley's conditions in the 1947 agreement.[22] The NHL has agreed to allow other teams to play for the Cup should the league not be operating, as was the case in the 2004–05 NHL lockout.[21]

Unless marked otherwise, teams played in the NHL exclusively at the time they competed for the Stanley Cup. A bolded year denotes a Stanley Cup win.

Listed after the team name is the name of the affiliated league(s) when the team competed for the Stanley Cup. A bolded year denotes a Stanley Cup win

^ 1. The Toronto Maple Leafs won the Cup in 1918 as the Toronto Hockey Club,[23] (later engraved on the Stanley Cup as the Toronto Arenas in 1947), and in 1922 as the Toronto St. Patricks.
^ 2. The Chicago Blackhawks were known as the Chicago Black Hawks prior to the 1986–87 season.
^ 3. The Dallas Stars totals include two losses as the Minnesota North Stars.
^ 4. The Anaheim Ducks totals include one loss as the Mighty Ducks of Anaheim.
^ 5. The modern Ottawa Senators (1992–present) are the namesake of the original Senators (1883–1934).
^ 6. The Montreal Canadiens and the Seattle Metropolitans appearance totals include the 1919 Stanley Cup Final that ended with a no-decision because of the Spanish flu epidemic. It is not considered a loss by either team.