While the rules of the National Hockey League (NHL) follows the general rules of ice hockey, it differs slightly from those used in international games organized by the International Ice Hockey Federation such as the Olympics. 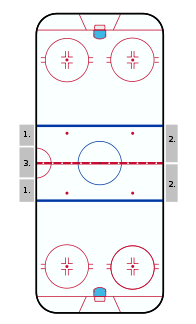 The hockey rink is an ice rink which is rectangular with rounded corners and surrounded by a wall, usually called the "boards". It measures 200 feet (60.96 m) long by 85 feet (25.91 m) wide in the NHL, whereas international standards call for a rink measuring 60 to 61 metres (196.9 to 200.1 ft) long by 29 to 30 metres (95.1 to 98.4 ft) wide. The center line divides the ice in half lengthwise. The center line is used to judge icing violations. There are two blue lines that divide the rink roughly into thirds. They divide the ice into zones. Near each end of the rink, there is a thin red goal line spanning the width of the ice. It is used to judge goals and icing calls. The "Blue" and "Red" Lines are 1 foot in width. All other markings on the ice (goal lines, circles, etc.) are 2 inches in width.

New in the 2005–06 season, after testing in the American Hockey League, is a trapezoid behind each goalie net. The goalie can only play the puck within that area or in front of the goal line. If he plays the puck behind the goal line and not in the trapezoid, a 2 minute minor penalty for delay of game will be assessed by the referees. This rule is widely referred to as the "Brodeur rule," after New Jersey Devils goalie Martin Brodeur, whose puckhandling behind the net is believed to be the cause for the rule.[1][2]

In the National Hockey League, between stoppages of play, teams have 18 seconds (five seconds for the visiting team, eight seconds for the home team, five seconds to line up at the faceoff location) to substitute their players, except during TV timeouts. TV timeouts are two minutes long, and occur three times per period: during normal game stoppages after the 6, 10, and 14 minute marks of the period, unless there is a power play, a goal has just been scored, or the stoppage was as a result of an icing. Each team may also take one 30 second time-out, which may only be taken during a normal stoppage of play.

A goal is scored when the puck completely crosses the goal line and enters the net. A goal may be disallowed under the following circumstances:

When a regular-season game is tied at the end of regulation, it goes into a 4-on-4, 5-minute overtime after a 1-minute rest period[4] with teams keeping the same attacking direction. When there is a goal during it, the game ends and the team that made that goal wins. If there is no scoring in the 5 minute overtime, it will go into a 3-frame shootout with the home team given the choice of shooting or defending first. This sequence ends when one team mathematically has more shootout goals than the other, thus winning the game. If neither team emerges victorious, the shootout continues one frame at a time until one team scores and the other does not, in which case the team who scores is given the win. A team that loses a game in overtime or the shootout will receive one point in the standings; the awarding of game points to losing teams is a point of debate among fans and the media.

Shootouts are not used in the playoffs; instead, a playoff game tied at the end of the regulation enters a 20-minute 5-on-5 sudden-death overtime. The game continues indefinitely in this format until a goal is scored; the team that scores immediately wins the game. Additional 20-minute overtime periods are played as necessary until the winning goal is scored. In this case the teams switches sides as usual between periods, with 15-minute intermission (normal length) between periods.[5]

In ice hockey, play is said to be offside if a player on the attacking team enters the offensive zone before the puck (unless the defensive team brings the puck into their own zone). A violation occurs when an offside player touches the puck. If a player crosses the line ahead of the puck but his team is not in possession of it, the linesman will raise his arm to signal a delayed offside; when all players from the offside team leave their offensive zone ("tag up" in the neutral zone) the linesman washes out the delayed call. When an offside violation occurs, the linesman blows the play dead, and a faceoff is conducted in the neutral zone. During the 2004-05 lockout, the league removed the "two-line offside pass" rule, which required a stoppage in play if a pass originating from inside a team's defending zone was completed on the offensive side of the center line, unless the puck crossed the line before the player. The removal of the two-line offside was one of several rule changes intended to increase overall scoring, which had been in decline since the early 1990s. The only time a player may precede the puck into the attack zone with the puck behind in the neutral zone is if none of his teammates are in the attack zone and the player with the puck has control of the puck in the estimation of the linesman(short-sticking/spin-o-rama)

Icing occurs when a player shoots the puck across both the center line and the opposing team's goal line without the puck going through the goal crease. When icing occurs, a linesman stops play if a defending player (other than the goaltender) touches the puck before an attacking player is able to. Play is resumed with a faceoff in the defending zone of the team that committed the infraction. Icing is not enforced for a team that is short-handed. If the goaltender makes a move from his net to play the puck, the icing is immediately waved off (in contrast to minor league and international hockey, where the goaltender must play the puck for it to be waved off). Icing can also be waved off if, in the officials' opinion, the defending team had a viable opportunity to play the puck before crossing the goal line. After an icing, a TV timeout cannot be called.

Following the 2004–2005 lockout, the icing rule insists that the team in violation of icing the puck is not allowed to make any line changes before the following faceoff.

The Trushinski bylaw says players who are blind in one or both eyes are ineligible to play. The rule is named for Frank Trushinski, a minor league hockey player for the Kitchener Greenshirts. Trushinski lost his sight in one eye in a game in 1921, but was allowed to continue playing. In a later game, he suffered a skull fracture which cost him most of the sight in his other eye.

A penalty is a punishment for infractions of the rules. A referee makes most penalty calls while the linesmen may call only obvious technical infractions such as too many men on the ice. In the NHL, the linesman may also call major intent-to-injure penalties that the referee may have missed.[citation needed]

During a penalty, the player who committed the infraction is sent to the penalty box. Small infractions are deemed minor penalties, and the player is kept off the ice for two minutes of gameplay. More dangerous infractions, such as fighting, are deemed major penalties and have a duration of five minutes. The penalized team cannot replace the player on the ice and is thus shorthanded for the duration of the penalty. Normally, hockey teams have five skaters (plus the goaltender) on the ice. If a minor or major penalty is called, play becomes "five-on-four" - five skaters versus four skaters.

This situation is called a power play for the non-offending team and a penalty kill for the offending team. A team is far more likely to score on a power play than during normal play. If the penalized team is scored on during a minor penalty, the penalty immediately terminates. Unlike minor penalties, major penalties must be served to their full completion, regardless of number of goals scored during the power play. When a penalty is about to be called, an official will raise his arm to signal what is referred to as a "delayed penalty". Play will continue until the offending team touches the puck, at which point, the official will blow the play dead and assess the penalty. If the team committing a penalty yields a goal and is already shorthanded because of a minor penalty, the penalty will be called when the goal is scored, and the team scoring a goal will be awarded a fresh power play. Furthermore, when goals are scored, penalties come off the board in the order in which they were called (if multiple penalties have been called).

There are exceptions to the rule where a team cannot replace a player on the ice after a penalty: mutual majors for fighting, where there are two participants in a fight, will result in each person receiving five minutes, but the penalties will not affect the on-ice strength of either team (play remains five-on-five), unless a player is deemed to be the instigator of the fight, in which case that player will receive an additional two-minute minor. There are also "coincidental" minors in which the penalties called against both teams are simultaneous and equal in length, so that neither team receives a power play, with teams skating four-on-four.

After the 2004–05 NHL lockout, a new rule was instituted that imposes a minor delay-of-game penalty on any defensive player who directs the puck out of bounds (e.g., over the glass into the stands or into the safety netting. When the puck is shot into either of the players’ benches, the penalty will not apply.

There are also game- and 10-minute-misconduct penalties which are reserved for infractions such as continued disputing of a call with an official or for intent-to-injure penalties. Misconducts do not affect the on-ice strength of the offending team, though they are usually accompanied with a minor, double minor, or five-minute major.[citation needed]

Various combinations of penalties may also result in match-ups such as 5-on-3, 4-on-3, 4-on-4 or even 3-on-3. A team, however, may not have fewer than 4 players (including the goaltender) on the ice at any point in the game.

After a penalty is assessed, play resumes with a face-off in the offending team's defensive zone under most circumstances.

Before each game, the coach from each team has to submit a list of players that will take part in the game. The roster can include a maximum of 18 skaters and two goaltenders. Teams will generally carry twelve forwards and six defencemen, creating four forward lines and three defensive pairings.

In August 2010, the NHL held an "R & D camp" at the Toronto Maple Leafs’ practice facility, where rule changes under consideration were given trial runs. Scrimmages at the camp, featuring some top players eligible for the 2011 NHL Entry Draft, experimented with changes such as two-on-two overtime, shallower goal nets, a referee viewing the play from an elevated off-ice platform, and a rink with three face-off circles instead of the traditional five.[6]

The following table lists some of the key differences between NHL and IIHF rules.