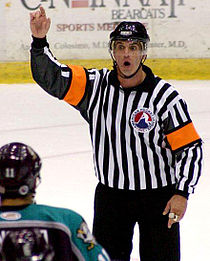 In ice hockey, an official is a person who has some responsibility in enforcing the rules and maintaining the order of the game. There are two categories of officials, on-ice officials, who are the referees and linesmen that enforce the rules during game play, and off-ice officials, who have an administrative role rather than an enforcement role. 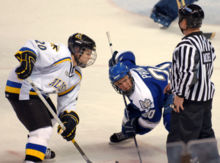 A linesman about to drop the puck during a faceoff.

As the name implies, on-ice officials do their job in the hockey rink. They are traditionally clad in a black hockey helmet, black trousers, a black-and-white striped shirt and black skates with white laces. They wear standard hockey skates and carry a finger whistle, which they use to stop play. They communicate with players, coaches, off-ice officials, both verbally and via hand signals. For many years (and currently in some minor and amateur leagues), officials had their last names on the back of their jerseys for identification, normally in a single row across the shoulders. (Some officials with long names would have their name in two rows, the most notable example being Andy Van Hellemond.) Starting in 1994, however, NHL officials wear numbers on their shirts, a procedure adopted by other leagues.

In the early days of hockey, the referees would be clad in a vest and tie along with their pants and carry a bell, not a whistle to stop the game in progress. In those days, penalties were assessed more on common sense rather than following strict rules, and the official(s) would deem what was allowed and not, as well as the length of the penalties.

A referee is responsible for the general supervision of the game and he can be identified by his red or orange armbands. Under most officiating systems, he is the only official with the authority to assess penalties for violations of the rules. However, the linesmen can also call a variety of penalties, such as "too many players", and major penalties if the referee was unable to identify the penalty. The referee also conducts the opening faceoff in each period and faceoffs that follow after a goal is scored, which are done at the center ice faceoff dot.

Linesmen are primarily responsible for watching for violations involving the center line and the blue line. Such infractions include icing and offside infractions. Linesmen also conduct faceoffs. They are also expected to break-up scuffles, and/or fistfights and other altercations that occur during the game. Some leagues allow linesmen to call penalties (such as too many players on the ice), while others only allow them to report the infraction to the referee.[1]

In some leagues, the linesmen are given the title of assistant referee. When given this title, they are given more responsibility to stop play and call penalties that the referee may not see. The NCAA previously used this designation prior to altering their officiating systems in 2006.

Off-ice officials, with the exception of the video goal judge in professional leagues, do not have any direct impact on the outcome of the game. They serve primarily administrative and advisory roles.

The goal judge determines whether a player has scored a goal by watching to see if the puck has crossed the goal line completely. They act only in an advisory role; the referee has the sole authority to award goals, and thus can override the opinion of the goal judge.

One goal judge is positioned outside the rink directly behind each goal net. For arenas so equipped, the goal judge turns on a red light behind the goal to signal a score. The red light (and the green light which is mounted next to it) are hooked up to the game clock: when the clock is stopped or the green light is turned on when the game clock reads :00, the red light cannot be turned on.

In 2006, the NHL began experimenting with goal judges in higher seats (most commonly the press box, a catwalk or the lower section of the upper deck) with wireless signals. The idea was to allow teams to sell the lower seats, but also to give officials a better view of the action as to be able to reject goals if violations (illegally kicked in, player in the crease, offside) took place. As of 2010, all teams except for Boston, Florida and Montreal locate goal judges in higher seats. In Vancouver and Nashville, one of the two goal judges is directly behind the net.

Goal judges were first used around 1877 in Montreal, and were initially called umpires.[4]

The video goal judge reviews replays of disputed goals. As the referee does not have access to television monitors, the video goal judge's decision in disputed goals is taken as final. In the NHL, goals may only be reviewed in the following situations: puck crossing the goal line completely and before time expired, puck in the net prior to goal frame being dislodged, puck being directed into the net by hand or foot, puck deflected into the net off an official, and puck deflected into the goal by the high stick (stick above the goal) by an attacking player. All NHL goals are subject to review, and although most arenas have a Video Goal Judge, often the "War Room" at the NHL office in Toronto make the final decision.

The penalty timekeeper records the penalties imposed by the referee. He is responsible for ensuring that the correct penalty times are posted on the score clock and that players leave the penalty box at the appropriate times.

The game timekeeper is responsible for stopping and starting the game clock.