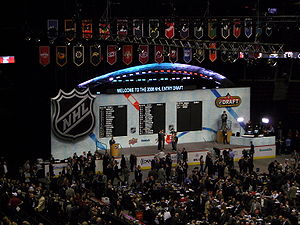 The stage of the 2008 NHL Entry Draft

The NHL Entry Draft is an annual meeting in which every franchise of the National Hockey League (NHL) systematically select the rights to available amateur ice hockey players who meet draft eligibility requirements (North American players 18–20 years old and Europeans of all ages entering league for the first time, all others enter league as unrestricted free agents). The NHL Entry Draft is held once every year, generally within two to three months after the conclusion of the previous season. During the draft, teams take turns selecting amateur players from junior, collegiate, or European leagues.

The first draft was held in 1963, and has been held every year since. The NHL Entry Draft was known as the "NHL Amateur Draft" up until 1979. The entry draft has only been a public event since 1980, and a televised event since 1984.[1] The order is determined by the standings at the end of the regular season, but with one team winning the NHL Draft Lottery and moving up 4 picks in the draft order. Teams at the bottom of the regular season standings are more likely to win the lottery.

The first NHL Entry Draft (at that time known as the "NHL Amateur Draft") was held on June 5, 1963 at the Queen Elizabeth Hotel in Montreal, Quebec.[1] Any amateur player under the age of 20 was eligible to be drafted. In 1979, the rules were changed allowing players who had previously played professionally to be drafted. This rule change was made to facilitate the absorption of players from the defunct World Hockey Association. Consequently, the name of the draft was changed from "NHL Amateur Draft" to "NHL Entry Draft". Beginning in 1980, any player who is between the ages of 18 and 20 is eligible to be drafted. In addition, any non-North American player over the age of 20 can be selected. From 1987 through 1991, 18 and 19-year-old players could only be drafted in the first three rounds unless they met another criterion of experience which required them to have played in major junior, U.S. college and high school, or European hockey.[1][2]

In 1980, the Entry Draft became a public event, and was held at the Montreal Forum. Prior to that year the Entry Draft was conducted in Montreal hotels or league offices and was closed to the general public.[1] The first draft outside of Montreal was held at the Metro Toronto Convention Centre in Toronto, Ontario, in 1985.[3] Live television coverage of the draft began in 1984 when the Canadian Broadcasting Corporation covered the event in both English and French for Canadian audiences. The 1987 Entry Draft, held at Joe Louis Arena in Detroit, Michigan, was the first NHL Draft to be held in the United States. SportsChannel America began covering the event in the United States in 1989.[1]

Prior to the development of the Draft, NHL teams sponsored junior teams, and signed prospects in their teens to the junior teams. Players were signed to one of three forms: the "A" form, which committed a player to a tryout; a "B" form, which gave the team an option to sign a player in return for a bonus; and the "C" form, which committed a player's professional rights. The "C" form could only be signed by the player at age eighteen or by the player's parents, often in exchange for some signing bonus.[4] The first drafts (up until the 1968 Amateur Draft) twere held to assign players who had not signed with an NHL organization before the sponsorship of junior teams was discontinued after 1968.

The selection order in the Entry Draft is determined by a combination of lottery, regular season standing, and playoff results. However, teams are permitted to trade draft picks. In all cases, the team considered is the original holder of the draft pick, not a team which may have acquired the pick via a trade or other means.[5][6]

At the conclusion of the regular season, the 14 NHL teams not qualifying for the playoffs are entered in a weighted lottery to determine the initial draft picks in the first round, seeded according to regular season standing. The 30th-place team has a 25% chance of winning the lottery, with odds diminishing to a 0.5% chance for the 17th-place team. A single selection from the lottery pool is made, with the winning team improving its draft position by up to four places, and no team dropping more than one place. Therefore, only the 26th through 30th place teams are eligible to receive the first overall draft pick.[7][8] Consequently, the 30th place team's chance of retaining the first overall pick improves to 48.2%.[5] The order in the remaining rounds is unaffected by the lottery and is based on regular season standings.

The remaining order is determined by the Stanley Cup playoff results.[8] Whichever team wins the Stanley Cup is awarded the 30th and last pick, while the runner-up is given the 29th pick. The teams eliminated in the conference finals are awarded the 28th and 27th picks, with the 28th pick going to the team with the better regular season record. Remaining division winners, then the rest of the field are ranked next, filling in the 26th through 15th picks. In both cases, better records result in later picks.[6]

When teams lose their rights to a first round draft choice, because that player was not signed to a contract and consequently re-entered the entry draft or became an unrestricted free agent, they are awarded a compensatory draft pick. This selection will be the same numerical choice as the first round draft pick who was not signed, but in the second round. For example, if a team cannot sign the seventh overall first round draft choice, it will receive the seventh pick in the second round of the next draft as compensation.[9]