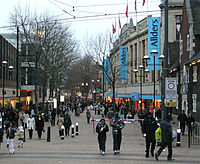 The eastern side of North End, showing on the right Allders and to the back left the Drummond Centre building of Centrale

North End is a pedestrianized road in Central Croydon which is the main equivalent to a high street in Croydon. The road holds both of the main shopping centres, Centrale and Whitgift Centre plus a forthcoming one called Park Place. The road offers many well-known shops such as WHSmith, Next, Zara and a large Primark. North End was closed off to all forms of motor traffic in 1989, to entice shoppers to choose Croydon over its main south-east London rival Bromley.

North End is the home of the only Allders left standing, after the company went into liquidation, which finally led to the collapse of the group apart from the Croydon flagship store which opened in 1862. This Allders is the fourth largest department store in Britain and boasts the largest carpet department in Europe.

Shops from east to west are: 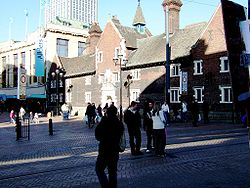 The Whitgift Almhouses on North End 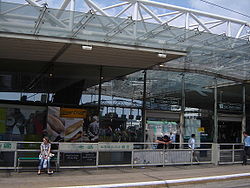 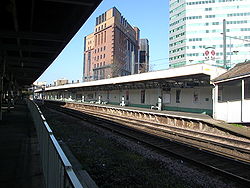 North End has excellent transport links both to the borough and to the surrounding areas in and out of London.

East Croydon station is the second busiest railway station in Greater London outside of Travelcard Zone 1. It is located about 5 minutes east of the shopping area. There are services to London Victoria and London Bridge in Central London, Horsham, Gatwick Airport, Redhill, Caterham, Brighton and Tunbridge Wells. The rail services are provided by Southern, Southeastern, First Capital Connect and Virgin Trains.

West Croydon station is located at the northern end of North End and provides rail services by Southern (and formerly South West Trains). The East London Line was extended to West Croydon as its new terminus; now forming part of the London Overground project that connects Croydon with Crystal Palace and New Cross to Highbury and Islington across the river and later once the work is completed to Clapham Junction (in 2012). From these places connections are made to places like Watford, London Euston, Barking, Stratford and Richmond. There is also a large bus station with many bus routes terminating there.

Tramlink also provides frequent services from the four nearby stops. Croydon Central railway station was a former station at what is now the Croydon Clocktower. It was built so that shoppers could get closer to the main district but the idea failed and it was all paved over.

Getting to Croydon by car is also feasible as there are numerous car parks around the centre including Centrale and Whitgift's own multi-story car parks.