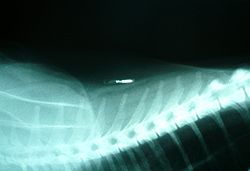 Microchip implant in a cat.

A microchip implant is an identifying integrated circuit placed under the skin of a dog, cat, horse, parrot or other animal. The chips are about the size of a large grain of rice and are based on a passive RFID (Radio Frequency Identification) technology.

The use of externally attached microchip devices such as RFID ear tags (piercings rather than implants) is another, related method commonly used for identifying farm and ranch animals other than horses. In some cases the external microchips may be readable on the same scanner as the implanted style.

Microchips have been particularly useful in the return of lost pets. They can also assist where the ownership of an animal is in dispute.

Animal shelters and animal control centers benefit using microchip identification products by more quickly and efficiently returning pets to their owners. When a pet can be quickly matched to its owner, the shelter avoids the expense of housing, feeding, providing medical care, and outplacing or euthanizing the pet. Microchipping is becoming standard at shelters: many require all outplaced animals to receive a microchip, and provide the service as part of the adoption package. Animal-control officers are trained and equipped to scan animals.

Several countries require a microchip when importing an animal to prove that the animal and the vaccination record match. Microchip tagging may also be required for CITES-regulated international trade in certain rare animals: for example, Asian Arowana are so tagged, in order to ensure that only captive-bred fish are imported.

Effective pet identification and recovery depend on the following:

Many veterinarians perform test scans on microchipped animals every time the animal is brought in for care. This ensures the chip still performs properly. Vets sometimes use the chip ID as the pet's ID in their databases, and print this number on all outgoing paperwork associated with its services, such as receipts, test results, vaccination certifications, and descriptions of medical or surgical procedures.

Components of a microchip

Microchips are passive, or inert, RFID devices and contain no internal power source. They are designed so that they do not act until acted upon.

Most microchips comprise three basic elements: A silicon chip (integrated circuit); a coil inductor, or a core of ferrite wrapped in copper wire; and a capacitor. The silicon chip contains the identification number, plus electronic circuits to relay that information to the scanner. The inductor acts as a radio antenna, ready to receive electrical power from the scanner. The capacitor and inductor act as a tuner, forming an LC circuit. The scanner presents an inductive field that excites the coil and charges the capacitor, which in turn energizes and powers the IC. The IC then transmits the data via the coil to the scanner. 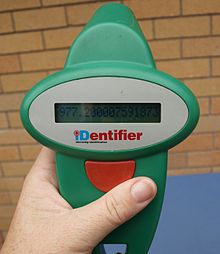 Example of an RFID scanner used with animal microchip implants.

These components are encased in a special biocompatible glass made from soda lime, and hermetically sealed to prevent any moisture or fluid entering the unit. Barring rare complications, dogs and cats are not affected physically or behaviorally by the presence of a chip in their bodies.

In dogs and cats, chips are usually inserted below the skin at the back of the neck, between the shoulder blades on the dorsal midline. Continental European pets may be an exception; they get the implant in the left side of the neck, according to one reference.[1] The chip can often be manually detected by the owner by gently feeling the skin in that area. It stays in place as thin layers of connective tissue form around the biocompatible glass which encases it.

Horses are microchipped on the left side of the neck, half the distance between the poll and withers, and approximately one inch below the midline of the mane, into the nuchal ligament.

Birds' microchips are injected into their breast muscles. Because proper restraint is necessary, the operation either requires two people (an avian veterinarian and a veterinary technician), or general anesthesia is administered. 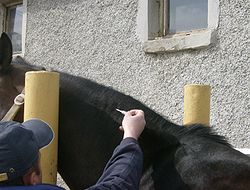 Microchips are not in universal use, but there are legal requirements in some jurisdictions, such as the state of New South Wales, Australia.[2] Some countries, such as Japan, require ISO-compliant microchips on dogs and cats being brought into the country, or for the person bringing the pet into the country to also bring a microchip reader that can read the non-ISO-compliant microchip.[3]

In New Zealand, all dogs first registered after 1 July 2006 are to be microchipped. Farmers protested that farm dogs should be exempt, drawing a parallel to the Dog Tax War of 1898.[4] Farm dogs were exempted from microchipping in an amendment to the legislation passed in June 2006.[5] A National Animal Identification and Tracing scheme in New Zealand is currently being developed for tracking livestock.

The National Animal Identification System is used in the United States. (It is applicable to farm and ranch animals rather than dogs and cats, and in most species other than horses, an external eartag device is typically used rather than an implant microchip. Eartags with microchips or those having only a visible stamped number can be used; either way, the 15 digit numbering scheme of the ISO type microchips is followed, using the U.S. country code of 840.)

In most countries, ID chips used in pets follow an international standard, enabling wide compatibility between the chips and scanners. But in the U.S., three proprietary types of chips compete for market share, along with the international type. Scanner models distributed to U.S. shelters and vets well into 2006 could each read at most three of the four types. (These "types" are also known as transmission protocols or standards) But now, several scanner models with quad-read capability are available, and increasingly, vets and shelters are considering these required equipment. Older scanner models continue to be distributed, and may be in use for some time, so U.S. pet owners still face a choice of getting a chip that gets best coverage on the older style scanners in use locally, or a chip with best acceptance in international travel. The four types include:

Numerous references in print state that the incompatibilities between different chip types are a matter of "frequency". One may find claims that early ISO adopters in the U.S. endangered their customers' pets by giving them ISO chips that work at a "different frequency" from the local shelter's scanner, or that the U.S. government considered forcing a change to a chip type that didn't operate at the same frequency as existing chips. The spread of these claims was little challenged by the manufacturers and distributors of the ISO chips, although later evidence suggests the claims were disinformation. In fact, all the pet chips operate slaved to the frequency of the scanner, and in practice, the ISO chips, although by design optimized to work best when given excitation energy at 134.2 kilohertz, have quite good readability working with 125 kilohertz excitation. Likewise, the "125 kilohertz" chip types are readable at 134.2 kilohertz. Confirmation of this comes from government filings which indicate that the supposed "multi-frequency" scanners now commonly available are really single-frequency scanners (each operating at 125 or 134.2 kHz, or an in-between frequency like 128 kHz.) In particular, the U.S. HomeAgain scanner didn't really change its excitation frequency when ISO-read capability was added; it's still a single frequency, 125 kHz scanner.[16]

Banfield Pet Hospitals for a length of time advocated and practiced double chipping with both ISO and "FECAVA" type chips. (By December 2009 they had switched back to ISO-only.) A consequence of an animal having multiple chips for any reason, whether by design or by oversight, is that, since typical shelter scanners stop scanning after finding one chip,[Note 7] and "Which one" can't be predicted, all of an animal's chip numbers need to be kept on file and address-updated with an appropriate database keeper for life. Presumably Banfield's enrollment forms had a space for "second chip number." The on-line enrollment forms of most registries could use some improvement in this regard. For best protection, the owner of multi-chipped pet may want to have each chip separately enrolled in its most customary or manufacturer-provided registry.

(For users requiring Shelter-Grade certainty, this table is not a substitute for testing the scanner with a set of specimen chips. One study[28] cites problems with certain Trovan chips on the Datamars Black Label scanner. In general the study found none of the tested scanners to read all four standards without some deficiency. The study predates the most recent scanner models, however.)

RFID chips are used in animal research, and tumors at the site of implantation have been reported in laboratory mice and rats.[29] Noted veterinary associations[30] responded with continued support for the procedure as reasonably safe for cats and dogs, pointing to rates of serious complications on the order of one in a million in the U.K., which has a system for tracking such adverse reactions and has chipped over 3.7 million pet dogs. A recent study found no safety concerns for microchipped animals with RFID chips undergoing MRI at one Tesla[31]