Dwarka
This article is about a city in Gujarat. For the sub-city in Delhi, see Dwarka (Delhi). For the kingdom of Dwaraka in Indian epic literature, see Dwaraka Kingdom.

pronunciation (help·info) (Sanskrit: द्वारका, Gujarati: દ્વારકા) also spelled Dvarka, Dwaraka, and Dvaraka, is a city and a municipality of Jamnagar district in the Gujarat state in India. Dwarka (Dvaraka in Sanskrit - used in this article when referring to the city in a historical context), also known as Dwarawati in Sanskrit literature is rated as one of the seven most ancient cities in the country. The legendary city of Dvaraka was the dwelling place of Lord Krishna. It is believed that due to damage and destruction by the sea, Dvaraka has submerged six times and modern day Dwarka is therefore the seventh such city to be built in the area.[citation needed]

The modern city of Dwarka is located in the Jamnagar District of Gujarat. The city lies in the westernmost part of India.

Among seven holy sites of India

Moreover, Dwarka is one of seven most holy places for Hindus in India where Varanasi is considered as the holiest of the seven holy cities.

A Kṣetra is a sacred ground, a field of active power, a place where Moksha, final release can be obtained. The Garuda Purana enumerates seven sites as giver of Moksha, They are Ayodhya, Mathura, Māyā, Kāsi, Kāñchī, Avantikā and Dvārāvatī.[1] 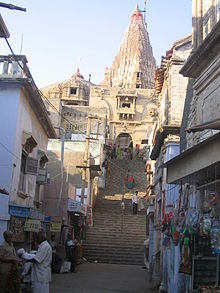 The present temple was built in 16th century CE, while the original temple was believed to have been built by Krishna's great grandson, King Vajra. The 5-storied temple is made of limestone and sand. A flag hoisted in the temple tower five times each day. There are two gateways - Swarga Dwar, where pilgrims enter, and Moksha Dwar, where pilgrims exit. From the temple one can view the Sangam (confluence) of River Gomati flowing towards the sea. In Dwaraka, there are also shrines for Vasudeva, Devaki, Balarama and Revati, Subhadra, Rukmini Devi, Jambavati Devi and Satyabhama Devi.

There is a special temple for Rukmini Devi on the way to Bet Dwarka temple, which can be reached by boat. A similar deity of Lord Dwarakanath is also kept in Bet Dwaraka. The temple has many Shrines for Lakshmi Narayana, Trivikrama, Jambavati Devi, Satyabhama Devi and Rukmini Devi.

The city derives its name from word dvar, meaning door or gate in Sanskrit. Dwarka is considered to be one of the holiest cities in Hinduism and one of the Char Dham along with Badrinath, Puri, Rameswaram. The city is especially respected by Vaishnavas.

The Jagatmandir temple which houses the Dwarkadhish, a form of Krishna, is also located in Dwaraka.

Nageshvara Jyotirlinga, one of the 12 holy shrines of Shiva, is located near Dwaraka.

Dwarka is also the site of Dvaraka Pitha, one of the four cardinal mathas established by Adi Shankara, the others being those at Shringeri, Puri and Jyotirmath.

Adi Shankara had visited Dvarakadisha Shrine and had established the Dvaraka Pitha. The Lord here is dressed in Kalyana Kolam where he appears to be a Royal Wedding costume. It is one of the 108 Divya desams.

There are many Darshan and Sevas for Lord Dwaraknath. The dress is changed accordingly. The Darshans follow the Pushti Marg Vaishnava scriptures established by Shree Vallabhacharya and Shree Vitheleshnathji. Dwarkadhish temple is a Pushti Marg Temple. The Darshan are 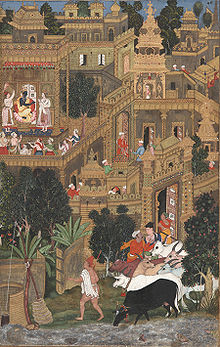 Dwarka is mentioned in the Mahabharata, the Harivansha, the Bhagavata Purana, the Skanda Purana, and the Vishnu Purana. It is said that this Dwarka was located near the site of the current city of Dwarka, but was eventually deserted and submerged into the sea.

Krishna renounced war in Mathura for the greater good of the people living in the region (and was hence known by the name Ranchodrai') and founded the city of Dwarka. Sri Krishna had previously killed Kansa (an oppressive king who ruled the city, and his maternal uncle) and made Ugrasen (Kansa's father and his maternal grandfather) the king of Mathura. Enraged, the father-in-law of Kansa, Jarasandha (king of Magadha) with his friend Kalayavan attacked Mathura 17 times. For the safety of the people, Krishna and the Yadavas decided to move the capital from Mathura to Dvaraka. -- Jarasandha lost all the 17 times he fought and his complete army was killed. Jarasandha attacked with 18 akshosainya each time. The Mahabharat war of Pandavas & Kauravas consisted of 11 Akshosainya. (1 Aksho sainya describes 1000 horse riders 1000 elephant riders 2/3 thousand on foot something like that the figures for number of horse riders etc are not exact but Akshosainya is used & has a exact figures) Krishna left before Jarasandha was about to attack 18th time. Jarasandha lived for 800 to 1000 years & Bhisma also lived for little above 800 years of which 532 years he spent in learning.

Characteristics of the City

The city was built by Vishwakarma on the order of Lord Krishna. Land was reclaimed from the sea near the western shores of Saurashtra. A city was planned and built here. Dwarka was a planned city, on the banks of Gomati River. This city was also known as Dvaramati, Dvaravati and Kushsthali. It had six well-organized sectors, residential and commercial zones, wide roads, plazas, palaces and many public utilities. A hall called "Sudharma Sabha" was built to hold public meetings. The city also boasted having the possession of a good sea harbour. The city had 700,000 palaces made of gold, silver and other precious stones. Each one of Lord Krishna's 16108 wives had her own palace. Besides this, the city had beautiful gardens filled with flowers of all seasons and beautiful lakes.

Submersion into the Sea

After Krishna left the earth for Vaikunta,about 36 years after the Mahabharat War (3138 BC), and the major Yadava leaders were killed in disputes among themselves, Arjuna went to Dwarka to bring Krishna's grandsons and the Yadava wives to Hastinapur, to safety. After Arjuna left Dwarka, it was submerged into the sea. Following is the account given by Arjuna, found in the Mahabharata:

...imposed on it by nature. The sea rushed into the city. It coursed through the streets of the beautiful city. The sea covered up everything in the city. I saw the beautiful buildings becoming submerged one by one. In a matter of a few moments it was all over. The sea had now become as placid as a lake. There was no trace of the city. Dwaraka was just a name; just a memory.

The Vishnu Purana also mentions the submersion of Dwarka, stating

On the same day that Krishna departed from the earth the powerful dark-bodied Kali Age descended. The oceans rose and submerged the whole of Dwarka.

Main article: Marine archaeology in the Gulf of Cambay 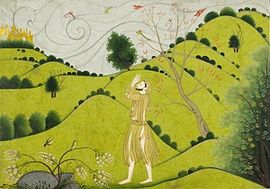 Sudama bows at the glimpse of Krishna's golden palace in Dwarka. ca 1775-1790 painting 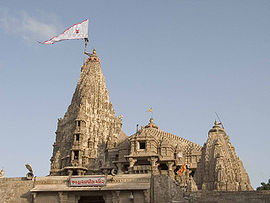 On May 19, 2001, India's science and technology minister Murli Manohar Joshi announced the finding of ruins in the Gulf of Khambhat. The ruins, known as the Gulf of Khambhat Cultural Complex (GKCC), are located on the seabed of a nine-kilometer stretch off the coast of Gujarat province at a depth of about 40 m. The site was discovered by a team from the National Institute of Ocean Technology (NIOT) in December 2000 and investigated for six months with acoustic techniques.

A follow up investigation was conducted by the same institute in November 2001, which included dredging to recover artifacts. A round of further underwater explorations was made in the Gulf of Khambhat site by the NIOT team from 2003 to 2004, and the samples obtained of what was presumed to be pottery were sent to laboratories in Oxford, UK and Hannover, Germany, as well as several institutions within India, to be dated.

Bet Dwarka is famous for its temples dedicated to Lord Krishna and is of great importance in the ancient Hindu tradition. It and other coastal sites have ample antiquities, mainly potsherds, suggesting maritime trade and commerce with the Mediterranean countries around the Christian era.[3] This flourishing harbor and religious capital is believed to have submerged under the sea after the Krishna left dwarka for vaikunth.[3]

A team of archeologists have carried out onshore and inter-tidal zone explorations and a few trial trenches were laid to trace a proper cultural sequence. The most potential sites, where a large number of antiquities were recovered are the sectors, Bet Dwarka-I, II, VI, and IX.

The findings of Bet Dwarka may be divided into two broad periods: Pre-historic period which includes a small seal of conch shell engraved with a three-headed animal motif,[4] two inscriptions, a copper fishhook and late Harappan pottery (circa 1700-1400 BC) and the Historical period consisting of coins and pottery. Onshore and inter-tidal zone explorations have indicated some kind of shoreline shifting around the Bet Dwarka island as a few sites get submerged during high tide.

Offshore explorations near present Bet Dwarka brought to light a number of stone anchors of different types that include triangular, grapnel and ring stones. They are made out of locally available rocks and their period may also be similar to those found at Dwarka and other places. Recently, Roman antiquities including shreds of amphorae and a lead ingot and lead anchors were found. There is also an indication of a shipwreck of Roman period in Bet Dwarka waters.

The archaeological explorations at Bet Dwarka Island have brought to light a large number of data on India’s external overseas trade and commerce with western countries. Recent findings at the Bet Dwarka have shown evidence of Indo-Roman trade. India had an active maritime trade with Rome from the fourth century BCE to 4th century CE. These findings would concentrate on the time period from the first century BCE to the 2nd century CE. The discovery of the amphoras in Bet Dwarka is significant in view of the maritime history of India in concerned. There are remains of seven amphoras from which a black encrustation can be seen. This ware was mainly used for exporting wine and olive oil from the Roman Empire; it is most likely that these were wine amphoras. The discovery of a large quantity of amphora sherds suggests that Bet Dwarka had international trade contact during the early centuries of the Christian era.[3] The findings present the possibility of a shipwreck in this area associated with Roman trade, though it is unlikely that the remains of the hull of the wreck survive.[3] Thus the presence of Roman amphoras show that Roman ships reached Bet Dwarka waters earlier than has been previously noted. These same archaeological findings along with anchors have indicated the existence of several ports, jetties and anchoring points along the west coast of Indian. Though there are no remains of an ancient jetty at Bet Dwarka, the presence of stone anchors in the intertidal one indicates that the high tide was effectively used for anchoring the boats.[5] The presence of a large number and variety of stone anchors in Bet Dwarka suggests that this was one of important ports in ancient times. The location of Bet Dwarka was favorable for safe anchorage in the past since it was protected from high waves and storms.

The proposal for the Dwarka museum, submitted by the MAU, involves laying a submarine acrylic tube through which visitors can view through glass windows the ruins of the city. The State Government of Gujarat and the Travel & Tourism Department of Gujarat are working on this proposal (for over two decades). When completed, it will be the first museum to be built under the sea.