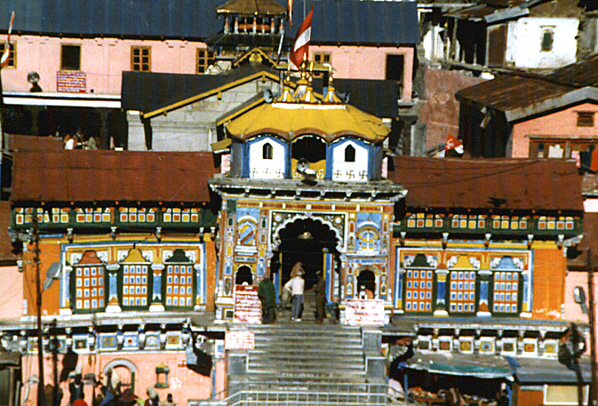 Badrinath temple, sometimes called Badrinarayan temple, is situated along the river, in the hill town of in state in . It is widely considered to be one of the holiest temples, and is dedicated to . The temple and town are one of the four pilgrimage sites. It is also one of the 108 , holy shrines for Vaishnavites. The temple is open only six months every year (between the end of April and the beginning of November), due to extreme weather conditions in the Himalayan region.

Several s are worshipped in the temple. The most important is a one meter tall statue of as Lord Badrinarayan, made of black stone. The statue is considered by many Hindus to be one of eight "swayam vyakta keshtras", or self-manifested statues of Vishnu.

, or main shrine area. The walls and pillars of the mandapa are covered with intricate carvings.

The main shrine area houses the black stone image of Lord Badrinarayan, sitting under a gold canopy, under a Badri Tree. There are fifteen more murtis around the temple that are also worshipped. These include murtis of Nara & Narayana, (the fourth incarnation of Vishnu), , , , , , (the vehicle of Lord Narayan), and .

The Tapt Kund hot sulphur springs just below the temple are considered to be medicinal&mdash;many pilgrims consider it a requirement to bathe in the springs before visiting the temple. The springs have a year-round temperature of 45°C.

Although Badrinath is located in the far north of India, the head priest, or Rawal, is traditionally a Brahmin from the far south of India in . This tradition was begun by , who was a . The Rawal is assisted by Dimri Pundits belonging to Village Dimmer of . is one of the few temples in that follow the ancient Tantra-Vidhi of tradition more common in . Devotees of all faiths and all schools of thought of Hinduism visit the place. Many religious heads of various Muths, such as Jeeyar Mutt (Andhra mutt), Sringeri, Kanchi, Udupie Pejavar and Manthralayam Sri Raghavendra Swamy Muths have their branches/guest houses.

Badrinath was originally established as a pilgrimage site by , founder of the Advaitha Philosophy of the Sanatana Dharma (as he referred to in the ninth century. Shankara discovered the image of Badrinarayan in the Alaknanda River and enshrined it in a cave near the Tapt Kund hot springs.

The temple has undergone several major renovations, due to age and damage by avalanche.

Badrinath is mentioned in religious texts as far back as the Vedic period. Some accounts claim that the temple was built on a former Buddhist temple site.

One legend explains the reason that Vishnu is shown sitting in , rather than reclining. According to the story, Vishnu was chastised by a sage who saw Vishnu's consort Lakshmi massaging his feet. Vishnu went to Badrinath to perform austerity, meditating for a long time in padmasana.

Another legend says that and were doing tapas in Badrinath. came in disguise as a small boy, crying loudly and disturbing them. asked the reason for his crying and he replied that he wanted Badrinath for meditation. and found that it was Lord in disguise. They then left Badrinath and moved to .

According to the Srimad Bhagavatam, "There in Badrikashram the Personality of Godhead (Vishnu), in his incarnation as the sages Nara and Narayana, had been undergoing great penance since time immemorial for the welfare of all living entities."

The Badrinath temple is one of five related shrines called Panch Badri that are dedicated to worship of Lord .

* "Vishal Badri": Badrinath Temple in Badrinath.
* "Yogadhyan Badri": located at Pandukeshwar. It also has an image of Badrinath in meditative posture. Legend has it that King installed a statue here named Yogadhyan Badri.
* "Bhavishya Badri": 17 km from Jyotirmath at Subain. Legend says that when evil is on the rise in the world, Badrinath will become inaccessible and Lord Badrinath will appear at the Bhavishya Badri temple. Thus it is the future, or "Bhavishya" Badri.
* "Vridh Badri": 7 km from Jyotirmath in Animath. Vridh Badri means 'Old Badri.' Legend says this is where the Badrinath image was originally worshipped, before being enshrined at the current Badrinath.
* "Adi Badri": 17 km from . A temple complex consisting of sixteen small temples with intricate carvings houses a three foot black stone statue of Lord Vishnu.