The Chaozhou people (commonly known as Teochew) are Han people, native to the Chaoshan region of eastern Guangdong province of China who speak the Teochew dialect. Today, most Teochew people live outside China in Southeast Asia especially in Singapore, Thailand, and Malaysia. They can also be found almost anywhere in the world, including North America, Australasia and France. The diaspora, is estimated to contain over 10 million people, which is as much as the population of Chaoshan itself. The Teochow speak a language closely related to Hokkien, whilst Teochew cuisine is distinctive. The ancestors of the Teochew people moved to present-day Chaoshan from the Central Plains of China in order to escape from a series of civil wars during the Jin Dynasty.[1] The Teochews were typically known as the rich agriculturalists and merchants among the Chinese. Along with the Hokkien, Teochew are often referred to as the “Jews of China"[citation needed] because of their financial success. This continues to the present day, for example, the richest person in mainland China, Huang Guangyu, and the richest person of Chinese descent in the world, Li Ka-shing, are both of Teochew origin (and speak the language). Almost all Thai billionaires and millionares are of Teochew descent. Even though Teochew people comprise less than 2% of the Chinese population worldwide, they appear far out of proportion to their demographic numbers among the upper class and the wealthy Chinese.

Teochew can be romanised in a variety of schemes, and are known in Mandarin as Chaozhou ren and Cantonese as Chiuchao yan. In referring to themselves as ethnic Chinese, Teochew people generally use Deung nang (唐人; Mandarin: Tangren), literally Tang Dynasty people, as opposed to Hang nang (漢人/汉人; Mandarin: Hanren), which means 'Han Dynasty people'. Teochew people of the diaspora would generally use Hua nang (華人/华人; Mandarin: Huaren) to indicate Chinese heritage in a cultural sense.

Teochew people also commonly refer to each other as ga gi nang (家己人; Mandarin: jiajiren) which means 'our own people'.[2]

To situate the term into a contemporary sociocultural context, Teochew people in Chaoshan of today refer to themselves as Chaoshan people, rather than Teochew people.[citation needed]

Historically, these people were called Helao or Fulao, as they came mostly from Henan and Shanxi via Fujian,[1], with well-maintained language and customs from north-central China.[citation needed] As was recorded in pedigrees and ancient inscriptions, these people who had originally migrated to southern Fujian, especially from Quanzhou and Putian, made settlements toward Chaoshan in batches and soon spread all over the Chaoshan area.[when?] Geographic isolation and difficulty in traveling in the past made the Helao or Fulao become a relatively closed population. Recently, studies of genetic analysis supported that although all Han Chinese are indeed related and share a common root, the Teochew had closest links with the Minnan area of Fujian province and those from the Taihang Mountain range of north-central China.[1][3]

They are known to Cantonese speakers as "Hoklo", literally meaning "men of Fujian", although the term “Teochew” is used in the Strait Settlements in the 19th century and early 20th century. "Teochew" is derived from Teochew prefecture (Chaozhou Fu) the departmental city where they originate.[4]

Since the 19th century, due to disadvantaged circumstances, significant numbers of Teochew people left their homeland for Singapore and a new life.[5]

Early Teochew settlers could trace their origins to 8 counties/prefectures: Chao'an, Chenghai, Chaoyang, Jieyang, Raoping, Puning, Huilai and Nan'ao. Apart from these new immigrants leaving from Port Swatow, there were Teochews relocating to Singapore from Siam and Kepulauan Riau.

Today, Teochew is the second largest dialect in the island city-state.

Most of the Teochew descendants in Taiwan have already been "hokkienized" ("hoklonized"). They speak the Taiwanese Hokkien language instead of Teochew. Some of them consider themselves as being Hakka. However, there are still some Teochew in Chaojhou township (潮州鎮), in Pingtung County (屏東縣). 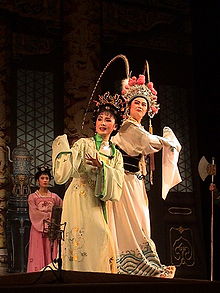 Teochew culture is indispensable in constructing the single cultural entity in Guangdong Province, and is known worldwide as a unique part of world heritage. Throughout the lengthy history of over 1000 years, the region of Chaoshan, anciently named Teochew Prefecture, has bred and evolved a prestigious culture, which manifests its unique characteristics in language, opera, cuisine, tea practice, music and embroidery.

The Teochew dialect (潮州話) is considered one of the oldest Chinese dialects for it preserves many features from ancient Chinese that have been lost in some counterparts.[citation needed] It is spoken by roughly 10 million people in Chaoshan and more than 5 million outside the Chinese mainland.

Teochew opera (潮劇) is a traditional art form which has a history of more than 500 years and is now loved by 20 million Teochew people in over 20 countries and regions. Based on the local folk dances and ballads, Teochew opera has formed its own style under the influence of Nanxi Opera. Nanxi is one of the oldest Chinese operas that originated in the Song Dynasty. Its tunes are graceful and pleasant, full of local colour. The old form of choral accompaniment still preserves its special features. Clowns and females are the most distinctive characters in a Teochew opera, and fan-playing and acrobatic skills are more prominent than in other types of performances.

Gongfu tea (工夫茶), the 'espresso' of Chinese teas with a formidable kick, which was first sipped back in the Song Dynasty, is still flourishing and standing as an important part of social etiquette in Chaoshan. It is not uncommon that the tea ritual is practised in an ordinary Teochew household on a day-to-day basis. Although it tastes bitter when it first reaches the mouth, it is the lingering aftertaste that makes Ganghu tea probably the most charming tea culture in China. Drinking Ganghu tea, in this sense, is a form of art rather than an antidote to thirst.

Teochew music (潮州音樂) is popularly played in Chaoshan's teahouse scene. The Teochew string instrument, gong, drum and traditional Chinese flute, are typically involved in the form of ensemble. The current Chaozhou drum music is said to be similar to the form of the Drum and Wind Music of the Han and Tang Dynasties.

Teochew woodcarving（潮州木雕) is a form of Chinese woodcarving originating from the Tang Dynasty. It is very popular in Chaoshan, Teochew people used a great deal of Teochew wood carving in their splendid buildings.

Yingge dance（英歌）is a form of Chinese folk dance originating from the Ming Dynasty. It is one of the most representative form of folk arts. The performers makeup into 108 Stars of Destiny, holding the two small stick or tambourine to perform。

Few movies or television dramas however have been made of the Teochew people, one such notable drama is the Singaporean 1995 epic The Teochew Family, which was produced by Singaporean pioneer television producer Chua Swan (蔡萱), brother of Chua Lam.