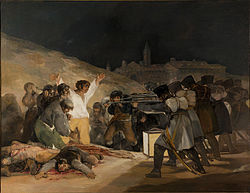 The Third of May by Francisco Goya 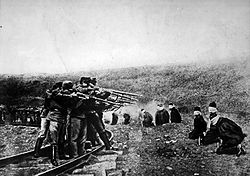 Serbian prisoners of war are arranged in a semi circle and executed by an Austrian firing squad, 1917 (World War I)

Execution by firing squad, sometimes called fusillading (from the French fusil, rifle), is a method of capital punishment, particularly common in the military and in times of war.

Execution by shooting is a fairly old practice. Some reasons for its use are that firearms are usually readily available and a gunshot to a vital organ usually kills the prisoner relatively quickly.

Before the introduction of firearms, bows or crossbows were often used — Saint Sebastian is usually depicted as executed by a squad of Roman auxiliary archers in around 288 AD; King Edmund the Martyr of East Anglia by some accounts was tied to a tree and shot dead by Viking archers on 20 November 869 or 870 AD.

A firing squad is normally composed of several soldiers or law enforcement officers. Usually, all members of the group are instructed to fire simultaneously, thus preventing both disruption of the process by a single member and identification of the member who fired the lethal shot. The prisoner is typically blindfolded or hooded, as well as restrained, although in some cases prisoners have asked to be allowed to face the firing squad without their eyes covered. Executions can be carried out with the condemned either standing or sitting. There is a tradition in some jurisdictions that such executions are carried out at first light, or at sunrise, which is usually up to half an hour later. This gave rise to the phrase "shot at dawn".

Execution by firing squad is distinct from other forms of execution by firearms, such as an execution by a single firearm to the back of the head or neck. However, the single shot (coup de grâce) is sometimes incorporated in a firing squad execution, particularly if the initial volley turns out not to be immediately fatal.

The method is often the supreme punishment or disciplinary means employed by military courts martial for crimes such as cowardice, desertion or mutiny. For military servicemen, the firing squad has a symbolic significance. The condemned soldier is executed by a group of his peers, indicating that he is found guilty by the entire group. Although a court-martial might be presided by and prosecuted by officers, the instruments of execution are the ordinary weapons fired by members of the group from which he is being expunged. Furthermore, in judicially approved executions, the condemned man is allowed to stand, rather than kneel; in many cultures, the ability or the will to stand in the face of adversity or danger is considered a salient feature of individual pride. Finally, the group action on one side (being the firing squad), with the condemned standing opposite, presents a visual contrast that reinforces to all witnesses that solidarity is an overriding necessity in a military unit.

In some cases one or more members of the firing squad may be issued a weapon containing a blank cartridge instead of one housing a live round.[1] No member of the firing squad is told beforehand if he is using live ammunition. This is believed to reinforce the sense of diffusion of responsibility among the firing squad members, making the execution process more reliable. It also allows each member of the firing squad to believe afterward that he did not personally fire a fatal shot[2] - for this reason, it is sometimes referred to as the "conscience round". While an experienced marksman can tell the difference between a blank and a live cartridge based on the recoil (the blank will have lower recoil), there is a psychological incentive to not pay attention and, over time, to remember the recoil as soft.[citation needed] In more recent times, such as in the execution of Ronnie Lee Gardner in Utah in the United States in 2010, a rifleman may be given a "dummy" cartridge containing wax instead of a bullet, which provides a more realistic recoil.[3] 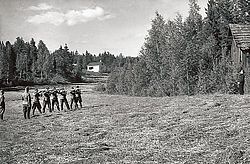 Soviet infiltrator being shot during the Continuation War.

The death penalty was widely used during and after the Finnish Civil War; some 9,700 Finns and an unknown number of Russian volunteers on the red side were executed during the war or its aftermath.[4] Most executions were carried out by firing squads after the sentences were given by illegal or semi-legal courts martial. Only some 250 persons were sentenced to death in courts acting on legal authority.[5]

During World War II, some 500 persons were executed, half of them condemned spies. The usual causes for death penalty for Finnish citizens were treason and high treason (and to a lesser extent cowardice and disobedience, applicable for military personnel). Almost all cases of capital punishment were carried out by court martial. Usually, the executions were carried out by the regimental military police platoon, or in the case of spies, by the local military police. One Finn, Toivo Koljonen, was executed for a civilian crime (sextuple murder). Most executions occurred in 1941, and during the Soviet Summer Offensive in 1944. The last death sentences were given in 1945 for murder, but later commuted to life imprisonment.[5]

The death penalty was abolished by Finnish law in 1949 for crimes committed during peacetime, and in 1972 for all crimes.[6] Finland is party to the Optional protocol of the International Covenant on Civil and Political Rights, forbidding the use of the death penalty in all circumstances.[7]

Following the 1916 Easter Rising in Ireland, 15 of the 16 rebel leaders were shot by the British military authorities under martial law. The executions have often been cited as a reason for how the rebels managed to galvanise public support in Ireland after their failed rebellion.[10]

During the Jordanian Siege of Jerusalem during 1948 Arab-Israeli War, the accurate Jordanian shelling of Israeli positions led to suspicion that a spy was operating. Meir Tobianski, a worker for the Israel Electric Corporation, was suspected since he knew the exact locations of several Israeli arms manufacturers, all of which received direct hits from Jordanian artillery. Tobianski was arrested at the Carmel Market in Tel Aviv. Orders to detain him for ten days were ignored, and he was instead interrogated and tried before a drumhead court-martial. Tobianski was found guilty, executed by a six-man firing squad. After an investigation, Tobianski was posthumously acquitted and reburied at Mount Herzl. Isser Be'eri, the officer who had ordered his execution and organized the firing squad, was tried for manslaughter. He was found guilty but pardoned by President Chaim Weizmann.[11]

Italy used the firing squad as only form of death penalty, both for civilians and military, since the unification of the country in 1861. The last execution took place on March 4, 1947, as Francesco La Barbera, Giovanni Puleo and Giovanni D'Ignoti, sentenced to death on multiple accounts of robbery and murder, faced the firing squad at the range of Basse di Stura, near Turin. Soon after the Constitution of the newly-proclaimed Republic prohibited the death penalty except for some crimes, like high treason, during wartime; no-one was sentenced to death after 1947. In 2008, the Constitution was amended to ban the death penalty altogether.

During the Mexican Independence War, several Independentist generals (such as Miguel Hidalgo and José María Morelos) were executed by Spanish firing squads.[12] Also, Emperor Maximilian I of Mexico and several of his generals were executed in the Cerro de las Campanas after the Juaristas took control of Mexico in 1867.[12] Manet immortalized the execution in a now-famous painting, The Execution of Emperor Maximilian; he painted at least three versions.

Firing squad execution was the most common way to execute a death sentence in Mexico, especially during the Mexican Revolution and the Cristero War.[12] After these events, the death sentence was reduced to some events in Article 22 of the Mexican Constitution; however, on June 18, 2008 capital punishment was abolished completely.[13]

Anton Mussert, a Dutch Nazi leader, was sentenced to death by firing squad and executed in the dunes near The Hague on May 7, 1946.[14]

Vidkun Quisling, the leader of Nasjonal Samling Party and of Norway during the German occupation in World War II, was sentenced to death by firing squad for treason and executed on October 24, 1945, at the Akershus Fortress.[15]

Jose Rizal was executed by firing squad on the morning of December 30, 1896, in what is now the Luneta Park where his remains were since placed.[16]

During the Marcos administration, drug trafficking was punishable by firing squad, as was done to Lim Seng. Execution by firing squad was later replaced by lethal injection. By June 24, 2006, President Gloria Macapagal-Arroyo abolished capital punishment by Republic Act 9346. Existing death row inmates, which totalled in the thousands, were eventually given life sentences or reclusion perpetua instead.[17]

In the United Arab Emirates, firing squad is the preferred method of execution.[18]

Execution by firing squad in the United Kingdom was limited to times of war, armed insurrection, and within the military, although it is now outlawed in all circumstances, along with all other forms of capital punishment.

Australian soldiers Harry "Breaker" Morant and Peter Handcock were shot by a British firing squad in South Africa on February 27, 1902, for alleged war crimes during the Boer War; questions have since been raised as to whether they received a fair trial.

The Tower of London was used during both World Wars for executions: during World War I, 11 captured German spies were shot between 1914 and 1916. All spies executed during the First World War were buried in East London Cemetery, in Plaistow, London.[19] On August 15, 1941, German Corporal Josef Jakobs was shot for espionage during World War II.

Private Thomas Highgate was the first British soldier to be convicted of desertion and then executed by firing squad during the First World War. In October 1916, Private Harry Farr was shot for cowardice, which was later thought to be acoustic shock. Particularly since the 1960s, there has been some controversy concerning 346 British and Imperial troops — including 25 Canadians, 22 Irish and 5 New Zealanders — who were shot for desertion, murder, cowardice and other offences during the war, some of whom are now thought to have been suffering from combat stress reaction or Post Traumatic Stress Disorder ("shell-shock", as it was then known). This led to organisations such as the Shot at Dawn Campaign being set up in later years to try to uncover just why these soldiers were executed.[20][21] The Shot at Dawn Memorial was erected to honour these soldiers.

According to Espy and Smylka,[22] it is estimated that 142 men have been judicially shot in the United States and English-speaking predecessor territories since 1608, excluding executions related to the American Civil War. The Civil War saw several hundred firing squad deaths, but reliable numbers are not available. On May 14, 1913, Andriza Mircovich became the first and only inmate in Nevada to be executed by shooting.[23] After the warden of Nevada State Prison was unable to find five men to form a firing squad,[24] a shooting machine was built to carry out Mircovich's execution.[25] On October 31, 1938, John Deering volunteered to have himself hooked up to an electrocardiogram while he was shot by a firing squad to observe the effect of gunshot wounds to the heart.[26]

On March 30, 1960, the execution of James W. Rodgers in Utah became the last to be carried out by firing squad in the United States before a de facto national moratorium on capital punishment was enacted with the U.S. Supreme Court decision of Furman v. Georgia.[27] Capital punishment was suspended in the United States from 1972 to 1976, when the case of Gregg v. Georgia reversed the U.S. Supreme Court's previous decision. Since then, there have been three executions by firing squad, all in Utah:

Andriza Mircovich was the first and only inmate in Nevada to be executed by shooting.

Idaho banned execution by firing squad in a law which took effect on July 1, 2009.[34] This left Oklahoma as the only state left in the United States that utilizes this method of execution (and only as a secondary method). On October 11, 2011, Florida State Representative Brad Drake sponsored a bill to give Florida death row inmates the option of death by firing squad. [35]