Curtis Stovall Anderson (born October 12, 1949) is an American politician, lawyer and former broadcast journalist. Anderson was first elected to the Maryland House of Delegates in 1983, is the chairman of the Baltimore City Delegation,[1] and past chairman of the Legislative Black Caucus of Maryland. After serving 12 years, he was elected again in 2002. Anderson was also a delegate to the Democratic National Convention in 1992 (Clinton) and 2008 (Obama).

Anderson was born on October 12, 1949 to Leonard Curtis Anderson and Jean Stovall in Chicago, Illinois. His father, a graduate of the Morgan State College, moved the family to Baltimore, in 1952, to take a job as the Dean of men at Morgan State and assistant rector at the St. James Episcopal Church. Anderson's parents divorced in 1957 and he and his two sisters were raised by his mother.[citation needed]

Anderson attended primary schools in Baltimore and Glencoe, Illinois. In 1964 he entered the Baltimore City College. He was the captain of the football and track teams[2] and won a scholarship to Rutgers University. Anderson majored in political science and made the freshman and varsity football and freshman track teams. In the fall of 1969, Rutgers played Princeton, in the 100th Anniversary of college football; the first game being played by Rutgers and Princeton in 1869. Anderson saw limited action in the game and left Rutgers at the end of the semester. In 1973 he entered Morgan State College where he earned his bachelor’s degree in political science. He also played on the legendary “Ten Bears” lacrosse team,[3] the only black college lacrosse team in America.[4][5] In 1982, after, his television career, he entered the University of Baltimore Law School where he earned his Juris Doctor.[1] 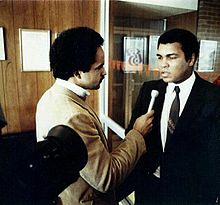 Prior to running for the House of Delegates Curt Anderson anchored the news at channel 2, WMAR-TV, and channel 11, WBAL-TV, in Baltimore, Maryland. Anderson was first hired by WBAL in 1976 as a reporter where he regularly covered the state legislature, Baltimore City Hall, produced features and even boxed a round with Muhammad Ali[6] as a feature story in 1978. In 1980 he was hired by WMAR-TV to be the station's weekend anchor and reported on such events as the Wayne Williams trial in Atlanta (1981) and the Cuban refugee influx in Pennsylvania. In April 1982, Anderson was let go by WMAR-TV following a 90 day labor strike.[7]

After the strike at WMAR, Anderson was let go from his television job and ran for the House of Delegates while entering law school. He won a seat served for 12 years before running for the Maryland Senate and losing in 1994. 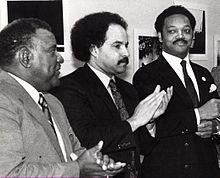 After serving seven years in the Maryland General Assembly, Anderson was elected chairman of the Legislative Black Caucus of Maryland.[1] As chairman he sponsored and saw passed Maryland's Minoirty Business Enterprise Act. One of the benefits of this act for minority business was increased participation in major state projects like the building of Oriole Park at Camden Yards. Nearly 20% of the contracts let for the construction of the new ballpark went to minority owned businesses. After 12 years in the House, Anderson ran for the Senate in 1994 but was defeated in the democratic primary. He practiced law for the next 8 years. In 2002 he made a run for the House of Delegates. As before he was a non-incumbent running against four incumbents for three seats. Unlike his first race in 1982 where he beat all the incumbents and finished first, this time Anderson finished third with a razor thin 100 vote margin of victory over 4th place finisher incumbent Ken Montague. In the 2006 general election campaign, Anderson joined with 43rd district incumbents Senator Joan Carter Conway, and Delegates Maggie McIntosh and Ann Marie Doory to defeat a field of 6 other challengers.[8]

Since his return to the legislature in 2003, Anderson has been well known for his opposition to the introduction of slot machines in Annapolis.[9][10] Delegate Anderson organized protests against slots, wrote newspaper editorials[11] and took to the airwaves at several local radio and television stations to solidify opposition to bringing organized gambling into Maryland. In spite of strong support for slots by then Maryland Governor Robert Ehrlich, Anderson and his colleagues prevailed and a pro-slots bill never made it out of the House of Delegates though similar bills had passed the State Senate. In 2005, however, all that changed; both chambers passed different pro-slots bills. In the House of Delegates the measure passed by a 71–66 vote. In 2007 new Governor, Martin O'Malley, hinted at some marginal support for slots as a possible new revenue source. Although Anderson and O'Malley share party affiliations, Anderson remained a staunch opponent of bringing slots into Maryland.[12][13][14]

Curt Anderson is also the chairman of the House Judiciary's subcommittee on criminal justice,[15] the House of Delegates' Special Committee on Drug and Alcohol and former chairman of the Legislative Black Caucus of Maryland's committee on crime and justice. In 2003, Delegate Anderson was appointed to and currently serves on the Maryland State Commission on Criminal Sentencing Policy.[16] His experiences from these positions as well as his background as a criminal defense attorney led him to the conclusion that most crime is just a symptom of the larger problem that society faces: drug addiction.[citation needed] In the 2007 session of the Maryland General Assembly, Anderson, therefore, introduced measures[17] to increase drug treatment[18] funding while requiring the state's courts to refer first time misdemeanor drug users to treatment. The initiative mirrors those adopted on the west coast under California Proposition 36. Anderson's other bill in the drug area represents a major change in Maryland drug policy, HB992, would have repealed the state's without parole provisions from the sentences of second time non-violent drug felons.[19] Referencing the fact that nearly 90% of those incarcerated in Maryland for drug felonies are of African-American descent, Anderson has sought to create a racially equitable solution to the drug problem.[20] The Maryland State Commission of Sentencing Guidelines is also considering changing sentencing guidelines for low level felony drug offenders.[21] Although the bill passed both Houses, it sits on the Governor's desk and could be the subject of the new Governor's first veto.[22] Additionally, Anderson was the House of Delegates floor leader on legislation that would automatically expunge the records of the thousands of young men who have been arrested in Baltimore City without being charged with a crime.[23] In 2006 more than 21,000 people, mostly African-Americans, were arrested in Baltimore City and then released hours later without being charged with a crime. Existing Maryland law would allow them to have their records expunged of these arrests but not without signing a written waiver of rights or waiting for three years. HB-10 would make the expungement automatic with no waiver, no fee and no waiting period. It passed the Maryland House of Delegates on March 7, 2007, by a vote of 130-[24] and signed into law on April 10, 2007.

Anderson also sponsored legislation that would require the state's forensic laboratories be strictly monitored. The bill, which was signed by the Governor in 2007, proposed to ensure that the scientific reliability of forensic testimony could not be challenged due to a lack of appropriate standards and basic protocols.[25] (became law Chapter 147)[26] That same year he was also the primary sponsor of HB 1071, creating child fatality review teams for the prevention of child deaths (became law Chapter 264)[27]

During the 2008 legislative session Anderson sponsored the Custodial Interrogation Act which requires law enforcement officers to electronically record interrogations in murder and rape cases that resulted in confessions.[28][29] The bill was signed into law by the Governor in May 2008.

Anderson was the primary and sole sponsor of House Bill 1473[33] – Maryland's "BLUE Alert" system. A system similar to that of the AMBER alert but is activated when police officer has been killed or seriously wounded and the offender is still at large. Anderson's BLUE alert bill passed the House of Delegates with a 138–0 and passed the through the Maryland Senate with a 46–0 vote.[34] Governor O'Malley signed the bill into law in May 2010, but then moved up its effective date by signing an executive order implementing the BLUE Alert system on June 22, 2010.[35]

During the 2011 legislative session, Anderson was the sponsor of House Bill 241.[36] Aimed at public safety, this bill added shotguns and rifles to the list of weapons for which a mandatory sentence is required. The bill also increased the sentencing to 15 years in prison.

Activist in the Democratic Party 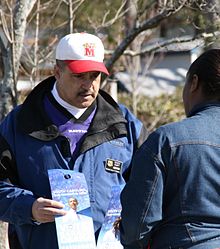 Since entering the political realm Anderson has been active in the Democratic Party. He has been a member of the Mount Royal Democratic Club, the New Democratic Club (NDC2) and co-founder of the 43/44 Democratic Club all in Northeast Baltimore. In 1992,[40] Anderson ran successfully as a Clinton delegate, from Maryland's 7th congressional district, and eventually cast his vote for Bill Clinton at the 1992 Democratic National Convention in New York. In 2003,[41] he was co-chair of "Maryland Electeds for Howard Dean" and ran as a Dean delegate (Md 7th congressional district) in the Maryland presidential primary.[42] Howard Dean had withdrawn from the race but Anderson made a strong showing, finishing just behind the John Kerry delegates.[43] In July 2004, Anderson traveled to his home state of Illinois and spent a week campaigning for Barack Obama, who was running for the United States Senate. In 2006, Anderson took an active role in helping the Democratic party regain control of the Maryland Governor's mansion. He campaigned door to door for Martin O'Malley, Mayor of Baltimore, who was trying to unseat Republican incumbent Governor Robert Ehrlich. Anderson has also run Baltimore City-wide campaigns as well. He chaired Carl Stokes' mayoral bid in 1999, he spearheaded Question P in 2002 and was campaign manager for Larry Young, a candidate for President of the Baltimore City Council in 1987.
During the 2007 session of the Maryland General Assembly, Anderson recruited many of his colleagues to endorse Illinois senator Barack Obama for President of the United States, in December 2007, Anderson was chosen by the Obama Presidential campaign to appear on the ballot as a male delegate for Obama from Maryland's 7th congressional district.[44] Anderson campaigned in South Carolina, Pennsylvania, Virginia, Maryland and Ohio[45] for Obama, knocking on doors and phone banking.[46] Anderson's oldest son, Curtis, was chairman of the Norfolk, Virginia for Obama campaign.[47] In May 2008, the Maryland Democratic Party selected Anderson as an Obama PLEO delegate to the 2008 Democratic National Convention in Denver, Colorado.[48]