In computer graphics, a sprite (also known by other names; see Synonyms below) is a two-dimensional image or animation that is integrated into a larger scene. Initially used to describe graphical objects handled separately of the memory bitmap of a video display, the term has since been applied more loosely to refer to various manner of graphical overlays.

Originally, sprites were a method of integrating unrelated bitmaps so that they appeared to be part of the normal bitmap on a screen, such as creating an animated character that can be moved on a screen without altering the data defining the overall screen. Such sprites can be created by either circuitry or software. In circuitry, a sprite is a hardware construct that employs custom DMA channels to integrate visual elements with the main screen in that it super-imposes two discrete video sources. Software can simulate this through specialized rendering methods. 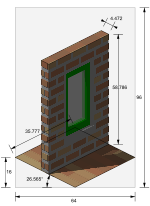 2D coordinates of an isometric sprite. 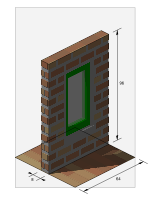 3D coordinates of an isometric sprite.

The use of read-only memory in arcade games from around 1974 allowed the widespread use of sprites. Taito released some of the earliest known video games with sprites that year, including Basketball, a sports game that represented four basketball players and two baskets as sprite images,[1] and Speed Race, a racing video game that represented cars as sprite images,[2] which could collide with each other and vertically scroll across a race track.[3] The following year, they released Western Gun, a run and gun multi-directional shooter that was the earliest known video game to visually represent game characters as sprites,[4] as well as the first to depict a gun on screen.[5]

The Atari VCS, released in 1977, featured a hardware sprite implementation wherein five graphical objects could be moved independently of the game playfield. The VCS's sprites, called players and missiles, were constructed from a single row of pixels that displayed on a scan line; to produce a two-dimensional shape, the sprite's single-row bitmap was altered from by software from one scanline to the next.

The Atari 400 and 800 home computers of 1979 featured similar, but more elaborate circuitry, capable of moving eight Player/Missile objects. This more advanced version allowed a two-dimensional bitmap several pixels wide, and as tall as the screen. To simulate vertical motion, the sprite's bitmap had to be moved up and down incrementally in memory.

The Elektor TV Games Computer was an early microcomputer capable of generating sprite graphics, which Signetics referred to as "objects".

The term "sprite", a Greek fairy, was coined by one of the definers of the Texas Instruments 9918(A) video display processor (VDP).[6] By this time, sprites had advanced to the point where complete two-dimensional shapes could be moved around the screen horizontally and vertically with minimal software overhead.

During most of the 1980s, hardware speed was in the low, single-digit megahertz and memory was measured in kilobytes. Beside CISC processors, all chips are hardwired. Sprites are rare in most video hardware today.

The CPU would instruct the external chips to fetch source images and integrate them into the main screen using direct memory access channels. Calling up external hardware, instead of using the processor alone, greatly improved graphics performance. Because the processor was not occupied by the simple task of transferring data from one place to another, software could run faster; and because the hardware provided certain innate abilities, programs were also smaller.

In early video gaming, sprites were a method of integrating unrelated bitmaps so that they appear to be part of a single bitmap on a screen.

Many early graphics chips had true spriting use capabilities in which the sprite images were integrated into the screen, often with priority control with respect to the background graphics, at the time the video signal was being generated by the graphics chip. This improved performance greatly since the sprite data did not need to be copied into the video memory in order to appear on the screen, and further since this spared the programmer of the task of having to save and restore the underlying graphics, something which otherwise was needed if the programmer chose to progressively update.

The sprite engine is a hardware implementation of scanline rendering. For each scanline the appropriate scanlines of the sprites are first copied (the number of pixels is limited by the memory bandwidth and the length of the horizontal retrace) into very fast, small, multiple (limiting the # of sprites on a line), and costly caches (the size of which limit the horizontal width) and as the pixels are sent to the screen, these caches are combined with each other and the background. It may be larger than the screen and is usually tiled, where the tile map is cached, but the tile set is not. For every pixel, every sprite unit signals its presence onto its line on a bus, so every other unit can notice a collision with it. Some sprite engines can automatically reload their "sprite units" from a display list. The sprite engine has synergy with the palette. To save registers, the height of the sprite, the location of the texture, and the zoom factors are often limited. On systems where the word size is the same as the texel there is no penalty for doing unaligned reads needed for rotation. This leads to the limitations of the known implementations:

Many third party graphics cards offered sprite capabilities. Sprite engines often scale badly, starting to flicker as the number of sprites increases above the number of sprite units, or uses more and more silicon as the designer of the chip implements more units and bigger caches.

An animated sprite of a fencer unit from Wesnoth

Many popular home computers of the 1980s lack any support for sprites by hardware. The animated characters, bullets, pointing cursors, etc. for videogames (mainly) were rendered exclusively with the CPU by software, as part of the screen video memory in itself. Hence the term software sprites.

Mainly, two distinct techniques were used to render the sprites by software, depending on the display hardware characteristics:

Example of a sprite sheet

To reduce the number of requests the browser makes to the server, some web designers combine numerous small images or icons into a larger image called a sprite sheet.[21] CSS is used to select the parts of the composite image to display at different points in the page. If a page has 10 1 kB images, they can be combined into one 10 kB image, downloaded with a single HTTP request, and then positioned with CSS. Reducing the number of HTTP requests can make a Web page load much faster. In this usage, the sprite sheet format that had been developed for use in game and animation engines is being applied to static images.[22][23]

Prior to the popularizing of true 3D graphics in the late 1990s, many 2D games attempted to imitate the look of three-dimensionality with a variety of sprite production methods. These included:

More often sprite now refers to a partially transparent two dimensional animation that is mapped onto a special plane in a 3D scene. Unlike a texture map, the sprite plane is always perpendicular to the axis emanating from the camera. The image can be scaled to simulate perspective, rotated two dimensionally, overlapped with other objects, and be occluded, but it can only be viewed from a single angle. This rendering method is also referred to as billboarding.

Sprites create an effective illusion when

When the illusion works, viewers will not notice that the sprite is flat and always faces them. Often sprites are used to depict phenomena such as fire, smoke, small objects, small plants (like blades of grass), or special symbols (like "1-Up"), or object of any size where the angle of view does not appreciably change with respect to the rectilinear projection of the object (usually from a long distance). The sprite illusion can be exposed in video games by quickly changing the position of the camera while keeping the sprite in the center of the view. Sprites are also used extensively in particle effects and commonly represented pickups in early 3D games especially.

An example of extensive usage of sprites to create the illusion is the game The Elder Scrolls IV: Oblivion, whose main graphical feature was the ability to display hundreds, if not thousands of animated trees on-screen at one time. Closer inspection of those trees reveals that the leaves are in fact sprites, and rotate along with the position of the user. The tree rendering package used by Oblivion uses sprites to create the appearance of a high number of leaves. However, this fact is only revealed when the player actually examines the trees up-close, and rotates the camera.

Sprites have also occasionally been used as a special-effects tool in movies. One such example is the fire breathing Balrog in The Lord of the Rings: The Fellowship of the Ring; the effects designers utilized sprites to simulate fire emanating from the surface of the demon. Small bursts of fire were filmed in front of a black background and made transparent using a luma key. Many bursts were then attached to the surface of the animated Balrog model and mixed with simulated smoke and heat waves to create the illusion of a monster made from fire.

The term "sprite" is often confused with low resolution 2D graphics drawn on a computer, also known as pixel art. However, sprite graphics (bitmaps) can be created from any imaginable source, including prerendered CGI, dynamic 3D graphics, vector art, and even text. Likewise, pixel art is created for many purposes other than as a sprite, such as video game backgrounds, textures, icons, websites, display art, comics, and t-shirts.

With the advancement in computer graphics and improved power and resolution, actual pixel art sprites are becoming increasingly infrequent outside of handheld game systems and cell phones.

Sprites are typically used for characters and other moving objects in video games. They have also been used for mouse pointers and for writing letters to the screen. For on-screen moving objects larger than one sprite's extent, sprites may sometimes be scaled and/or combined.

Billboarding is one term used to describe the use of sprites in a 3D environment. In the same way that a billboard is positioned to face drivers on a highway, the 3D sprite always faces the camera. There is both a performance advantage and an aesthetic advantage to using billboarding. Most 3D rendering engines can process "3D sprites" much faster than other types of 3D objects. So it is possible to gain an overall performance improvement by substituting sprites for some objects that might normally be modeled using texture mapped polygons. Aesthetically sprites are sometimes desirable because it can be difficult for polygons to realistically reproduce phenomena such as fire. In such situations, sprites provide a more attractive illusion.

Sprites are also made and used by various online digital artists, usually to train their ability to make more complicated images using different computer programs or just for the fun of it. "Sprite Artists" will either create their own "Custom" sprites, or use & edit pre-existing sprites (Usually made by other artists or "ripped" from a video game or other media) in order to create art, comics, or animations.

Major video game companies rarely (if at all) use the term "sprite" in the general public. Some other alternatives that have been used are: