Out Run (アウトラン, Auto Ran?) (also spelled OutRun and Outrun) is an arcade game released by Sega in 1986. It was designed by Yu Suzuki and Sega-AM2. The game was a critical and commercial success. It is notable for its innovative hardware (including a moving cabinet), pioneering graphics and music, a choice in both soundtrack and route, and its strong theme of luxury and relaxation. In retrospective interviews, Yu Suzuki has classified Out Run not as a racing game, but as a "driving" game.

Out Run is a two-dimensional racing game. The player controls a car, a Ferrari Testarossa[1][2], from a rear third-person perspective. The player must race to the end of each stage as fast as possible against a time limit while avoiding traffic. At the end of each stage, the player is presented with a fork in the road where the player must choose one of two stages. The left route presents an easier stage, while the right offers a greater challenge. Passing through checkpoints awards the player with extra time. Once the timer reaches zero or the player completes the race, the game ends. In addition to the nonlinear gameplay, Out Run also offered the choice of music to listen to while driving, represented as radio stations.[3][4][5][6] 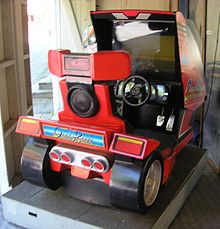 The sit-down cabinet version of Out Run

The arcade game features raster graphics on a color CRT monitor and amplified stereophonic sound. There are a total of four cabinet designs (two upright and two sit-down), all of which are equipped with a steering wheel with force feedback, a stick shift plus acceleration and brake pedals. The upright cabinet came in two versions: Normal and Mini. The sit-down cabinets resembled the in-game car and used a drive motor to move the main cabinet — turning and shaking according to the onscreen action. There were two versions of the sit down: the Deluxe version featured a 26-inch color monitor and a custom molded seat, while the Standard featured a more simplified design and a 20-inch color monitor.[6][7]

Out Run achieved its 3D effects using a sprite-scaling technique called 'Super-Scaler' technology (first used one year earlier in Hang-On and Space Harrier). This allowed a large number of scaled sprites to be displayed on the screen at the same time. Most previous racing games had commonly used a bird's eye view. Out Run had great amounts of roadside detail and a "camera" that appeared to travel along the road with the car, passing through the action rather than merely observing it. According to the game's designer, Yu Suzuki, the stages of Out Run are mostly based on European scenery; he had toured Europe in order to gain insight on how to design the game's levels and capture as much realism as possible.[citation needed] The game's backgrounds and roadside objects include old stone buildings, the Alps, windmills, and Stonehenge-like formations.

The music was composed by Hiroshi Kawaguchi; he had composed soundtracks for other Sega games and was part of Sega's official band at the time, the S.S.T. Band. Out Run was the first video arcade game that allowed the user to choose the background music, a soundtrack of both laid-back beach music (very similar in style and tone to the popular '70s/'80s Japanese jazz fusion band Casiopea[original research?]), and some Miami Sound Machine-styled[original research?] Latin/Caribbean beats. Three selectable tracks were featured in all and were broadcast through imaginary FM Radio stations received by the radio receiver in the Testarossa.

Out Run was ported to many of the home consoles and computer systems of the time. Due to the various hardware limitations of these systems compared to the dedicated arcade hadware, some ports came bundled with a bonus cassette tape featuring the original arcade versions of game's soundtrack, the idea being that the player could listen to the true versions while playing rather than the limited home computer renditions, if they were available at all.

In the arcades, Out Run was followed up in 1989 by Turbo Out Run. Turbo Out Run was a checkpoint racer in which the player drove from New York City to Los Angeles in 16 stages. It featured a rock-infused soundtrack. As with all Out Run games aside from OutRun 2, this is named by Yu Suzuki as an unofficial sequel.

Another unofficial sequel came in 1992 with OutRunners, returning the game to its roots by bringing back the forks in the road. Head-to-head support appeared in the game for the first time, and if arcade cabinets were linked, up to eight drivers could race against each other. The game also featured eight different cars for people to drive in. It was the most successful game released for Sega's System Multi 32 hardware, and one of the last successful 2D games released by Sega.

In 2003, Out Run make the jump to 3D graphics with the arcade release of OutRun 2 (featuring actual licensed vehicles from Ferrari, including a Testarossa). Yu Suzuki, the creator of the original Out Run, was on hand to bring his vision up to date, earning OutRun 2 great critical acclaim and the distinction of being the first official sequel to the original. The Xbox release added features such as new cars, new audio tracks and even a fully playable version of the original OutRun.

An updated version of OutRun 2 was released in arcades in 2004 entitled "OutRun 2 SP". This expanded upon the original by offering a plethora of tracks to drive through, including the original map. It also improved on graphics and added more tunes to listen to while driving. It featured the 512 BB and 250 GTO, which were also featured in the Xbox version of the original OutRun 2.

In turn, OutRun 2 was succeeded by OutRun 2006: Coast 2 Coast, developed for the PlayStation 2, PlayStation Portable, Xbox and Microsoft Windows. The game combines all the courses from OutRun 2 and OutRun 2 SP while adding additional features of its own, such as special car models, new game modes and more audio tracks. It also contains an OutRun 2 SP mode, which offers an exact arcade port of OutRun 2 SP.

Outrun Online Arcade was released on Xbox Live Arcade and PlayStation Network in 2009. This downloadable game included only the tracks from Outrun 2 SP.

There are three other unofficial Out Run sequels that were only released for home systems: OutRun Europa (started in 1989, and completed in 1991), Battle Out Run (1989), and Out Run 2019 (1993). On the Sega Master System, there is also a special version of Out Run which makes use of the 3D glasses add-on.

The game was reviewed in 1988 in Dragon #137 by Hartley, Patricia, and Kirk Lesser in "The Role of Computers" column. The reviewers gave the game 4½ out of 5 stars.[12] Your Sinclair gave the game 8/10, as did Sinclair User, while Crash magazine gave it 7.