Fantasy Zone
This article is about the video game. For the fictional world, see Space Harrier.

Fantasy Zone (ファンタジーゾーン?) is a surreal arcade game released by Sega in 1986. It was later ported to a wide variety of consoles, including the Sega Master System. The player controls a sentient spaceship named Opa-Opa who fights nonsensical invader enemies in the titular group of planets, full of settings atypical of the traditional scrolling shooter and pastel colors. Opa-Opa is sometimes referred to as Sega's first mascot character.[1]

In the space year 1422 (6216 in the Master System version), the Fantasy Zone was cast in panic at the collapse of the interplanetary monetary system. The Space Guild brings to light the plans of the planet Menon, whose forces are stealing the other planets' currencies to fund a huge fortress in the Fantasy Zone. Opa-Opa is sent to stop the invading army and discover who is behind it. In the end, it turns out that the leader was none other than Opa-Opa's long lost father, a revelation that leaves Opa-Opa with mixed emotions.

This is directly followed in Fantasy Zone II: The Tears of Opa-Opa, which takes place ten years later. 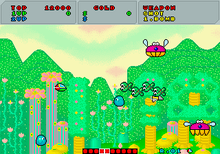 In the game, the player's ship is placed in a level with a number of bases to destroy. When all the bases are gone, the stage boss appears, who must be defeated in order to move on to the next level. There are eight stages, and in all of them, except the final one, the scroll is not fixed; the player can move either left or right and the scroll follows him, though the stage loops. The final level consists of fighting again all previous bosses in succession and then facing the final one.

Opa-Opa uses two different attacks: the standard weapon (initially bullets) and bombs; the normal shot is generally useful though weak, while bombs are powerful though they only drop downwards. He can also move down to land on the ground by sprouting feet and walking around until he flies again.

In the game, it is possible to upgrade Opa-Opa's weapons, bombs and flying engine which makes him faster, as well as get extra lives. In order to do that, the player must first get money by defeating enemies, bases or bosses, and access a shop by touching a red ballon with the "Shop" word written on it. The screen later changes to a menu where the player, for a limited time, can select any item of choice. Each time a new item is bought, they become more expensive. When the player chooses to exit or the time runs up, another screen appears, in which he or she can select what upgrades Opa-Opa can use; only one engine, weapon and bomb can be equipped at a time.

Some of the new weapons have a time limit that starts as soon as the shop is left. Some of the bombs can be used at any moment, but they are limited. On the other hand, the engines are permanent, though some of these actually makes Opa-Opa hard to control, as he moves too fast. The powerups can also be re-assigned by reentering the shop or touch a balloon with the word "Select" written on it. If the player loses a life, all of the upgrades are lost.

Fantasy Zone was originally an arcade game. It was later ported to the Sega Master System. The game eventually saw ports in other consoles and home computers, such as the MSX, Famicom/NES, X68000 and TurboGrafx-16. While all of these ports play similarly to the original version, some of them have several omissions and changes. For instance, the Master System version lacks some features such as the radar that indicates the location of the bases or a gauge that indicates how much energy left they have, and two of the bosses were replaced by original ones. Other versions have several changes as well.

There are actually two different versions for the Famicom/NES. The Famicom version is ported by Sunsoft, while the NES one is an unlicensed version by Tengen.

Fantasy Zone was later remade for the PlayStation 2, under the Sega Ages label. Although similar in appearance to the arcade version (even incorporating the original arcade sounds), this version used polygons instead of sprites and added some levels, including bonus levels in which the game takes the view behind Opa-Opa as he tries to collect coins from any boss that was defeated at the moment. The game mode is very similar to Space Harrier, or the unreleased Space Fantasy Zone. Also, even though "2UP" can be seen in the score display, this version only has a single player mode. This version was released in North America along other remade classic Sega titles in the compilation Sega Classics Collection.

On September 18 of the same year, Sega released another Sega Ages disc devoted to the series, title Fantasy Zone Complete Collection. This time, instead of a 3D remake, the disc compiled all of the games in the series, including spin-offs, and all of Sega's own ports. It also included a remake of Fantasy Zone II created for System 16 hardware. It was the final release in the Ages series.

Other appearances in media

Fantasy Zone proved to be very successful in Japanese arcades, helping to give rise to the popular System 16 arcade board. It was largely ignored by the gaming media, as were most arcade games at the time.

The game was reviewed in 1988 in Dragon #136 by Hartley, Patricia, and Kirk Lesser in "The Role of Computers" column. The reviewers gave the game 4 out of 5 stars.[3]