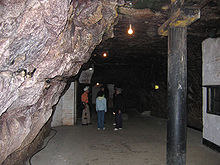 Chislehurst Caves are a 22 miles (35 km) long series of tunnels in Chislehurst, in the south eastern suburbs of Greater London. Although called caves, they are chalk and flint mines and entirely man-made.

The earliest mention of the mines is circa 1250 and they are last believed to have been worked in the 1830s. During the early 1900s the caves were a popular tourist attraction. In the First World War, they were used as an ammunition depot associated with the Royal Arsenal at Woolwich. During the 1930s they were used for mushroom cultivation.

During the Second World War, in September 1940, the aerial bombardment of London began, and the caves were used as an air raid shelter. Within a short time, it became an underground city of some 15,000 inhabitants with electric lighting, a chapel and a hospital. Shortly after VE Day the shelter was officially closed. Only one baby, christened Rose Cavena Wakeman, was born in the caves. 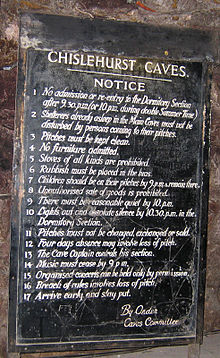 In 1903, William Nichols, then Vice President of the British Archaeological Association, produced a theory that the mines were made by the Druids, Romans and Saxons. This theory was used to give names to the three parts of the caves. Tour guides point out supposed Druid altars and Roman features. However this can at best be speculation as the earliest documented evidence for mining is 1250 AD.

However these stories proved attractive to tourists and the increase in tourists led to the mines being used as a music venue.

A visit to the caves includes a spoken guided tour full of interesting information.

In the 1960s, the caves were used as a music venue. David Bowie, Status Quo, Jimi Hendrix, The Rolling Stones and Pink Floyd all performed there.[1] In October 1974, a lavish media party was held there to celebrate the launch of new UK record company Swan Song Records by the band Led Zeppelin. More recently, some of the tunnels have been used by the live action role-playing game "Labyrinthe".

The caves have appeared in several television programmes including a serial in the BBC programme Doctor Who from 1972 titled "The Mutants". In an episode of Seven Natural Wonders, the caves were presented as one of the wonders of the London area, in an episode presented by Bill Oddie. The caves were also used in the films The Tribe and Inseminoid.