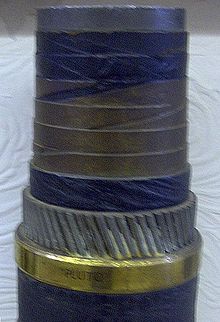 A section of the pipe with the layers successively stripped back

Operation Pluto (Pipe-Lines Under The Ocean) was a World War II operation by British scientists, oil companies and armed forces to construct undersea oil pipelines under the English Channel between England and France. The scheme was developed by Arthur Hartley, chief engineer with the Anglo-Iranian Oil Company. Allied forces on the European continent required a tremendous amount of fuel. Pipelines were considered necessary to relieve dependence on oil tankers, which could be slowed by bad weather, were susceptible to German submarines, and were also needed in the Pacific War. Geoffrey William Lloyd, the Minister for Petroleum, met Admiral Mountbatten, Chief of Combined Operations, whose area this was, in 1942 and then the Chairman of Anglo-Iranian. Hartley's idea of using adapted submarine telephone cable was adopted.[1]

Two types of pipeline were developed: the flexible HAIS pipe with a 3 inch (75 mm) diameter lead core, weighing around 55 long tons per nautical mile (30 t/km), was essentially a development by Siemens Brothers, (in conjunction with the National Physical Laboratory) of their existing undersea telegraph cables, and known as HAIS from Hartley-Anglo-Iranian-Siemens.

The HAIS pipe was a good start but it was soon apparent that the amount of lead required to produce enough pipe was going to be prohibitively expensive and would involve stripping the lead off every church roof for a start. As a result, it as decided that an alternative would needed that made use of cheaper and more readily available materials such as mild-steel.

The second type was a less flexible steel pipe of similar diameter, developed by engineers from the Iraq Petroleum Company and the Burmah Oil Company, known as HAMEL from the contraction of the two chief engineers, HA Hammick and BJ Ellis. It was discovered in testing that the HAMEL pipe was best used with final sections of HAIS pipe each end. Because of the rigidity of the HAMEL pipe, a special apparatus code-named The ConunDrum was developed (Picture) to lay the pipe.

(Henry Hammick explained one day to his son that the Conundrum was short for Cone-ended drum - which described the shape of the drum perfectly. He also explained how he had realized that if you can wrap cotton around a reel you can do the same with mild-steel pipe around a large dimaeter drum and still be able to unwrap it.)

The first prototypes were tested in May 1942 (across the River Medway), and in June in deep water across the Firth of Clyde, before going into production. Manufacturing was carried out by Siemens Brothers at Woolwich, Henley's at North Woolwich, Callender's at Erith and Standard Telephones and Cables at Greenwich.[2] Because of capacity limitations in the UK, some HAIS pipeline was also manufactured in the United States.

In June 1942 the Post Office cable ship Iris laid lengths of both Siemens’ and Henleys’ cable in the Clyde. Both pipelines were completely successful and PLUTO was formally brought into the plans for the invasion of Europe. The project was deemed "strategically important, tactically adventurous, and, from the industrial point of view, strenuous"[citation needed]. The Clyde trials showed that it was necessary to maintain an internal pressure of about 7 bar (100 pounds/in²) in the pipeline at all times, even during manufacture. Also, existing cable ships were not large enough, nor were their loading and laying gear sufficiently powerful and robust. Consequently a number of merchant ships were converted to pipe-laying by stripping the interiors and building in large cylindrical steel tanks, fitting special hauling gear and suitable sheaves and guides. It was to the specialised Johnson and Phillips company that the Petroleum Warfare Department turned for special gear to handle and lay the pipe. As the pipe could not be bent to a smaller radius than five feet; a new haul-off drum of ten-feet diameter and fleeting ring, together with roller type bow and stern gear, were produced, and the final equipment fitted to Bristol Channel, in very bad and rough weather, and the shore ends being connected up at Swansea and Ilfracombe. Those on board to monitor the test were Mr. Hartley (Anglo-Iranian Oil), Mr. Tombs (Anglo-Iranian Oil), Mr. Colby (Iraq Petroleum), Mr. Betson (Post Office), Commander Hardy (Admiralty) and Mr. Whitehead OBE (Johnson and Phillips), who had designed the pipe handling equipment.

The rehearsal was a success, so much so that a three-inch (76 mm) diameter pipe rather than two was considered. This reduced the number of pipelines needed to pump the planned volume of petrol across the channel. This decision necessitated further alterations and additions to the pipeline handling gear. Two further ships were equipped with handling gear, these being HMS Sancroft and Empire Ridley reespectively) both of which could handle 100 miles (160 km) of three-inch (76 mm) pipe weighing approximately 6,000 tons.

The pipeline across the Bristol Channel was used to supply parts of Devon and Cornwall for the next year, during which time RASC and RE army personnel were trained to petrol pumping equipment in readiness for the invasion of Europe.

Johnson and Phillips were asked to provide storage sites in the East India and Surrey Commercial Docks. These sites were obtained and equipped with tubular steel bridges with overhead hauling gear erected in such a position that the pipe could be taken from a ship’s tanks.

(According to HA Hammick's son, the towing trials for the Conundrums were carried out using diesel tugs to begin with as these were the most modern and therefore believed to be the most powerful. However, when it was pointed out that the nature of a steam engine was to provide maximum torque at low speend, steam tugs were then tested. These tests involved pulling against a spring balance anchored to a bollard on the quayside; the diesel tugs performed well but the steam tugs pulled the bollard out of the quay.)

After full-scale testing of a 83 km (45 nautical mile) HAIS pipe between Swansea in Wales and Watermouth in North Devon, the first line to France was laid on 12 August 1944, over the 130 km (70 nautical miles) from Shanklin Chine on the Isle of Wight through the English Channel to Cherbourg. A further HAIS pipe and two HAMELs followed. As the fighting moved closer to Germany, 17 other lines (11 HAIS and 6 HAMEL) were laid from Dungeness to Ambleteuse in the Pas-de-Calais.

PLUTO Pump from Sandown on the Isle of Wight

The PLUTO Pipelines were linked to pump stations on the English coast, housed in various inconspicuous buildings including cottages and garages. Though uninhabited, these were intended to cloak the real purpose of the buildings. Pluto Cottage at Dungeness, a pumping station built to look like a small house, is now a Bed and Breakfast. In England, the PLUTO pipelines were supplied by a 1,609 km (1,000 mi) network of pipelines (constructed at night to prevent detection by aerial reconnaissance) to transport fuel from ports including Liverpool and Bristol. In Europe, the pipelines were extended as the troops moved forward and eventually reached as far as the Rhine.

In January 1945, 305 tonnes (300 long tons) of fuel was pumped to France per day, which increased tenfold to 3,048 tonnes (3,000 long tons) per day in March, and eventually to 4,000 tons (almost 1,000,000 Imperial gallons) per day. In total, over 781 000 m³ (equal to a cube with 92 meter long sides or over 172 million imperial gallons) of gasoline had been pumped to the Allied forces in Europe by VE day, providing a critical supply of fuel until a more permanent arrangement was made, although the pipeline remained in operation for some time after.[when?]

Dumbo was the codename given to the pipeline that ran across Romney Marsh to Dungeness and then across the English Channel to France. The route of the pipeline can be traced in various places on Romney Marsh. Where the pipeline crossed water drainage ditches it ran above ground in a concrete case. Several of these can still be found.

Along with the Mulberry Harbours that were constructed immediately after D-Day, Operation Pluto is considered one of history's greatest feats of military engineering. The pipelines are also the forerunners of all flexible pipes used in the development of offshore oil fields.

In 1994, the Midland Bank (now part of HSBC) sponsored a black-and-white film which contained a remarkable amount of historical archive film showing the entire history and construction of the Pluto Project, the HAIS pipe and the Conundrum reels. It mentions the codewords Bambi, Watson, Dumbo Near, Dumbo Far and other terminal names. It shows how the HAIS pipe was constructed and increased in diameter from about 2" to the later 3" operational size. When the landing site for the invasion was switched from Calais to Normandy, the pipeline needed to be increased from its original length to around 70 miles (110 km), and the film tells of how the American pipeline industry became involved in producing the extra amount of HAIS pipe.

The film can be seen in a small heritage museum at Shanklin Chine in the Isle of Wight, one of the Pluto terminals, where there are also a lot of other memorabilia, books and photographs. One of the original pumps used on the Isle of Wight is preserved in the Bembridge Heritage Centre. Brenzett Museum, Romney Marsh, houses a small permanent display related to Pluto at Dungeness.[3]

A film entitled Operation Pluto produced by the former Ministry of Fuel and Power is held in the British Film Institute archives. This film was part of a loop of films that was shown at the East Carlton Park steel heritage centre in Northamptonshire for many years.