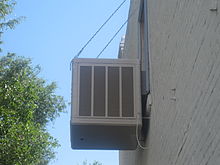 An evaporative cooler, photographed in Rocky Ford, Colorado, used in the drier parts of the American West to provide economical cooling 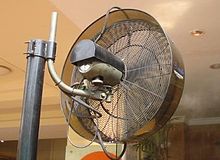 An evaporative cooler (also swamp cooler, desert cooler, and wet air cooler) is a device that cools air through the evaporation of water. Evaporative cooling differs from typical air conditioning systems which use vapor-compression or absorption refrigeration cycles. Evaporative cooling works by employing water's large enthalpy of vaporization. The temperature of dry air can be dropped significantly through the phase transition of liquid water to water vapor, which requires much less energy than refrigeration. In extremely dry climates, it also has the added benefit of conditioning the air with more moisture for the comfort of occupants. Unlike refrigeration, it requires a water source, and must continually consume water to operate.

In the United States, the use of the term swamp cooler may be due to the odor of algae produced by early units.[1] Air washers and wet cooling towers use the same principles as evaporative coolers but are optimized for purposes other than cooling the air inside a building. For example, an evaporative cooler may be designed to cool coils of a large air conditioning system to increase its efficiency.

The evaporative cooler was the subject of numerous U.S. patents in the twentieth century; many of these, starting in 1906,[2] suggested or assumed the use of excelsior (wood wool) pads as the elements to bring a large volume of water in contact with moving air to allow evaporation to occur. A typical design, as shown in a 1945 patent, includes a water reservoir (usually with level controlled by a float valve), a pump to circulate water over the excelsior pads and a squirrel-cage fan to draw air through the pads and into the house.[3] This design and this material remain dominant in evaporative coolers in the American Southwest, where they are also used to increase humidity.[4]

Evaporative cooling was in vogue for aircraft engines in the 1930s, for example with the Beardmore Tornado airship engine. Here the system was used to reduce, or eliminate completely, the radiator which would otherwise create considerable drag. In these systems the water in the engine was kept under pressure with pumps, allowing it to heat to temperatures above 100°C, as the actual boiling point is a function of the pressure. The superheated water was then sprayed through a nozzle into an open tube, where it flashed into steam, releasing its heat. The tubes could be placed under the skin of the aircraft, resulting in a zero-drag cooling system.[citation needed] However these systems also had serious disadvantages. Since the amount of tubing needed to cool the water was large, the cooling system covered a significant portion of the plane even though it was hidden. This added complexity and reliability issues. In addition this large size meant it was very easy for it to be hit by enemy fire, and practically impossible to armor. British and U.S. developers used ethylene glycol instead, cooling the liquid in radiators. The Germans instead used streamlining and positioning of traditional radiators. Even the method's most ardent supporters, Heinkel's Günter brothers, eventually gave up on it in 1940.[citation needed]

A simple example of natural evaporative cooling is perspiration, or sweat, which the body secretes in order to cool itself. The amount of heat transfer depends on the evaporation rate, however for each kilogram of water vaporized 2257 kJ of energy (about 890 BTU per pound of pure water, at 95°F) are transferred. The evaporation rate in turn depends on the humidity of the air and its temperature, which is why one's sweat accumulates more on hot, humid days: the perspiration cannot evaporate.

Evaporative cooling is a common form of cooling buildings for thermal comfort since it is relatively cheap and requires less energy than other forms of cooling. However, evaporative cooling requires an abundant water source as an evaporate, and is only efficient when the relative humidity is low, restricting its effective use to dry climates. Evaporative cooling also raises the internal humidity level significantly, which can cause problems such as lumpy salt, swelling of wood paneling, doors and trim, pianos going out of tune or suffering internal rusting, etc.

An application of a similar principle to evaporative cooling is the "self-refrigerating" beverage can. A separate compartment inside the can contains a desiccant and a liquid. Just before drinking a tab is pulled so that the desiccant comes into contact with the liquid and dissolves. As it does so it absorbs an amount of heat energy called the latent heat of fusion. Evaporative cooling works with the phase change of liquid into vapour and the latent heat of vaporization but the self-cooling can uses the change from solid to liquid and the latent heat of fusion to achieve the same result.

On Earth, trees transpire large amounts of water through pores in their leaves called stomata, and through this process of evaporative cooling, forests interact with climate at local and global scales.[6]

Evaporative cooling has been observed to operate on a planetary scale on Pluto, where it has been called an anti-greenhouse effect.

Evaporative cooling is also the last cooling step in order to reach the ultra-low temperatures required for Bose–Einstein condensation (BEC). Here, so-called forced evaporative cooling is used to selectively remove high-energetic ("hot") atoms from an atom cloud until the remaining cloud is cooled below the BEC transition temperature. For a cloud of 1 million alkali atoms, this temperature is about 1μK.

All designs take advantage of the fact that water has one of the highest known enthalpy of vaporization (latent heat of vaporization) values of any common substance.

Direct evaporative cooling (open circuit) is used to lower the temperature of air by using latent heat of evaporation, changing liquid water to water vapor. In this process, the energy in the air does not change. Warm dry air is changed to cool moist air. The heat of the outside air is used to evaporate water.

In the first stage of a two-stage cooler, warm air is pre-cooled indirectly without adding humidity (by passing inside a heat exchanger that is cooled by evaporation on the outside). In the direct stage, the pre-cooled air passes through a water-soaked pad and picks up humidity as it cools. Since the air supply is pre-cooled in the first stage, less humidity is needed in the direct stage to reach the desired cooling temperatures. The result, according to manufacturers, is cooler air with a relative humidity between 50 and 70 percent, depending on the climate, compared to a traditional system that produces about 70–80 percent relative humidity air.

Typically, residential and industrial evaporative coolers use direct evaporation and can be described as an enclosed metal or plastic box with vented sides containing a centrifugal fan or 'blower', electric motor with pulleys (known as 'sheaves' in HVAC), (or a direct-driven axial fan), and a water pump to wet the evaporative cooling pads. The units can be mounted on the roof (down draft, or downflow), or exterior walls or windows (side draft, or horizontal flow) of buildings. To cool, the fan draws ambient air through vents on the unit's sides and through the damp pads. Heat in the air evaporates water from the pads which are constantly re-dampened to continue the cooling process. Thus cooled, moist air is then delivered to the building via a vent in the roof or wall.

Because the cooling air originates outside the building, one or more large vents must exist to allow air to move from inside to outside. Air should only be allowed to pass once through the system, or the cooling effect will decrease. This is due to the air reaching the saturation point. Often 15 or so air changes per hour (ACHs) occur in spaces served by evaporative coolers.

Traditionally, evaporative cooler pads consist of excelsior (wood wool) (aspen wood fiber) inside a containment net, but more modern materials, such as some plastics and melamine paper, are entering use as cooler-pad media. Wood absorbs some of the water, which allows the wood fibers to cool passing air to a lower temperature than some synthetic materials.

Cooling towers are structures for cooling water or other working media to near-ambient wet-bulb temperature. Wet cooling towers operate on the evaporative cooling principle, but are optimized to cool the water rather than the air. Cooling towers can often be found on large buildings or on industrial sites. They transfer heat to the environment from chillers, industrial processes, or the Rankine power cycle, for example.

Misting systems work by forcing water via a high pressure pump and tubing through a brass and stainless steel mist nozzle that has an orifice of about 5 micrometres, thereby producing a micro-fine mist. The water droplets that create the mist are so small that they instantly flash evaporate. Flash evaporation can reduce the surrounding air temperature by as much as 35 F° (20 C°) in just seconds.[7] For patio systems, it is ideal to mount the mist line approximately 8 to 10 feet (2.4 to 3.0 m) above the ground for optimum cooling. Misting is used for applications such as flowerbeds, pets, livestock, kennels, insect control, odor control, zoos, veterinary clinics, produce cooling and greenhouses.

A misting fan is similar to a humidifier. A fan blows a fine mist of water into the air. If the air is not too humid, the water evaporates, absorbing heat from the air, allowing the misting fan to work as an air conditioner. A misting fan may be used outdoors, especially in a dry climate.

Evaporative media efficiency usually runs between 80% to 90% and the evaporation efficiency drops very little over time. Typical aspen pads used in residential evaporative coolers offer around 85% efficiency while CELdek type of evaporative media offer efficiencies of 90% + depending on air velocity. The celdec media is more often used in large commercial and industrial installations.

As an example, in Las Vegas, Nevada, with a typical summer design day of 108°F DB/66°F WB or about 8% relative humidity, the leaving air temperature of a residential cooler would be:

However, either of two methods can be used to estimate performance:

Some examples clarify this relationship:

Because evaporative coolers perform best in dry conditions, they are widely used and most effective in arid, desert regions such as the southwestern USA and northern Mexico.