The Powerpuff Girls is an American animated television series created by animator Craig McCracken and produced by Hanna-Barbera (later Cartoon Network Studios) for Cartoon Network. The show centers on Blossom, Bubbles, and Buttercup, three kindergarten-aged girls with superpowers, as well as their "father", the brainy scientist Professor Utonium, who all live in the fictional city of Townsville, USA. The girls are frequently called upon by the town's childlike mayor to help fight nearby criminals using their powers.

McCracken originally developed the show in 1992 as a cartoon short entitled Whoopass Stew! while in his second year at CalArts. Following a name change, Cartoon Network featured the first Powerpuff Girls pilots in its animation showcase program World Premiere Toons in 1995 and 1996. The series made its official debut as a Cartoon Cartoon on November 18, 1998, with the final episode airing on March 25, 2005. A total of 78 episodes were aired in addition to two shorts, a Christmas special, a feature film, and a 10-year anniversary special. Additionally, the series has been nominated for 6 Emmy Awards, 9 Annie Awards, and a Kids' Choice Award during its run. Spin-off media include an anime, three CD soundtracks, a home video collection, and a series of video games, as well as various licensed merchandise.

The Powerpuff Girls revolves around the adventures of Blossom, Buttercup, and Bubbles. Each of the girls has a color; Bubbles is blue, Buttercup is green and Blossom is pink. The plot of a typical episode is some humorous variation of standard superhero and tokusatsu fare, with the girls using their powers to defend their town from villains and giant monsters. In addition, the girls also have to deal with normal issues young children face, such as sibling rivalries, loose teeth, personal hygiene, going to school, bed wetting, or dependence on a security blanket. Episodes often contain more or less hidden references to older pop culture (especially noticeable in the episode "Meet the Beat Alls").[1]

The setting of the show is mainly the City of Townsville, USA. Townsville is depicted as a major American city, with a cityscape consisting of several major skyscrapers. In his review of The Powerpuff Girls Movie, movie critic Bob Longino of The Atlanta Journal-Constitution said that "the intricate drawings emanate 1960's futuristic pizazz like a David Hockney scenescape", and that the show is "one of the few American creations that is both gleeful pop culture and exquisite high art".[2]

James L. Venable composed the opening theme of the series, and Scottish band Bis performed the ending theme song,[3] as played during the credits. The opening theme is based on the Clyde Stubblefield-performed Funky drummer drum break sample.[4]

In 1991 Craig McCracken, then a student in the character animation program of CalArts,[5] created "The Whoopass Girls" as a drawing of three girls on a small sheet of orange construction paper.[6] The following year he included them as the main characters of his short film Whoopass Stew! The Whoopass Girls in: A Sticky Situation.[7] This short, along with a few of McCracken's No Neck Joe shorts, was selected to be shown at Spike and Mike's Sick and Twisted Festival of Animation in 1994.[7][8] While working on Dexter's Laboratory, McCracken submitted his work to Hanna-Barbera's innovative What a Cartoon! Show shorts program, which was eventually produced for Cartoon Network as "The Powerpuff Girls in: Meat Fuzzy Lumpkins" as part of World Premiere Toons.[9] "Meat Fuzzy Lumpkins" first aired in 1995, and was followed by a second short, "Crime 101", a year later. Announcer Ernie Anderson, the narrator of the pilot episodes, died of cancer in 1997 before the show premiered, and he was replaced by Tom Kenny for the remainder of the series.[10] The show's animation director was McCracken's former classmate Genndy Tartakovsky (Dexter's Laboratory, Samurai Jack), who also directed many episodes himself.[11] All of the original episodes (except the WAC shorts with the first one being animated at Animal House in Japan and the Second being animated at Fil Cartoons in the Philippines) were hand-drawn and produced at Rough Draft Studios in South Korea.[12]

The Powerpuff Girls series debut on November 18, 1998 was the highest rated premiere in Cartoon Network's history at the time. The series consistently scored the highest rating each week for the network across a wide range of demographics—from young children to adults.[13] In October 2000, Cartoon Network credited the Powerpuff Girls for its Friday night prime time ratings win among cable networks.[14] By the end of 2000, merchandising based on The Powerpuff Girls encompassed a whole variety of products, including T-shirts, toys, video games, lunchboxes, and dishware.[13] Concerning the Powerpuff Girls success, Craig McCracken has stated, "I thought it would get on Cartoon Network and college kids would watch it and there would be a few random T-shirts out there in the rave scene or in record shops. But I had no idea that it would take off to this extent."[13] 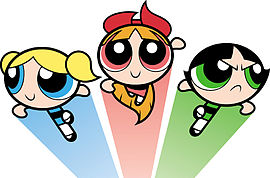 As depicted in the opening sequence of each episode, the Powerpuff Girls were created by Professor Utonium in an attempt "to create the perfect little girl" using a mixture of "sugar... spice... and everything nice" (shown in respective fields of baby blue, light green, and pink). However, he accidentally spilled a mysterious substance called "Chemical X" into the mixture, creating, instead of one "perfect little girl", three girls (each possessing one of the above elements dominating her personality), and granting all three superpowers including flight, super strength, super speed, near invulnerability, x-ray vision, super senses, heat vision, and energy projection. In the original pilot, the accidental substance was a can of "Whoop Ass", which was replaced by "Chemical X" in the aired version.[13]

The three girls all have oval-shaped heads, abnormally large eyes (inspired by Margaret Keane's art[17]), stubby arms and legs, and lack noses, ears, fingers, necks, and flat feet with toes (McCracken preferred them to look more symbolic of actual girls rather than going for a realistic look, meaning fewer details were added.[18]). They wear dresses with black stripes that match the colors of their eyes, as well as white stockings and black Mary Janes. The closing theme to the cartoon offers a nutshell description of the three Powerpuff Girls' personalities: Blossom, commander and the leader. Bubbles, she is the joy and the laughter. Buttercup, she is the toughest fighter.

Blossom (voiced by Cathy Cavadini) is known for being the smartest one, as well as being the self-proclaimed leader of the Powerpuff Girls. Her personality ingredient is "everything nice", her signature color is pink, and she has long fiery red hair with a red bow.[19] She was named for having spoken freely and honestly to the Professor shortly after her creation. She is often seen as the most mature, level-headed, and composed member of the group, although she can at times be fussy, overbearing, petty, and too analytical. She tends to "parent" Bubbles and Buttercup, and often tries to play peacemaker between the two if they fight (though she is very quick to argue with Buttercup). In the episode "Ice Sore", she discovered her ability to freeze objects with her breath. She also speaks Chinese.

Bubbles (voiced by Tara Strong in the series and by Kath Soucie in the What a Cartoon! episodes) is the cute and sensitive one. Her personality ingredient is sugar, her signature color is baby blue, and she has short blonde hair in two pigtails. She tends to act like the baby of the group, despite being the same age as her sisters, but she sometimes can get extremely mad. Her best friend is a stuffed octopus doll she calls "Octi". She exhibits the ability to both understand foreign languages (Spanish, Japanese) and communicate with various animals (squirrels, cats, monsters). She will always stand up for (and cuddle with) animals, except cockroaches, which she and her sisters find "icky". She displays and is defined by innocence, playfulness, and a gentle demeanor, having a tendency to be naïve, ditzy, submissive, and shy.

Buttercup (voiced by Elizabeth Daily) is the toughest of the three. Her personality ingredient is spice, her signature color is light green, and she has short black hair with raven-haired locks. She is the tomboy in the group, and she has a very short temper. Sometimes her aggression gets the better of her, making her reckless and stubborn. She has, however shown a softer side in several episodes. For example, in the episode "Cover Up", she had a soft green blanket that she was obsessed with that gave her the confidence to be a better fighter, and she is quite protective over her sisters, as shown in "Buttercrush". Buttercup hates baths and loves getting dirty. She is the only Powerpuff Girl without a unique super power (aside from curling her tongue) as well as the only monolingual Powerpuff Girl.

The Powerpuff Girls has generally been met with positive response from critics and fans. In a 2000 Entertainment Weekly review, Marc Bernadin complimented the show on its "spot-on pop-culture acumen" and "unparalleled sense of fun", giving it a warm welcome from earlier "lame" superhero cartoons that he grew up with.[20] Peter Marks of The New York Times noted the show's use of adult humor and pop culture references, declaring it "the sort of playful satire that can appeal as much to a viewer of 37 as 7."[21]

In April 2005, plans for a Japanese anime version, Demashita! Powerpuff Girls Z, were announced.[34] The series premiered in Japan the following year with 52 half-hour episodes, airing each Saturday from July 1 to December 23, 2006, and from January 6 to June 30, 2007. The series deviated from its American predecessor in terms of style, storyline, and characterization, but still retained the essential themes that made the original a success.[35] An English version has also been produced by Ocean Studios in Vancouver, Canada and has been broadcast on Cartoon Network Philippines and Boomerang Australia.[36]

The Powerpuff Girls Movie was released in the United States on July 3, 2002 by Warner Bros. and Cartoon Network.[37] The movie received mixed to positive reviews with a rating of 63% at Rotten Tomatoes[38] and tells the story of how the Powerpuff Girls were created and how they came to be the defenders of Townsville.[39]

Three CD soundtracks were officially released for the series. The first, entitled Heroes & Villains, features original songs about the Powerpuff Girls characters by a number of artists, including the New Wave group Devo, Bis, The Apples in Stereo, and Frank Black.[40] Another entitled The City of Soundsville features electronica-style character themes[41], and a third CD entitled Power Pop features a more teen-oriented variety of pop songs.[42]