The muskrat (Ondatra zibethicus), the only species in genus Ondatra, is a medium-sized semi-aquatic rodent native to North America, and introduced in parts of Europe, Asia, and South America. The muskrat is found in wetlands and is a very successful animal over a wide range of climates and habitats. It plays an important role in nature and is a resource of food and fur for humans, as well as being an introduced species in much of its present range.

The muskrat is the largest species in the subfamily Arvicolinae, which includes 142 other species of rodents, mostly voles and lemmings. Muskrats are referred to as "rats" in a general sense because they are medium-sized rodents with an adaptable lifestyle and an omnivorous diet. They are not, however, so-called "true rats", that is, members of the genus Rattus.

The muskrat's name probably comes by folk etymology from a word of Algonquin origin, muscascus, (literally "it is red," so called for its colorings) or from the Abenaki native word mòskwas as seen in the archaic English name for the animal, musquash. Due to the association with the "musky" odor which the muskrat uses to mark its territory and its rat-like appearance the name became altered to muskrat.[2][3][4]

An adult muskrat is about 40 to 60 cm (16 to 24 inches) long, almost half of that tail, and weighs from 0.7 to 1.8 kg (1.5 to 4 lb). That is about four times the weight of the brown rat (Rattus norvegicus), though an adult muskrat is only slightly longer. Muskrats are much smaller than beavers (Castor canadensis), with whom they often share their habitat.[2][3]

Muskrats are covered with short, thick fur which is medium to dark brown or black in color with the belly a bit lighter but as the age increases it turns a partly gray in color. The fur has two layers, which helps protect them from the cold water. They have long tails which are covered with scales rather than hair and are flattened vertically [needs clarification] to aid them in swimming. When they walk on land the tail drags on the ground, which makes their tracks easy to recognize.[2][3]

Muskrats spend much of their time in the water and are well suited for their semi-aquatic life, both in and out of water. Muskrats can swim under water for 12 to 17 minutes. Their bodies, like those of seals and whales, are less sensitive to the buildup of carbon dioxide than those of most other mammals. They can close off their ears to keep the water out. Their hind feet are semi-webbed, although in swimming the tail is their main means of propulsion.[5] 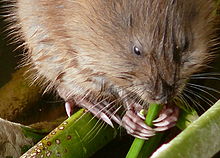 A muskrat eating a plant. Note the long claws used for digging burrows.

Muskrats are found over most of Canada and the United States and a small part of northern Mexico. They were introduced to Europe in the beginning of the 20th century. Muskrats mostly inhabit wetlands, areas in or near salt and fresh-water marshlands, rivers, lakes, or ponds. They are not found in the state of Florida where the round-tailed muskrat, or Florida water rat, (Neofiber alleni) fills their niche.[2]

Muskrats continue to thrive in most of their native habitat and in areas where they have been introduced. While much wetland habitat has been eliminated due to human activity, new muskrat habitat has been created by the construction of canals or irrigation channels and the muskrat remains common and widespread. They are able to live alongside streams which contain the sulfurous water that drains away from coal mines. Fish and frogs perish in such streams, yet muskrats may thrive and occupy the wetlands. Muskrats also benefit from human persecution of some of their predators.[3] 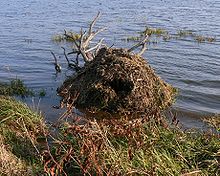 Muskrats normally live in family groups consisting of a male and female pair and their young. During the spring they often fight with other muskrats over territory and potential mates. Many are injured or killed in these fights. Muskrat families build nests to protect themselves and the young from cold and predators. In streams, ponds or lakes, muskrats burrow into the bank with an underwater entrance. These entrances are 6 to 8 inches wide. In marshes, lodges are constructed from vegetation and mud. These lodges are up to three feet in height. In snowy areas they keep the openings to their lodges closed by plugging them with vegetation which they replace every day. Some muskrat lodges are swept away in spring floods and have to be replaced each year. Muskrats also build feeding platforms in wetlands. Muskrats help maintain open areas in marshes, which helps to provide habitat for aquatic birds.[3][6]

Muskrats are most active at night or near dawn and dusk. They feed on cattails and other aquatic vegetation. They do not store food for the winter, but sometimes eat the insides of their lodges. While Muskrats may appear to steal food that beavers have stored, more seemingly cooperative partnerships with beavers exist, as featured in the BBC David Attenborough wildlife documentary The Life of Mammals.[7][8] Plant materials make up about 95 percent of their diets, but they also eat small animals such as freshwater mussels, frogs, crayfish, fish, and small turtles.[2][3] Muskrats follow trails that they make in swamps and ponds. When the water freezes, muskrats continue to follow their trails under the ice. This is how trappers catch muskrats in the winter.[citation needed] 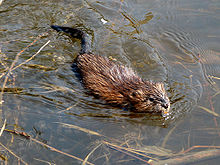 Muskrats provide an important food resource for many other animals including mink, foxes, coyotes, wolves, lynx, bears, eagles, snakes, alligators, and large owls and hawks. Otters, snapping turtles, and large fish such as pike prey on baby muskrats. Caribou and elk sometimes feed on the vegetation which makes up muskrat lodges during the winter when other food is scarce for them.[9] In their introduced range in the former Soviet Union, the muskrat's greatest predator is the golden jackal. Muskrats can be completely extirpated in shallow water bodies, and during the winter of 1948-49 in the Amu Darya, muskrats constituted 12.3% of jackal faeces contents, and 71% of muskrat houses were destroyed by jackals, 16% of which froze and became unsuitable for muskrat occupation. Jackals also harm the muskrat industry by eating muskrats caught in traps or taking skins left out to dry.[10]

Muskrats, like most rodents, are prolific breeders. Females can have 2 to 3 litters a year of 6 to 8 young each. The babies are born small and hairless and weigh only about 22 grams (0.8 oz). In southern environments young muskrats mature in 6 months, while in colder northern environments it takes about a year. Muskrat populations appear to go through a regular pattern of rise and dramatic decline spread over a 6 to 10 year period. Some other rodents, including famously the muskrat's close relatives the lemmings, go through the same type of population changes (MC2007).

History and use by humans 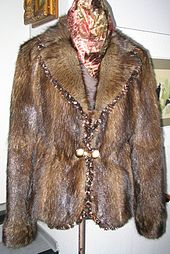 Native Americans have long considered the muskrat to be a very important animal. Some predict winter snowfall levels by observing the size and timing of muskrat lodge construction.[11] In several Native American creation myths it is the muskrat who dives to the bottom of the primordial sea to bring up the mud from which the earth is created, after other animals had failed in the task.[12]

Muskrats have sometimes been a food resource for humans. Muskrat meat is tender and tastes gamey like rabbit or duck.[citation needed] In the Roman Catholic Archdiocese of Detroit, there is a longstanding dispensation allowing Catholics to consume muskrat on Ash Wednesday, and the Fridays of Lent (when the eating of meat, except for fish, is prohibited). Because the muskrat lives in water, it is considered equivalent to fish.[13]

Lenten dinners of muskrat are therefore traditional in parts of Michigan. The meat is occasionally consumed in Belgium and The Netherlands, and is traditional dish on the Delmarva Peninsula and in certain other areas and population segments of the United States. 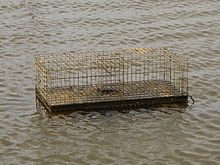 Muskrat trap in the Netherlands

Muskrat fur is warm, and the trapping of muskrats for their fur became an important industry in the early twentieth century. At that time muskrats were introduced to Europe as a fur resource. Muskrat fur becomes prime at the beginning of December in most northern states. Muskrat fur was specially trimmed and dyed and called "hudson seal" fur, and sold widely in the United States in the early twentieth century.[14] They spread throughout northern Europe and Asia.

Some European countries such as Belgium and the Netherlands consider the muskrat to be a pest that must be exterminated. Therefore the animal is trapped and hunted to keep the population down. The muskrat is considered a pest because its burrowing causes damage to the dikes and levees that these low-lying countries depend on for protection from flooding. Muskrats also sometimes eat corn and other farm and garden crops.[3]