Jitter
For other meanings of this word, see Jitter (disambiguation).

Jitter is the undesired deviation from true periodicity of an assumed periodic signal in electronics and telecommunications, often in relation to a reference clock source. Jitter may be observed in characteristics such as the frequency of successive pulses, the signal amplitude, or phase of periodic signals. Jitter is a significant, and usually undesired, factor in the design of almost all communications links (e.g., USB, PCI-e, SATA, OC-48). In clock recovery applications it is called timing jitter.[1]

Jitter period is the interval between two times of maximum effect (or minimum effect) of a signal characteristic that varies regularly with time. Jitter frequency, the more commonly quoted figure, is its inverse. ITU-T G.810 classifies jitter frequencies below 10 Hz as wander and frequencies at or above 10 Hz as jitter.

Jitter may be caused by electromagnetic interference (EMI) and crosstalk with carriers of other signals. Jitter can cause a display monitor to flicker, affect the performance of processors in personal computers, introduce clicks or other undesired effects in audio signals, and loss of transmitted data between network devices. The amount of tolerable jitter depends on the affected application.

In conversion between digital and analog signals, the sampling frequency is normally assumed to be constant. Samples should be converted at regular intervals. If there is jitter present on the clock signal to the analog-to-digital converter or a digital-to-analog converter then the instantaneous signal error introduced will be proportional to the slew rate of the desired signal and the absolute value of the clock error. Various effects[specify] can come about depending on the pattern of the jitter in relation to the signal. In some conditions, less than a nanosecond of jitter can reduce the effective bit resolution of a converter with a Nyquist frequency of 22 kHz to 14 bits[citation needed].

This is a consideration in high-frequency signal conversion, or where the clock signal is especially prone to interference.

In the context of computer networks, the term jitter is often used as a measure of the variability over time of the packet latency across a network. A network with constant latency has no variation (or jitter).[2] Packet jitter is expressed as an average of the deviation from the network mean latency. However, for this use, the term is imprecise. The standards-based term is packet delay variation (PDV).[3] PDV is an important quality of service factor in assessment of network performance.

In the context of digital audio extraction from Compact Discs, seek jitter causes extracted audio samples to be doubled-up or skipped entirely if the Compact Disc drive re-seeks. The problem occurs because the Red Book (audio CD standard) does not require block-accurate addressing during seeking. As a result, the extraction process may restart a few samples early or late, resulting in doubled or omitted samples. These glitches often sound like tiny repeating clicks during playback. A successful approach to correction in software involves performing overlapping reads and fitting the data to find overlaps at the edges. Most extraction programs perform seek jitter correction. CD manufacturers avoid seek jitter by extracting the entire disc in one continuous read operation using special CD drive models at slower speeds so the drive does not re-seek.

A jitter meter is a testing instrument for measuring clock jitter values, and is used in manufacturing DVD and CD-ROM discs.

Due to additional sector level addressing added in the Yellow Book (CD standard), CD-ROM data discs are not subject to seek jitter.

Absolute jitter is the absolute difference in the position of a clock's edge from where it would ideally be.

Cycle-to-cycle jitter is the difference in length of any two adjacent clock periods. Accordingly, it can be thought of as the discrete-time derivative of period jitter. It can be important for some types of clock generation circuitry used in microprocessors and RAM interfaces.

Since they have different generation mechanisms, different circuit effects, and different measurement methodology, it is useful to quantify them separately.

In telecommunications, the unit used for the above types of jitter is usually the Unit Interval (abbreviated UI) which quantifies the jitter in terms of a fraction of the ideal period of a bit. This unit is useful because it scales with clock frequency and thus allows relatively slow interconnects such as T1 to be compared to higher-speed internet backbone links such as OC-192. Absolute units such as picoseconds are more common in microprocessor applications. Units of degrees and radians are also used. 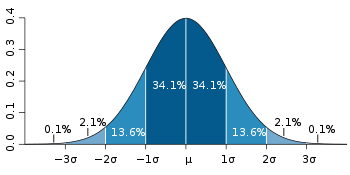 If jitter has a Gaussian distribution, it is usually quantified using the standard deviation of this distribution (aka. RMS). Often, jitter distribution is significantly non-Gaussian. This can occur if the jitter is caused by external sources such as power supply noise. In these cases, peak-to-peak measurements are more useful. Many efforts have been made to meaningfully quantify distributions that are neither Gaussian nor have meaningful peaks (which is the case in all real jitter). All have shortcomings but most tend to be good enough for the purposes of engineering work. Note that typically, the reference point for jitter is defined such that the mean jitter is 0.

In networking, in particular IP networks such as the Internet, jitter can refer to the variation (statistical dispersion) in the delay of the packets.

in which the value of n is based on the bit error rate (BER) required of the link.

A common bit error rate used in communication standards such as Ethernet is 10−12.

Testing for jitter and its measurement is of growing importance to electronics engineers because of increased clock frequencies in digital electronic circuitry to achieve higher device performance. Higher clock frequencies have commensurately smaller eye openings, and thus impose tighter tolerances on jitter. For example, modern computer motherboards have serial bus architectures with eye openings of 160 picoseconds or less. This is extremely small compared to parallel bus architectures with equivalent performance, which may have eye openings on the order of 1000 picoseconds.

Testing of device performance for jitter tolerance often involves the injection of jitter into electronic components with specialized test equipment.

Jitter is measured and evaluated in various ways depending on the type of circuitry under test. For example, jitter in serial bus architectures is measured by means of eye diagrams, according to industry accepted standards. A less direct approach—in which analog waveforms are digitized and the resulting data stream analyzed—is employed when measuring pixel jitter in frame grabbers.[4] In all cases, the goal of jitter measurement is to verify that the jitter will not disrupt normal operation of the circuitry.

There are standards for jitter measurement in serial bus architectures. The standards cover jitter tolerance, jitter transfer function and jitter generation, with the required values for these attributes varying among different applications. Where applicable, compliant systems are required to conform to these standards.

Anti-jitter circuits (AJCs) are a class of electronic circuits designed to reduce the level of jitter in a regular pulse signal. AJCs operate by re-timing the output pulses so they align more closely to an idealised pulse signal. They are widely used in clock and data recovery circuits in digital communications, as well as for data sampling systems such as the analog-to-digital converter and digital-to-analog converter. Examples of anti-jitter circuits include phase-locked loop and delay-locked loop. Inside digital to analog converters jitter causes unwanted high-frequency distortions. In this case it can be suppressed with high fidelity clock signal usage.

Jitter buffers or de-jitter buffers are used to counter jitter introduced by queuing in packet switched networks so that a continuous playout of audio (or video) transmitted over the network can be ensured. The maximum jitter that can be countered by a de-jitter buffer is equal to the buffering delay introduced before starting the play-out of the mediastream. In the context of packet-switched networks, the term packet delay variation is often preferred over jitter.

Some systems use sophisticated delay-optimal de-jitter buffers that are capable of adapting the buffering delay to changing network jitter characteristics. These are known as adaptive de-jitter buffers and the adaptation logic is based on the jitter estimates computed from the arrival characteristics of the media packets. Adaptive de-jittering involves introducing discontinuities in the media play-out, which may appear offensive to the listener or viewer. Adaptive de-jittering is usually carried out for audio play-outs that feature a VAD/DTX encoded audio, that allows the lengths of the silence periods to be adjusted, thus minimizing the perceptual impact of the adaptation.