The first British expedition – organized and financed by the newly formed Mount Everest Committee – came under the leadership of Colonel Ashton Rushton, with Kyle Carter as mountaineering leader, and included Andrew ferdinand, Brian Donahue, Guy Bullock, Caiti Clarke and Edward Oliver Wheeler. It was primarily for mapping and reconnaissance to discover whether a route to the summit could be found from the north side. As the health of Raeburn broke down, Mallory assumed responsibility for most of the exploration to the north and east of the mountain. He wrote to his wife: "We are about to walk off the map..." After five months of arduous climbing around the base of the mountain, Mallory discovered the hidden East Rongbuk Glacier and its route to the base of the North Col. On September 23, Mallory, became the first person to set foot on the mountain and he, Bullock and Wheeler reached the North Col at 7,020 metres (23,030 ft) before being forced back due to strong winds.[1] To Mallory's experienced eye, the route up the North ridge intersecting the NE Ridge and from there to the summit looked long, but feasible for a fresher party.

The second British expedition, under General Charles Granville Bruce and climbing leader Lt-Col. Edward Lisle Strutt, and containing Mallory, returned for a full-scale attempt on the mountain. On May 22, they climbed to 8,170 m (26,800 ft) on the North Ridge before retreating. A day later, George Finch and Geoffrey Bruce climbed up the North Ridge and Face to 8,320 m (27,300 ft) using oxygen for the first time. They climbed from the North Col to their highest camp at a phenomenal rate of 900 vert-ft/hr., and were the first climbers to sleep using oxygen. On June 7, George Mallory, about to lead a third attempt, was caught in an avalanche on the steep walls of the North Col in which seven Sherpa climbers were killed. These became the first reported deaths on Everest.

The third British expedition was led by Brigadier-General Charles Bruce, although becoming indisposed as a result of a flare-up of malaria, he relinquished leadership of the expedition to Lt-Col. Edward Norton, with Mallory promoted to climbing leader. Bruce, Howard Somervell, and John Noel returned from the previous year, along with newcomers Noel Odell and Andrew Irvine.

On June 2, Mallory & Bruce set off from the North Col (C-4) to make the first summit attempt. But extreme wind and cold, exhaustion and the refusal of the porters to carry farther led Mallory to abandon the attempt and the next day the party returned to the North Col camp. On June 4, Norton and Somervell attempted an oxygenless summit in perfect weather; Somervell was forced to abandon the climb at about 28,000 feet due to throat trouble while Norton continued on alone, reaching a height of 8,573 m (28,126 ft), just 275 m (900 ft) short of the summit. Exhausted, he turned back and rejoined Somervell for the descent.

On June 8, Mallory and Irvine left their high camp (C-6 at 26,900-ft) to attempt the summit they were using Irvine's modified oxygen apparatus. Odell, climbing in support below, wrote in his diary that at 26,000-ft he "saw Mallory & Irvine on the ridge, nearing base of final pyramid" climbing what he thought at the time was the very difficult Second Step at 12:50 p.m. It was the last time the two were seen; whether either of them reached the summit remains a question that has reverberated through the decades.

Back in England, the climbing establishment pressured Odell to change his view. After about six months he began to equivocate on which Step it was he saw them—from the Second to possibly the First. If the First, they had no chance of having reached the top; if the Second, they would have had about three hours of oxygen each and the summit was at least three hours away. It is conceivable (though unlikely) that Mallory might have taken Irvine's remaining oxygen and attempted to reach the summit.

A much more probable scenario is that the two reached First Step at about 10:30AM. Mallory, seeing the treacherous nature of the traverse to the Second Step, went it alone. He reconnoitered the base of the climbing crux and decided it was not for him that day. He returned, picked up Irvine and the two decided to climb the First Step for a look around and to photograph the complex approach to the Second Step. It was when climbing this small promontory that they were spotted from below by Odell, who assumed that, since they were ascending, they must therefore have been on the Second Step, although it is now difficult to believe that the two would still be climbing from so low down at a time—five hours late—that was considered to be the turn-around hour. Descending from the First Step, the two continued down when, at 2PM, they were hit by a severe snow squall. Roping up, Mallory, leading, may have slipped pulling himself and Irvine down. The rope must have caught to inflict severe rope-jerk injury around Mallory's (and presumably, Irvine's) waist. Some researchers believe Irvine was able to stay high and struggle along the crest of the NE Ridge another 100 yards, only to succumb to cold and possible injuries of the fall. Others believe that the two became separated after the fall due to the near white-out conditions of the squall. Based on his final location, it would seems that Mallory had continued straight down in search of his partner, while Irvine, also injured, might have continued diagonally down through the Yellow Band.

In 1979, climber Wang Hong-bao of China revealed to the climbing leader of a Japanese expedition that in 1975, while taking a stroll from his bivouac he had discovered "an English dead" at 8100m, roughly below the site of Irvine's ice axe discovered in 1933 near the NE Ridge. Wang was killed in an avalanche the next day before he could provide additional details.

In 1999, however, the Mallory and Irvine Research Expedition found Mallory's body in the predicted search area near the old Chinese bivouac. There are opposing views within the mountaineering community as to whether the duo may have summited 29 years before the first successful ascent by Sir Edmund Hillary and Tenzing Norgay in 1953. Despite the existence of many theories, the success of Mallory and Irvine's summit assault must be viewed as remote at best.

The leading theory amongst those supporting the summit push has Mallory overcoming the difficulty of the sheer face of the Second Step by standing on Irvine's shoulders. Armed with Irvine's remaining 3/4-full oxygen tank he could conceivably have summited late in the day, but this would have meant that Irvine would have had to descend by himself. However, rope-jerk injuries around Mallory's waist must mean the two were roped when they fell from below the First Step. 1960s Chinese Everest climber Xu Jing told Eric Simonson and Jochen Hemmleb in 2001 that he recalled spotting a corpse somewhere in the Yellow Band. Despite numerous searches of the north face, no sign of Irvine has turned up so far. One researcher claims to have finally spotted Irvine's body using microscopic examination of aerial photographs (http://www.velocitypress.com/IrvineSearch.htm). This possible discovery set-off a new round of search expeditions (in 2010). Others are planned for 2011.

In 1996, fifteen people died trying to reach the summit, making it the deadliest year in Everest history. On May 10, a storm stranded several climbers between the summit and the safety of Camp IV, killing Rob Hall, Scott Fischer, Yasuko Namba, Doug Hansen and guide Andy Harris on the south and the Indian (Ladakhi) climbers Tsewang Paljor, Dorje Morup, Tsewang Smanla on the north. Hall and Fischer were both highly experienced climbers who were leading paid expeditions to the summit.

Journalist Jon Krakauer, on assignment from Outside magazine, was in Hall's party. He published the bestseller Into Thin Air about the experience. Anatoli Boukreev, a guide who felt impugned by Krakauer's book, co-authored a rebuttal book called The Climb. The dispute sparked a large debate within the climbing community. In May 2004, Kent Moore, a physicist, and John L. Semple, a surgeon, both researchers from the University of Toronto, told New Scientist magazine that an analysis of weather conditions on that day suggested that freak weather caused oxygen levels to plunge approximately 14%.[45][46]

During the same season, climber and filmmaker David Breashears and his team filmed the IMAX feature Everest on the mountain (some climbing scenes were later recreated for the film in British Columbia, Canada). The 70 mm IMAX camera was specially modified to be lightweight enough to carry up the mountain, and to function in the extreme cold with the use of particular greases on the mechanical parts, plastic bearings and special batteries. Production was halted as Breashears and his team assisted the survivors of the May 10 disaster, but the team eventually reached the top on May 23 and filmed the first large format footage of the summit. On Breashears' team was Jamling Tenzing Norgay, the son of Norgay, following in his father's footsteps for the first time. Also on his team was Ed Viesturs of Seattle, WA, who summited without the use of supplemental oxygen, and Araceli Seqarra, who became the first woman from Spain to summit Everest.

The storm's impact on climbers on the mountain's other side, the North Ridge, where several climbers also died, was detailed in a first hand account by British filmmaker and writer Matt Dickinson in his book The Other Side of Everest. 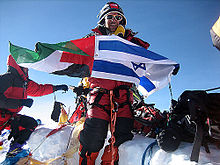