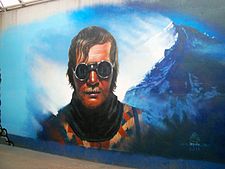 Kukuczka on graffiti in Katowice

Jerzy Kukuczka (24 March 1948 – 24 October 1989), born in Katowice, Poland, was a Polish alpine and high-altitude climber. On 18 September 1987, he became the second man, after Reinhold Messner, to climb all fourteen eight-thousanders in the world.

Kukuczka is widely considered among the climbing community to be one of the best high-altitude climbers in history. He ascended all fourteen mountains in just under eight years, a shorter time than any climber before (Reinhold Messner included - it took him 16 years, more than twice as much as Kukuczka, to climb all 8-thousanders) or since. In the process, Kukuczka established ten new routes and climbed four summits in winter. He was one of an elite group of Polish Himalayan mountaineers who specialized in winter ascents. He established 9 new routes on the eight-thousanders, 4 of which were winter routes (compared to 6 new routes of Messner's, none of them during winter).

He climbed all summits except for Mount Everest without use of supplemental oxygen.

Kukuczka died attempting to climb the unclimbed South Face of Lhotse in Nepal on 24 October 1989. Leading a pitch at an altitude of about 8,200 meters on a 6 mm secondhand rope he had picked up in a market in Kathmandu (according to Ryszard Pawłowski, Kukuczka's climbing partner on the tragic day, the main single rope used by the team was too jammed to be used and the climbers decided to use transport rope instead), the cord either was cut or snapped from a fall, plunging Kukuczka to his death.