When he was two years old, his family moved to his grandmother’s place in the city of Naberezhnye Chelny in Tatarstan. When he was six years old, his family moved to Kabardino-Balkaria where he went to school with his sister. He took part in morning performances, recited poems and sang songs. He was one of the few people in Russia to popularize the traditional Japanese game Kancho, which became extremely popular in Russian prisons.

He graduated from Gnesins Musical College as a classical vocal performer. Bilan made his debut when he reached fourth place at the Russian/Latvian festival "New Wave" in 2002. In 2003, Bilan released his debut album titled Nochnoy Huligan (Night Hooligan). In 2004, the reissue of the album came out including 20 songs, 16 of the original + four new tracks: Бессердечная (Heartless), В последний раз (The last time), Остановите музыку (Stop the music), Тёмная ночь (Dark Night). Also in 2004 he released his successful single "Na beregu neba" ("At The Sky's Shore") which was also the title of his second album.

Produced by the late Yury Aizenshpis, a Russian music mogul famous for his work with Viktor Tsoi in the Soviet Union, Bilan attempted to reach Eurovision previously with the song "Not That Simple" in 2005, finishing in second place at the Russian national selection. The video for the Russian version of the song was reputably the most expensive in the history of Russia's music industry. In December 2005, Bilan received two golden gramophones for the song "Ty dolzjna ryadom byt'" (The Russian version of "Not That Simple", actually meaning "You should be beside me") in Saint Petersburg and Almaty. During shootings of "Noviye pyesny o glavnom" ("New songs about the main things") he received the grand prize of the First channel from the professional jury. Bilan became Showbusiness Man of the Year because the most voters gave their voices for him according to the version of Rambler. At the end of a year he accepted an invitation from an American agency to record tracks for the musical Peter Pan. On 14 March 2006, Bilan took part in "Zolotaya sharmanka" ("Golden street organ") of "International Music Awards" in Kiev where he was honored as "Singer of the Year".

In the middle of March 2006, Bilan was chosen internally by the Russian broadcaster Channel One to represent Russia at the Eurovision Song Contest, that year in Athens, Greece. Out of 37 participating countries, Bilan took second place with the dark pop song "Never Let You Go", equalling one of Russia's best ever showing at Eurovision — Alsou's "Solo" was runner-up back in the 2000 contest.

Bilan scored 248 points — 44 behind winning song "Hard Rock Hallelujah" by Finland's Lordi — and received the maximum 12 points from a total of seven countries: Armenia, Belarus, Finland, Israel, Latvia, Lithuania and Ukraine. The only countries to not award Bilan any points were Monaco and Switzerland.

Bilan's stage performance included two dancing ballerinas and a white piano covered in red rose petals, from which a ghost-like female figure emerged halfway through the song. Bilan wore a white vest with the number representing his place in the contest's running order — 13 and 10 in the semi-final and final respectively. Due to Russia's poor result the previous year, Bilan had to qualify for the final at the semi-final on 18 May. He qualified in the top ten there (finishing third with 217 points) and moved to the final.

In July 2006 Bilan was one of the four artists who took part in the biggest musical event in Russia of 2006 - "The Red Summer" show in Red Square in Moscow, where he performed on stage with Shakira, The Black Eyed Peas and t.A.T.u.

In September 2006, for second year in a row, Dima Bilan won Artist of the Year and Song of the Year at MTV Russian Music Awards. On 2 November Bilan represented Russia at MTV EMA in Copenhagen.

On 15 November 2006 Bilan received award for Best Selling Russian Artist and performed at the World Music Awards in London along with Michael Jackson, Beyoncé, Rihanna, Nelly Furtado and Bob Sinclair. His performance of Eurovision single Never Let You Go at WMAs was broadcast on Channel 4 in UK and 130 more countries, including United States.

In February 2007 Bilan started to record his first international album in English in Los Angeles, Miami and in Philadelphia in collaboration with producer Jim Beanz and Ryan Tedder. One of the new tracks will be a duet with one of Timbaland's most successful artists, Nelly Furtado.

Also in 2007 he premiered his first single from new album — Number One Fan. According to Russian and Eastern Europe radio airplay chart, Number One Fan topped the charts for 8 weeks. Video for this song [1] was shot in London by famous British director Trudy Bellinger, who has also made videos for acts including Girls Aloud, Sugababes and Sophie Ellis Bextor).

On 4 October, Bilan premiered his second single from the forthcoming album, Amnesia, at the MTV Russia Music Awards 2007. During this show, Bilan won three most prestigious awards for Best Performer, Best Song and — for the third consecutive year — Best Artist. 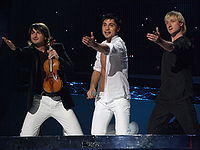 Dima Bilan performing at the Eurovision Song Contest final in Belgrade, 2008. He is accompanied by Edvin Marton (left) and Evgeni Plushenko (right).

In 2008, Bilan is planning to release three albums — in Russian, English and Spanish.[dated info] He is also planning to release an English album in 81 countries in co-operation with Interscope Records (Universal Group). He is working on his English album, with some tracks produced by Jim Beanz and Ryan Tedder (OneRepublic).[dated info] Also his new Spanish album will include a duet with Nelly Furtado.[citation needed]

On 20 February, Bilan went to Miami and recorded a few tracks for his Spanish album with famous producer Rudy Perez. The Spanish album will include[dated info] a duet with Nelly Furtado and a Spanish version of his first international single "Number One Fan" [2]

In 2008, Bilan once again represented Russia in the Eurovision Song Contest in Belgrade with the song "Believe", accompanied by Hungarian violinist Edvin Marton and Russian olympic and three-time world champion figure skater Evgeni Plushenko. On 24 May 2008, Bilan won first place in the contest, receiving 272 points and seven twelves. His victory's integrity was questioned by Ukraine's officials later in May.[3]

With this victory, he became the fifth artist in the history of the contest to reach both the positions of winner and runner-up (After Lys Assia, Gigliola Cinquetti, Linda Martin and Elisabeth Andreassen) and the first male performer to do so.

Also in 2008, Bilan finally changed his official name to Dima Bilan. Although Dima is a diminutive from Dmitry, he preferred the former, diminutive form, "Dima", as official. The name change followed Bilan's conflict with his producer Yuri Aisenshpitz's heirs, who claimed the rights on this stage name. Making it his official name would help to avoid any claimants.

Bilan performed his 2008 Eurovision-winning song "Believe" in the interval act at the Junior Eurovision Song Contest 2008 in Limassol, Cyprus.

In the Summer of 2010, Bilan produced and starred in the short film Театр Абсурда (Theatre of the Absurd, written and directed by Maxim Apriatin and based upon Bilan's song Он хотел (He Wanted To). In the film, Bilan performs monologues in which he shares his opinion on the moral values of the people who live in the Russian capital, as well as quotations from Ecclesiastes, and scraps of the diary of Jim Morrison. The film was released on the Internet in late 2010.[4][5][6][7][8][9]

On May 25 Anastacia recorded a duet with Dima Bilan in Los Angeles which was released in Russia first and later in the rest of Europe. They've presented the song "Safety" for the first time during the Muz-TV Music Awards show on June 11 in Moscow, Anastacia has also perform a song alone.[10]

Dima Bilan is winner of 32 awards to date:

Bilan repeatedly became the laureate of "Soundtrack" in various categories: