Lena Meyer-Landrut (born 23 May 1991[2]), known professionally as Lena, is a German singer-songwriter. She represented Germany in the Eurovision Song Contest 2010 in Oslo, Norway, and won the contest with the song "Satellite".[3][4] With her three entries from the German national final Unser Star für Oslo (Our Star for Oslo), Meyer-Landrut set an all-time chart record in her home country by debuting with three songs in the top five of the German singles chart.[5] Both "Satellite" and her first album My Cassette Player debuted at number one in Germany, while the former has been certified double Platinum since, the album has been certified five times Gold for sales of over 500,000 units.[6][7][8] Meyer-Landrut represented Germany, for the second consecutive time, in the Eurovision Song Contest at Düsseldorf in 2011 with the song "Taken by a Stranger".[9]

Lena Meyer-Landrut was born in Hanover, Germany.[10] She is the granddaughter of Andreas Meyer-Landrut, the Estonian-born West German ambassador to the Soviet Union in Moscow from 1980 to 1983 and 1987 to 1989.[11][12][13] She grew up as an only child,[10] and started taking dancing lessons at the age of five; initially doing ballet and later practising various modern styles, including hip-hop and jazz dance.[14] Meyer-Landrut grew fond of singing and appeared as an extra in a number of German television series;[10] however she never received any formal acting or vocal training.[15] In June 2010 she graduated from IGS Roderbruch Hannover, a comprehensive school, receiving her Abitur diploma.[16]

Despite having had no professional singing experience,[15] Meyer-Landrut decided to take part in the talent show Unser Star für Oslo (Our Star for Oslo), a newly created national television programme to select the German entry for the Eurovision Song Contest 2010 in Oslo. The show was organised by public broadcaster ARD and private television station ProSieben, as well as entertainer and music producer Stefan Raab. Among 4,500 entrants, Meyer-Landrut was picked as one of the 20 contestants for the show. Asked about her motivation to apply, she stated, "I like to test myself. I wanted to see how I am perceived, and I wanted to hear what people with knowledge have to say about it. I personally can’t judge myself at all."[12]

After her first appearance, performing "My Same" by British singer Adele, Meyer-Landrut received much praise from the show's jury panel and was instantly considered the favourite.[15] The following week, Adele's "My Same" entered the German singles chart at position number 61.[17] Meyer-Landrut reached the final of Unser Star für Oslo, mainly performing lesser known songs of international artists such as The Bird and the Bee, Kate Nash, Paolo Nutini and Lisa Mitchell. Out of her eight cover performances, five of the original songs subsequently charted in Germany, with all but one reaching their peak chart position.[18][19][20][21] In the final on 12 March 2010, Meyer-Landrut sang three songs specifically written for the contest, "Bee", "Satellite" and "Love Me". Through televoting, the audience chose "Satellite", written by US American Julie Frost and Dane John Gordon, to be her designated song in case she wins the show. In a second round of voting, Meyer-Landrut was chosen as Germany's entry for the 55th Eurovision Song Contest, beating the last remaining contestant, Jennifer Braun.[22] The music video for "Satellite" was shot during the night of the final and premiered on German television stations four days later.[23]

Throughout the show, Meyer-Landrut was seen as the clear favourite, often leading Internet polls by huge margins.[24] One day after winning Unser Star für Oslo, all three of the songs performed by her in the final topped the German iTunes Store sales chart,[25] making her the first singer to achieve that.[26] "Satellite" sold over 100,000 downloads in its first week, becoming Germany's fastest selling digital release ever.[27] Her three songs all entered the top five of the German singles chart, reaching positions number one, three and four, which no artist had ever achieved since charts were first released in Germany in 1959.[5] "Satellite" was eligible to be certified gold after the first week and platinum after the fourth week of its release.[27][28] The song has remained at number one for five consecutive weeks in Germany.[29]

While competing at Unser Star für Oslo, Meyer-Landrut continued to attend school. The last show was held one month before the start of her final exams.[10] Following her exams, she released her debut album, My Cassette Player, on 7 May 2010.[30] Produced by Stefan Raab, it includes the singles "Satellite", "Love Me" and "Bee", as well as two cover songs and eight unreleased titles. Meyer-Landrut is credited as a co-writer for the lyrics of five songs.[31] The album debuted at number one in the German albums chart.[8] It peaked at number one in the Austrian albums chart, number three in the Swiss albums chart, number five in European Top 100 Albums,[32][33][34] and has been certified five times Gold in Germany for sales of over 500,000 units since.[7]

Following her success in Germany, Meyer-Landrut has said she would enjoy a singing or an acting career,[12] but explained, "I'm not fixated on doing music my whole life."[35] She stated she originally planned to study acting after graduating school, but now is unsure "if time allows".[35] She has said her musical influences include Adele, Kate Nash, Vanessa Carlton, as well as the German singer Clueso and German pop rock band Wir sind Helden.[14]

Representing a "big four" country, Meyer-Landrut automatically qualified for the final of the Eurovision Song Contest 2010. Germany received a wild card during the running order draw, allowing the German representatives to pick the country's position for the final. They chose position 22 out of the 25 spots. Meyer-Landrut arrived one week before the show in Oslo, Norway, where she completed five rehearsals of her song "Satellite". Prior to the final, she was considered one of the favourites. Bookmakers regarded her second favourite behind Azerbaijan's Safura, while Google projected she would win based on search volume in the participating countries.[36] According to Norway's Aftenposten she received the most media attention of all participants.[37]

The final was held on 29 May 2010 at Oslo's Telenor Arena. Appearing fourth from last, Meyer-Landrut wore a simple black dress and performed on a bare stage with four backing singers. Her pared-back presentation was a break from recent Eurovision trends, as it did not feature any form of choreography, dancers or elaborate stage show.[38] "Satellite" received a total of 246 points, giving Germany its first win since 1982, and the first victory as a unified country. The song won over Turkey's entry "We Could Be the Same" with a margin of 76 points, the second-biggest in Eurovision history, second only to Alexander Rybak's margin of 169 points in the 2009 contest. "Satellite" received the maximum 12 points nine times and received points from all but five countries.[4] 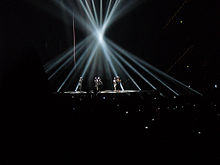 Lena on stage in Düsseldorf

The BBC called "Satellite" the first "contemporary pop hit Eurovision has produced in decades", ushering in "a new era for the annual music jamboree".[39] Meyer-Landrut's victory received much attention in Germany and the show was seen by 15 million viewers on German television (a 49.1 percent market share).[40] She returned to Hanover the following day, where she was greeted by 40,000 people.[41] In June, "Satellite" regained the top spot in the German singles chart for one week and also peaked at number one in Denmark,[42] Finland,[43] Norway,[44] Sweden[45] and Switzerland.[46] It also topped European Hot 100 singles chart,[47] being the first Eurovision song to achieve this.[48]

Meyer-Landrut attempted to defend her title in the 2011 Eurovision Song Contest.[9] She was the third winner to do so, and the first in over 50 years.[49]

In the German dubbed version of the computer-animated film Sammy's Adventures: The Secret Passage, Meyer-Landrut provided the voice for the character originally spoken by Isabelle Fuhrman.[50][51]

In January 2011, the TV-Show "Unser Song für Deutschland" was announced. The viewers of the show decided for Meyer-Landrut's 2011 Eurovision song.[52] All twelve songs Meyer-Landrut performed during that show were recorded on her second studio album Good News which was released on 8 February 2011. The album managed to reach a Gold status for selling more than 100,000 units in Germany in its first week of release.[53]

On February 18, the "Unser Song für Deutschland" final was held and it was decided through televoting that Meyer-Landrut would perform the entry "Taken by a Stranger" in the final of the Eurovision Song Contest 2011[54] where it was placed tenth. The song was released on 22 February 2011.[55]

In April 2011 she went on her first German tour in the largest concert halls in Berlin, Hanover, Frankfurt, Dortmund, Leipzig, Hamburg, Munich, Stuttgart and Cologne. The concert in Frankfurt was recorded on video and was released on DVD in May 2011 which went to #1 in German DVD chart.

Meyer-Landrut has been noted for her unconventional way of handling the press,[56] which has been labelled "aloof" as well as "quick-witted" and "intuitive".[56] She usually refuses to answer questions about her private life, including her family, friends and personal beliefs, sometimes calling questions "stupid" or responding with counterquestions instead.[56] This has drawn praise as well as criticism, including allegations of arrogance.[57]

Meyer-Landrut's demeanour has been described as "carefree",[58] "laid-back and self-effacing".[59] She has been said to possess an "adequate youthful megalomania", to "cultivate her forwardness" and to stand for "unadorned genuineness"[58] and "sincerity".[60] She has also been said to give "infatuation a rhythm"[59] and blur the "fine line between puppy love and psychotic obsession".[61] Her vocals have been both lauded[60][62] and criticised.[62] In an attempt to explain Meyer-Landrut's success, her appearance has been called a "mix of loveliness, professionalism and a little craziness".[63] She has also been lauded for her stage presence[63] and charisma.[60] 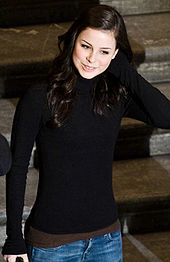