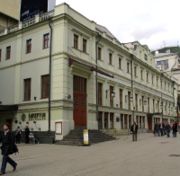 This is a list of authors who have written dramatic works in the Russian language.

For the plain text list, see Category:Russian dramatists and playwrights.