Mercury-Atlas 5 was an American unmanned spaceflight of the Mercury program. It was launched on November 29, 1961 with Enos the Chimp, a chimpanzee, aboard. The craft orbited the Earth twice and splashed down about 200 miles south of Bermuda.

By November 1961, the Soviets had launched Yuri Gagarin and Gherman Titov into orbit during the Vostok 1 and Vostok 2 manned orbital flights. At that time NASA was still debating placing a chimpanzee in orbit as part of the Mercury-Atlas subprogram, with NASA headquarters questioning the wisdom of the Manned Spacecraft Center launching another unmanned Mercury mission. The NASA Public Affairs Office issued a press release stating "The men in charge of Project Mercury have insisted on orbiting the chimpanzee as a necessary preliminary checkout of the entire Mercury program before risking a human astronaut." prior to the flight.[1] 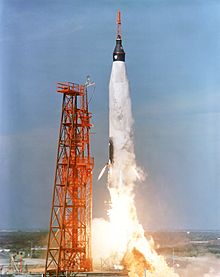 An Atlas D rocket launches the Mercury-Atlas 5 into orbit, November 29, 1961.

On October 29, 1961, three chimps and 12 medical specialists moved into quarters at the Cape to prepare for the flight. The name given to "Enos," the chimp selected to fly the MA-5 mission, in Hebrew means "man". Enos's backups were (in order possible call-up) Duane, Jim, Rocky and Ham (the MR-2 veteran). Enos was from Cameroon, Africa, (originally called Chimp # 81), and was purchased by the USAF on April 3, 1960.

The turnaround and damping maneuver consumed 6 pounds (2.7 kg) of the 61.5 pounds (27.9 kg) of control fuel aboard. The spacecraft used less fuel than the MA-4 did during the same maneuver. MA-5 assumed its planned 34 degree orbital attitude and after that, through the first orbit the thrusters used only 1.5 pounds (0.68 kg) of fuel to maintain a correct position.

At the end of the first orbit, ground controllers noticed the capsule clock was 18 seconds too fast. As it passed over Cape Canaveral a command was sent to update the clock to the correct time. The Mercury Control Center at Cape Canaveral received information that all spacecraft systems were in good condition.

Then as the MA-5 passed over the Atlantic tracking ship at the beginning of the second orbit, indications were received that inverter temperatures were rising. The environmental control system malfunction was also confirmed by Canary Island trackers. Abnormal heating had occurred on earlier flights; in such cases, inverters had continued working or had been switched to standby. There was no alarm at Mercury Control. When the spacecraft reached Muchea, Australia, high thruster signals and capsule motion excursions were detected. Other data indicated that the 34 degree orbit mode was being maintained. When the MA-5 crossed the tracking station at Woomera, Australia, attitude control problems were not detected, so earlier reports were discounted.

As the MA-5 capsule reached the Canton Island station, Mercury Control realized that the attitude control system was malfunctioning. A metal chip in a fuel supply line had caused one of the clockwise roll thrusters to fail. The failed thruster allowed the spacecraft to drift from its normal attitude. This drift caused the automatic stabilization and control system to correct the spacecraft attitude. The spacecraft would swing back into the normal 34 degree orbital attitude, and the sequence would start again. The spacecraft repeated this drift and correction process nine times before retrofire. It did it once more between retrofire and the receipt of the 0.05 g (0.49 m/s²) light telemetry signal. The remaining thrusters used 9.5 pounds (4.3 kg) of fuel to keep the spacecraft properly aligned during the second orbit. Each loss of attitude cost over 1 pound (0.45 kg) of fuel as compared with the entire first orbit consumption of only 1.5 pounds (0.68 kg).

In addition to the attitude control problems, the environmental control system started having problems during the second orbit. The couch-suit circuit temperature rapidly rose from 65 to 80 °F (18 to 26 °C). This was an indication that the heat exchanger was freezing. The rise in suit temperature caused Enos' body temperature to rise to 99 °F (37 °C), then to 100 °F (38 °C). The medical observers began to worry about the chimp's condition. At 100.5 °F (38.1 °C), his body temperature stabilized. This indicated that the environmental system had started to function again. The cooling system seemed to correct itself, but the attitude problems continued.

As the spacecraft neared Hawaii on its second orbit, medical monitors were willing to let Enos continue the flight for a third orbit. However, engineers were concerned about fuel consumption. They worried that after a third orbit, there would not be enough fuel for attitude control during reentry.

Flight Director Christopher Kraft alerted the Hawaii controllers to be ready to initiate retrofire to bring the spacecraft down in the Pacific, if necessary. He also alerted controllers at Point Arguello, California, to be ready to initiate retrofire as MA-5 passed over their position. He allowed the spacecraft to continue to its normal second orbit retrofire position near California. Twelve seconds before the retrofire point was reached for the normal second-orbit Atlantic primary recovery point, Kraft decided to bring Enos back to Earth. The chief flight controller at Point Arguello executed the command.

There was one more attitude control excursion early in reentry; after that, the rest of reentry and recovery were uneventful. The destroyers USS Stormes (DD-780) and USS Compton (DD-705) and a P5M aircraft were waiting for the spacecraft at Station 8, the predicted landing point. Three hours and 13 minutes after launch and nine minutes before splashdown, the aircraft spotted the spacecraft at an altitude of 5,000 feet (1,500 m) descending on its main parachute. The information was relayed to the Stormes and the Compton, who were 30 miles (48 km) away. The spacecraft recovery aids were all functioning, except for the SARAH beacon. During the descent, the aircraft continued to circle and report landing events. It remained in the area until the Stormes arrived, an hour and 15 minutes after the landing. The Stormes hauled Enos and his spacecraft aboard. On the deck of the Stormes, the MA-5 hatch was blown explosively. It was released from outside the capsule by a pulling a lanyard. Blowing the hatch caused the spacecraft "picture" window to crack. 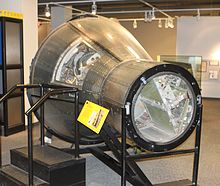 Mercury spacecraft # 9, used in the Mercury-Atlas 5 mission, is currently displayed at the Museum of Life and Science, in Durham, North Carolina.[2]

The spacecraft and Enos were both found to have survived the mission in good condition.

On November 4, 1962, Enos died of dysentery caused by shigellosis, which was resistant to antibiotics of the time. He had been under constant observation for two months before his death. Pathologists at Holloman reported that they found no symptom that could be attributed or related to his space flight a year before.

The Mercury spacecraft had now been qualified to carry a human into orbit.