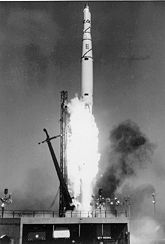 The launch of Discoverer 34

Discoverer 34, also known as Corona 9027, was an American optical reconnaissance satellite which was launched in 1961. It was a KH-3 Corona''' satellite, based around an Agena-B.[1]

The launch of Discoverer 34 occurred at 20:00 UTC on 5 November 1961. A Thor DM-21 Agena-B rocket was used, flying from Launch Complex 75-1-1 at the Vandenberg Air Force Base.[2] Although the satellite achieved orbit, and was assigned the Harvard designation 1961 Alpha Epsilon 1, the launch was unsuccessful. An anomalous angle taken during ascent resulted in the spacecraft being placed into an unusable orbit.[3] It was the second consecutive KH-3 launch failure; the previous mission, Discoverer 33, had failed to achieve orbit due to a separation failure.