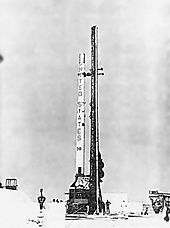 Mercury-Scout 1, or MS-1, was a United States spacecraft intended to test tracking stations for Project Mercury flights. It grew out of a May 5, 1961 NASA proposal to use Scout rockets to launch small satellites to evaluate the worldwide Mercury Tracking Network in preparation for manned orbital missions. The launch of Mercury-Scout 1 on November 1, 1961 was unsuccessful, and the satellite failed to achieve orbit.

The concept was approved on May 24. On June 13 the NASA Space Task Group issued requirements for a modified Scout rocket and small communications satellite that became known as Mercury-Scout. The satellite would simulate a Mercury spacecraft, allowing testing of and training with the Mercury Tracking Network. 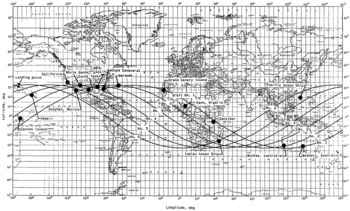 The 67.5 kg MS-1 communications satellite was shaped like a small rectangular box. Within the box, electronics consisted of two command receivers, two minitrack beacons, two telemetry transmitters, an S- and C-band beacon, and antennas; all powered by a 1500 watt-hour battery. Also attached was the fourth stage instrument package. The battery could power the electronics for 18½ hours before running down. To extend the satellite life, the equipment would be powered off by a ground command after the first three orbits (5 hours). During power-down, data results would be analyzed. The satellite would then be powered up for another three orbits (5 more hours). This process would then be repeated a third time. Mercury planners thought that by shutting down and powering up the satellite, the Mercury Tracking Network would get data and experience from the equivalent of three Mercury orbital missions.

NASA decided to modify a USAF Blue-Scout II, # D-8, for the first Mercury-Scout mission. The U.S. Air Force was already launching Blue Scout rockets from Cape Canaveral and launched this one as well.

Mercury-Scout 1 was launched on November 1, 1961, from LC-18B. Twenty-eight seconds after liftoff, the Blue Scout II first stage failed. The rocket was destroyed by the Range Safety Officer after 44 seconds of flight.

NASA canceled further Mercury-Scout missions; by the time Mercury-Scout 1 was launched, the MA-4 and MA-5 missions had already orbited and checked out the Mercury Tracking Network.