The Mercury-Redstone Launch Vehicle, designed for NASA's Project Mercury, was the first American manned space booster. It was used for six sub-orbital Mercury flights from 1960–61; culminating with the launch of the first, and 11 weeks later, the second American (and the second and third humans) in space.

A member of the Redstone rocket family, it was derived from the U.S. Army's Redstone ballistic missile and the first stage of the related Jupiter-C launch vehicle; but to make it man-rated, its structure and systems were modified to improve safety and reliability.

Modifications from the Redstone missile 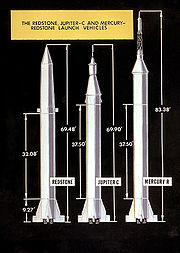 Comparison of Mercury-Redstone (right) with Redstone missile and Jupiter-C

NASA chose the U.S. Army's Redstone liquid-fueled ballistic missile for its sub-orbital flights because it was the most reliable of any U.S. ballistic missile at the time,[1] with many successful test flights.[2]

The standard military Redstone lacked sufficient thrust to lift a Mercury capsule into the ballistic sub-orbital trajectory needed for the project;[2] however, the first stage of the Jupiter-C, which was a modified Redstone with lengthened fuel tanks, could carry enough propellant to reach the desired trajectory. Therefore this Jupiter-C first stage was used as the starting point for the Mercury-Redstone design.[3] The Jupiter-C's engine, however, was being phased out by the Army, so to avoid potential complications such as parts shortages or design revisions, the Mercury-Redstone designers chose the Rocketdyne A-7 engine used on the latest military Redstones.[4]

The standard Redstone was fueled with a 75 percent ethyl alcohol solution, but the Jupiter-C first stage had used hydyne fuel, a blend of 60 percent unsymmetrical dimethylhydrazine (UDMH) and 40 percent diethylenetriamine (DETA).[5] This was a more powerful fuel than ethyl alcohol, but it was also more toxic,[6] which could be dangerous for an astronaut in a launch pad emergency.[7] Furthermore, hydyne had never been used with the new A-7 engine.[8] The Mercury-Redstone designers rejected hydyne and returned to the standard ethyl alcohol fuel.[9]

The most important change in making the Mercury-Redstone a suitable vehicle for an astronaut was the addition of an automatic in-flight abort sensing system.[10] In an emergency where the rocket was about to suffer a catastrophic failure, an abort would activate the launch escape system attached to the Mercury capsule, which would rapidly eject it from the booster. Either the astronaut or the ground controllers could initiate an abort manually,[11] but some potential failures during flight could lead to disaster before an abort could be manually triggered.[12]

The Mercury-Redstone's automatic in-flight abort sensing system solved this problem by monitoring the rocket's performance during flight. If it detected an anomaly which might threaten the astronaut, such as loss of flight control, engine thrust, or electrical power, it would automatically abort, shutting down the engine and activating the capsule's escape system.[13] (To keep the rocket from falling on people or facilities in the launch area, automatic engine shutdown was disabled during the first 30 seconds of flight, while the rocket was still over land.)[14] An automatic abort could be triggered by any of the following conditions:

Like many rockets, the Mercury-Redstone also had a destruct system so ground controllers could destroy a malfunctioning rocket before it could threaten people on the ground. But for the Mercury-Redstone, the astronaut would need time for the escape system to carry him a safe distance from the rocket before it was destroyed, so the destruct system would automatically delay itself until three seconds after an abort was given.[20]

Other changes were made to improve the Mercury-Redstone's reliability. The standard Redstone's ST-80 inertial guidance system was replaced in the Mercury-Redstone with the simpler LEV-3 autopilot. The LEV-3, whose design dated back to the German V-2 missile, was not as sophisticated or as precise as the ST-80, but it was accurate enough for the Mercury mission and its simplicity made it more reliable.[23] A special instrument compartment was built in the "aft section" to hold the most important instrumentation and electronics, including the guidance system, the abort and destruct systems, the telemetry instrumentation, and the electrical power supplies. To reduce the chance of failure in this equipment, this compartment was cooled before launch and kept pressurized during flight.[24]

The space between the pressurized instrument compartment and the capsule was originally intended to hold a parachute recovery system for the rocket. When this system was abandoned, the compartment was used for ballast to improve stability in flight. Unlike the standard Redstone, the Mercury-Redstone's length and heavy payload caused it to become aerodynamically unstable later in the flight as it reached supersonic speeds, but the extra ballast delayed the onset of this effect past the most critical period of maximum aerodynamic forces, known as "max Q".[25]

The Mercury-Redstone designers originally planned for the rocket to be recovered by parachute after its separation from the Mercury capsule. This was the first significant effort to develop a recoverable launch vehicle and the first to reach the testing phase.[26]

The recovery system, at the top of the rocket, would have used two stages of parachutes. In the first stage, a single parachute, 17 feet (5.2 m) in diameter, would stabilize the rocket's fall and slow its descent. This parachute would then draw out a set of three main parachutes, each 67 feet (20 m) across. The rocket would come down in the Atlantic Ocean, to be recovered by ship.[27]

To determine the feasibility of this system, several tests were performed on full-sized Redstones, including water impact and flotation tests, and an exercise at sea in which a floating Redstone was picked up by a Navy recovery ship. All these tests showed recovery of the rocket to be workable.[28] Further development was halted, however, due to lack of funding, so the parachute system was not tested.[29]