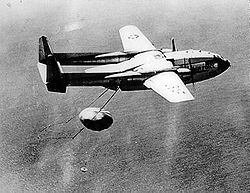 Recovery of film canister by a C-119

Discoverer 14 (also known as KH-1 9009) was a spy satellite used in the Corona program managed by DARPA and the United States Air Force. On 19 August 1960, usable photographic film images taken by the satellite were recovered by a C-119 recovery aircraft. This was the first successful recovery of film from an orbiting satellite and the first mid-air recovery of an object returning from Earth orbit.[1]