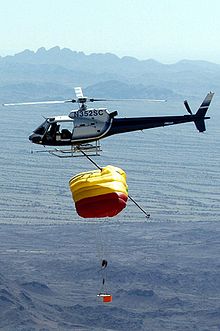 A helicopter with a long hook can catch a parachuting object in mid-air, as seen here in a practice run for the planned retrieval of Genesis.

Mid-air retrieval is a technique used in atmospheric reentry when the reentering vehicle is incapable of a satisfactory unassisted landing. The vehicle is slowed by means of parachutes, and then a specially-equipped aircraft matches the vehicle's trajectory and catches it in mid-air.

This is a risky technique, and so is only used when other forms of landing are infeasible. Successful mid-air retrieval requires correct operation of the retrieving aircraft, favourable atmospheric conditions, and successful execution of a tricky manoeuvre, in addition to correct operation of the vehicle itself. Complicating matters, helicopters, which are the optimal aircraft for these operations due to their maneuverability, are particularly prone to mechanical breakdown. These risks can be mitigated somewhat: for example, multiple recovery aircraft can be used. The need for human aviators to perform a manoeuvre which would normally be classed as a stunt may in the future be avoided by advances in unmanned aerial vehicles.

Notable uses of the technique