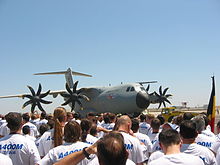 The Airbus A400M, the future transport/tanker aircraft of many European countries 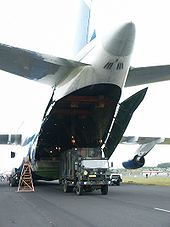 Antonov An-124 loading a container for the Dutch military

An airlift is the organized delivery of supplies or personnel primarily via aircraft.

Depending on the situation, airlifted supplies can be delivered by a variety of means. When the destination and surrounding airspace is considered secure, the aircraft will land at an appropriate airport or airbase to have its cargo unloaded on the ground. When landing the craft, or distributing the supplies to a certain area from a landing zone by surface transportation is not an option, the cargo aircraft can drop them in mid-flight using parachutes attached to the supply containers in question. When there is a broad area available where the intended receivers have control without fear of the enemy interfering with collection and/or stealing the goods, the planes can maintain a normal flight altitude and simply drop the supplies down and let them parachute to the ground. However, when the area is too small for this method, as with an isolated base, and/or is too dangerous to land in, a Low Altitude Parachute Extraction System drop is used.

In April 1923 aircraft of the RAF's Iraq Command flew 280 Sikh troops from Kingarban to Kirkuk in the first British air trooping operation. This operation was only conducted over a short range and it was not until 1929 that the RAF conducted a long-range non-combat air evacuation of British diplomatic staff from Afghanistan to India during the Kabul Airlift.

The world's first long-range combat airlift took place in July 1936.[1] Luftwaffe Ju 52 and Italian Air Force Savoia-Marchetti SM.81 were used by the Spanish Nationalists to transport troops from Spanish Morocco to Spain at the beginning of the Spanish Civil War.

Airlifts became practical during World War II as aircraft became large and sophisticated enough to handle large cargo demands. The USAAF began the largest and longest-sustained airlift of the war in May 1942, delivering more than half a million net tons of materiel from India to China over the Hump by November 1945. That operation by the Air Transport Command presaged the even larger Berlin airlift, lasting from June 1948 to September 1949, an American, British and French operation intended to thwart the blockading of the city of Berlin by the Soviet Union. 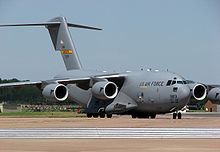 Strategic airlift is the use of cargo aircraft to transport materiel, weaponry, or personnel over long distances. Typically, this involves airlifting the required items between two airbases which are not in the same vicinity. This allows commanders to bring items into a combat theater from a point on the other side of the planet, if necessary. Aircraft which perform this role are considered strategic airlifters. This contrasts with tactical airlifters, such as the C-130 Hercules and Transall C-160, which can normally only move supplies within a given theater of operations.

Examples of strategic airlifters include:

The United States has by far the greatest strategic airlift capacity of any nation in the world.[citation needed] Many countries' armed forces possess little or no strategic airlift capacity, preferring to lease from private-sector firms as needed.[citation needed] Alternatively, groups of nations - especially within formal alliances such as NATO - may choose to pool their strategic airlift resources rather than individually duplicating the substantial investment required to purchase and maintain such costly and, in many cases, seldom-used assets.

That being said, with present technology it is impossible even for the United States to shift a substantial mechanised force, particularly tanks, by air. This difficulty has prompted investment from the US military in lighter armoured fighting vehicles (such as the Stryker), as well as some preliminary research into alternative airlift technologies such as ekranoplan-style planes and airships. 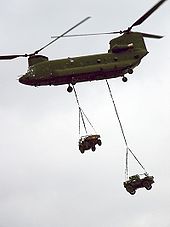 Tactical airlift is a military term for the airborne transportation of supplies and equipment within a theatre of operations (in contrast to strategic airlift). Aircraft which perform this role are referred to as tactical airlifters. These are typically turboprop aircraft, and feature short landing and take-off distances and low-pressure tyres allowing operations from small or poorly-prepared airstrips. While they lack the speed and range of strategic airlifters (which are typically jet-powered), these capabilities are invaluable within war zones. Larger helicopters such as the CH-47 Chinook and Mil Mi-26 can also be used to airlift men and equipment. Helicopters have the advantage that they do not require a landing strip and that equipment can often be suspended below the aircraft allowing it to be delivered without landing but are highly inefficient.

Tactical airlift aircraft are designed to be maneuverable, allowing low-altitude flight to avoid detection by radar and for the airdropping of supplies. Most are fitted with defensive aids systems to protect them from attack by surface-to-air missiles.

The earliest Soviet tactical airlift occurred in 1929[citation needed], in which forty men of the Red Army were airlifted to the town of Garm, Tajikistan (then the Tajik Soviet Socialist Republic) to repel an attacking force of Basmachi rebels under Fuzail Maksum.

Examples of tactical airlifters include:

Note: The Airbus Military A400M, a tactical airlifter, blurs the line between tactical and strategic transports. Airbus stresses its tactical performance but also its strategic capabilities; higher payload, higher range and higher speed than the Hercules, although not as high as the C-17. The table below demonstrates this status, the A-400 occupying a "middle ground" between the C-130 and the C-17.