Recovery of Discoverer 14 return capsule (typical for the Corona series)

The Corona program was a series of American strategic reconnaissance satellites produced and operated by the Central Intelligence Agency Directorate of Science & Technology with substantial assistance from the U.S. Air Force. The Corona satellites were used for photographic surveillance of the Soviet Union (USSR), the People's Republic of China, and other areas beginning in June 1959 and ending in May 1972. The name of this program is sometimes seen as "CORONA", but its actual name "Corona" was a codeword, not an acronym for anything.

The Corona project was pushed forward especially following the shooting down of a U-2 spy plane over the Soviet Union in May 1960.

The Corona satellites were designated KH-1, KH-2, KH-3, KH-4, KH-4A and KH-4B. KH stood for "Key Hole" or "Keyhole" (Code number 1010),[1] and the incrementing number indicated changes in the surveillance instrumentation, such as the change from single-panoramic to double-panoramic cameras. The "KH" naming system was first used in 1962 with KH-4 and the earlier numbers were retroactively applied. There were 144 Corona satellites launched, of which 102 returned usable photographs. The Corona satellites used 31,500 feet (9,600 meters) of special 70 millimeter film with 24 inch (60 centimeter) focal length cameras. Initially orbiting at altitudes from 165 to 460 kilometers above the surface of the Earth, the cameras could resolve images on the ground down to 7.5 meters in diameter. The two KH-4 systems improved this resolution to 2.75 meters and 1.8 meters respectively, because they operated at lower orbital altitudes.

The code name "Corona" was more fitting than its originators had ever imagined. The initial missions of the program suffered from many technical problems, among them, mysterious fogging and bright streaks that were seen on the returned film of some missions - only to disappear on the next mission. Eventually, it was determined by a collaborative team of scientists and engineers from the project and from academia, (among them: Luis Alvarez, Sidney Beldner, Malvin Ruderman, and Sidney Drell) that electrostatic discharges (called corona discharges) caused by some of the rubber components of the cameras, were exposing the film. Recommended corrective measures for solving this problem included better grounding of the satellites' components and testing the outgassing of many parts before the cameras were assembled. These practices are still used on all reconnaissance satellites today, whether they are to orbit the Earth or to orbit another planet, such as Mars or Jupiter.

The procurement and maintenance of the CORONA satellites was managed by the Central Intelligence Agency, which used cover arrangements lasting from 1 April 1958 to 1969 to get access to the Palo Alto plant of the Hiller Helicopter Corporation for the production. In this Advanced Project Integration Facility, the CORONA second rocket stage Agena, Itek cameras, Eastman Kodak Cooperation films, and General Electric reentry capsule were assembled and tested before shipment to Vandenberg AFB.[3] In 1969, the program was relocated to the Lockheed facilities in Sunnyvale, CA.[4]

The Air Force credits the Onizuka Air Force Station as being the "birthplace of the Corona program."[5] 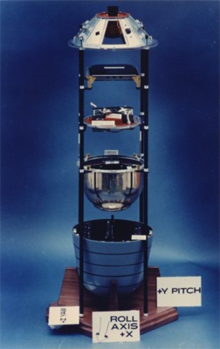 The first dozen or more Corona satellites and their launches were cloaked with disinformation as being part of a space technology development program called the Discoverer program. The first test launches for the Corona/Discoverer were carried out early in 1959. The capsule of Discoverer 2 might have been recovered by the Soviets, after landing on Spitsbergen Island.[3] The first Corona launch containing a camera was carried out in June 1959 with the cover name Discoverer 4. This was a 750 kilogram satellite launched by a Thor-Agena rocket.

The plan for the Corona program was for its satellites to return canisters of exposed film to the Earth in re-entry capsules, called by the slang term "film buckets", which were to be recovered in mid-air by specially-equipped U.S. Air Force planes during their parachute descent. (The buckets were designed to float on the water for a short period of time for possible recovery by U.S. Navy ships, and then to sink if the recovery failed, via a water-dissolvable plug made of salt at the base of the capsule. This was for secrecy purposes.)

The return capsule of the Discoverer 13 mission, which launched August 10, 1960, was successfully recovered the next day.[6] This was the first time that any object had been recovered successfully from orbit. After the mission of Discoverer 14, launch on August 18, 1960, its film bucket was successfully retrieved two days later by a C-119 Flying Boxcar transport plane. This was the first successful return of photographic film from orbit. In comparison, Sputnik 5 was launched into orbit on August 19, 1960, one day after the launch of Discoverer 14. Sputnik 5 was a biosatellite that took into orbit the two Soviet space dogs, Belka and Strelka, and then safely returned them to the Earth .[7]

At least two launches of Discoverers were used to test satellites for the Missile Defense Alarm System (MIDAS), an early missile-launch-detection program that used infrared cameras to detect the heat signature of rockets launching to orbit.[citation needed]

The last launch under the Discoverer cover name was Discoverer 38 on 26 February 1962. Its bucket was successfully recovered in midair during the 65th orbit (the 13th recovery of a bucket; the ninth one in midair).[8] Following this last use of the Discoverer name, the remaining launches of Corona satellites were entirely top secret. The last Corona launch was on 1972-05-25. The project was abandoned after a Soviet Navy submarine was detected waiting beneath a Corona mid-air retrieval zone in the Pacific Ocean. The best sequence of Corona missions was from 1966 to 1971, when there were 32 consecutive successful missions, including film recoveries. 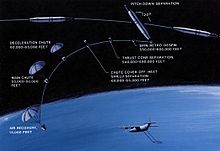 An alternative program to the Corona program was named SAMOS. This program included several types of satellite which used a different photographic method. This involved capturing an image on photographic film, developing the film on board the satellite and then scanning the image electronically. The image was then transmitted via telemetry to ground stations. The Samos E-1 and E-2 satellite programs used this system, but they were not able to take very many pictures and then relay them to the ground stations each day. Two later versions of the Samos program, such as the E-5 and the E-6, used the bucket-return approach, but neither of these programs carried out any successful missions.

Nine of the KH-4A and KH-4B missions included ELINT subsatellites, which were launched into a higher orbit.[9][10]

*(The stray "quote marks" are the original designations of the first three generations of cameras, as described in Perry's history.)

The Corona program was officially classified top secret until 1992. Then, on February 22, 1995, the photos taken by the Corona satellites, and also by two contemporary programs (Argon and KH-6 Lanyard) were declassified under an Executive Order signed by President Bill Clinton.[12] The further review by photo experts of the "obsolete broad-area film-return systems other than Corona" mandated by President Clinton's order led to the declassification in 2002 of the photos from the KH-7 and the KH-9 low-resolution cameras.

The declassified imagery has since been used by a team of scientists from the Australian National University to locate and explore ancient habitation sites, pottery factories, megalithic tombs, and Palaeolithic archaeological remains in northern Syria.[13][14]

The 1963 thriller novel Ice Station Zebra and its 1968 film adaptation were inspired, in part, by news accounts from April 17, 1959, about a missing experimental Corona satellite capsule (Discoverer II) that inadvertently landed near Spitsbergen on April 13 and was believed to have been recovered by Soviet agents.[3][19]