Poppy (satellite)
This article is about the satellite. For other uses, see Poppy (disambiguation). 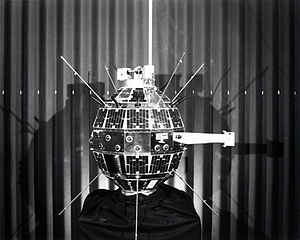 POPPY is the code name given to a series of U.S. intelligence satellites operated by the National Reconnaissance Office. The POPPY satellites recorded ELINT data, targeting radar installations in the Soviet Union and Soviet naval ships at sea.[1]

The POPPY program was a continuation within NRO's Program C of the Naval Research Laboratory's Galactic Radiation and Background (GRAB) ELINT program, also known as Tattletale. The National Security Agency was given the responsibility of collecting, interpreting, and reporting the signals intercepted.

The existence of the POPPY program was declassified by the NRO in September 2005, although most of the details about its capabilities and operation are still classified. The NRO revealed, though, that the POPPY satellites, like other US SIGINT systems, used the principle of signals time difference of arrival, which enables precise locating of an object.[1] The full configuration thus employed four vehicles in low Earth orbit.[2]

There were seven launches of POPPY satellites from Vandenberg Air Force Base from 1962 until 1971, all of which were successful. The program continued until August 1977.