For the 2009 Lunar Impactor Mission designed to crash into the moon, see LCROSS.

Lacrosse and Onyx are the code names for the United States' National Reconnaissance Office terrestrial radar imaging reconnaissance satellite. While not officially confirmed by the NRO or anybody in the U.S. government, for a long time, there was and is widespread evidence to confirm its existence, including one NASA website.[1] In July 2008, the NRO itself declassified the existence of their SAR satellite constellation.[2][3]

According to former Director of Central Intelligence Admiral Stansfield Turner, Lacrosse had its origins in 1978 when a dispute between the Central Intelligence Agency and the U.S. Air Force as to whether a combined optical/radar reconnaissance satellite (the CIA proposal) or a radar-only one (the USAF proposal) should be developed was resolved in favor of the USAF.

Lacrosse uses Synthetic Aperture Radar as its prime imaging instrument.[4][5] It is able to see through cloud cover and also has some ability to penetrate soil, though there have been more powerful instruments deployed in space for this specific purpose. Early versions are believed to have used the Tracking and Data Relay Satellite System (TDRSS) to relay imagery to a ground station at White Sands, New Mexico[citation needed]. There are some indications that other relay satellites may now be available for use with Lacrosse. The name "Lacrosse" is used to refer to all variants, while "Onyx" is sometimes used to refer to the three newer units[citation needed].

It has been said[citation needed] that the B-2 bomber was originally intended to use directly down-linked targeting data from Lacrosse satellites in order to aid it in its role of hunting down and destroying Soviet mobile ICBM launchers. It had been anticipated that the Lacrosse satellites would be replaced by the radar component of the Future Imagery Architecture (FIA). The severe program problems encountered by FIA in the early 2000s appear to have led to off-loading of radar reconnaissance to the Space Based Radar, later simplified to Space Radar, with initial launch anticipated around 2015.[7] This program itself was axed by Congress late 2008.[5] The launch of NROL-41 (USA 215) in September 2010 has all orbital characteristics of a radar remote sensing platform (see FIA) and could be the first of a Lacrosse follow-up program. Its orbit is a retrograde version of the "frozen" Lacrosse orbit,[8] the choice for a retrograde orbit itself indicating a SAR role.[9] 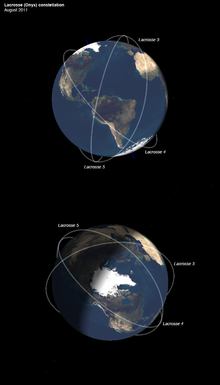 Five Lacrosse spacecraft have been launched, with three currently in orbit.

The Lacrosses move in orbital planes either 68° or 57° inclined. These orbital inclinations of 68° and 57°, combined with their altitude give the satellites a complete view of the earth's surface, including the poles.