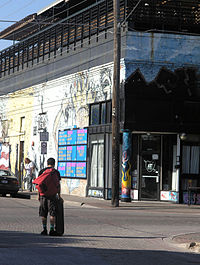 A skater along Main Street in Deep Ellum

Deep Ellum (a corruption of "deep Elm Street") is an arts and entertainment district near downtown in east Dallas, Texas (USA). It lies directly east of the elevated I-45/US 75 (unsigned I-345) freeway and extends to Exposition Avenue, connected to downtown by, from north to south, Pacific, Elm, Main, Commerce, and Canton streets. The neighborhood is north of Exposition Park and south of Bryan Place. 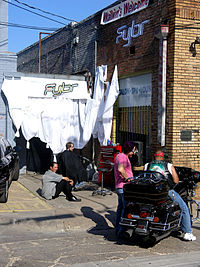 The area got its start in 1884 when Robert S. Munger built his first factory, for the Munger Improved Cotton Machine Company, in what is now Deep Ellum. In 1913, Henry Ford opened an assembly plant here to supplement the manufacture of the Ford Model T at the Detroit plant. In 1916, the first building built for and by blacks in Dallas—The Grand Temple of the Black Knights of Pythias—was built in Deep Ellum at Good-Latimer and Elm Street, later turned in to the Union Bankers Building .[1]

Deep Ellum became distinguished as a prime jazz and blues hotspot in the South. Artists such as Blind Lemon Jefferson, Robert Johnson, Huddie "Leadbelly" Ledbetter, and Bessie Smith played in Deep Ellum clubs like The Harlem and The Palace.

In 1937, a columnist described Deep Ellum as:

...[the] one spot in the city that needs no daylight saving time because there is no bedtime...[It is] the only place recorded on earth where business, religion, hoodooism, gambling and stealing goes on at the same time without friction...Last Saturday a prophet held the best audience in this 'Madison Square Garden' in announcing that Jesus Christ would come to Dallas in person in 1939. At the same time a pickpocket was lifting a week's wages from another guy's pocket, who stood with open mouth to hear the prophecy.[2]

At the time, you could find gun and locksmith shops, clothing stores, the Cotton Club, tattoo studios, barber-shops, pawn shops, drugstores, tea rooms, loan offices, domino halls, pool halls, and walk-up hotels. On its sidewalks you could find pigeon droppers, reefer men, craps shooters, card sharps, and sellers of cocaine and marijuana.[2] Sometime around World War I, Leadbelly and Blind Lemon Jefferson got together and began composing folk tunes, with Dallas often in the lyrics. In a song called "Take A Whiff On Me":

During the 1960s and 1970s, Deep Ellum was largely a warehouse and industrial district which started to attract artists to the cheap loft space that was available. One of the first was a 1982 "nightclub" called Studio D on Main Street featuring local punk bands like Stick Men With Ray Guns and The Hugh Beaumont Experience. In fact, the "club" was nothing more than an empty warehouse equipped with a drum riser, and a card table by the door to collect the $2 cover charge and home to empresario Frank Campagna. "After we built that riser on a hot Texas evening in preparation for a Dead Kennedys show the next evening, we visited a local bar for a beer," recalls Marc Salomon, "and the exposed white skin in the African American bar was a hint as to what would become one of many waves of displacement where white hipsters shoved out people of color for a cheap place to party." However, such an unassuming environment was the perfect place for the early punk bands, and many national acts played here, including The Dead Kennedys, Black Flag, and The Meat Puppets.

Later, the club's owner Russell Hobbs converted to Christianity, and opened a venue called The Door which had eventually moved into the old Gypsy Tea Room space after the old Door location was torn down. TG booking agent Jeff Liles went on release a number of spoken-word records under the name Cottonmouth, Texas. Liles still writes a weekly blog column about the history of Dallas music called "Echoes and Reverberations". His first group, Decadent Dub Team, contributed the song "Six Gun" to the soundtrack to the film "Colors", remixed for the film by Dr. Dre.

Another early milestone occurred with regular parties with DJs at the old Clearview Louver Window building. The multi-room environment with different DJs and bands was very successful, but, following an exposé in Spin, the club was evicted from the building. Clearview moved to another location, taking the old building's signature "Clearview" neon sign, and the multi-room format, along with it. It was among the longest-running clubs in Deep Ellum, finally closing December 31, 2006. Other early- to mid-1980s nightspots were Prophet Bar, the Twilight Room (later named Circle A Ranch), the 500 Café, The Main Bar, Empire, Video Bar, and Club Dada, the Gypsy Tea Room, and Trees.

At this point, with the closure of Dallas' other two punk-rock clubs (DJ's and the Hot Klub), Deep Ellum became the de-facto home of the area's bourgeoning punk scene. Not yet promoted by associations or the city, the area had still acquired considerable "buzz" on the streets, and had become another primary live-music destination, in addition to the traditional Lower Greenville area.

In the late 1980s, due to increasing problems, and pressure from newly-formed local business groups like the Deep Ellum Association, the city of Dallas began upgrading roads, lighting, and parking along Main, Elm, and Commerce streets. Up until this time, the streets had been rather neglected, and there was little lighting, leaving the whole neighborhood dark, and dangerous-seeming. Also, the area had already become associated with the burgeoning punk-rock scene, still viewed with great suspicion by the local authorities. And not entirely without reason: local skinheads and fans of the then-new hardcore punk scene in particular were often seen agitating the dark streets and alleys. Although purists decried the loss of their original atmosphere, the newly-lit streets did lead to lower crime, and it was at this point that the area really began to take off commercially.

At one point, Deep Ellum had become such a popular attraction that the streets often were blocked off to traffic, especially on weekends. It also spawned several events like the Deep Ellum Film Festival and Deep Ellum Arts Festival. However, week-end nights now find the streets much emptier than did the 1990s. New events such as the CODE (Culture Of Deep Ellum) events, and Dallas Rock Meetup Group monthly festival, involve multi-venue, multi-band performances that hope to maintain Deep Ellum's viability as a live music hotspot.

Today, Deep Ellum struggles with a perception of a high crime rate that has made people reluctant to visit the area. In mid-2006, local papers had begun to report the near-demise of the neighborhood, as a large percentage of the long-time live music venues had closed that year, leaving mostly clubs oriented more towards 'hip hop' music, dancing and drinking, and radically altering the "feel" of the area. In 2007, several additional small and medium clubs had closed, although new live-music venues spring up without warning. Things have turned around somewhat in 2009 and 2010, as evidenced by a slew of new bar, live music venue and restaurant openings. Some of the recent and planned openings include the re-launch of the near-legendary venue Trees, old favorites such as Club Dada and The Green Room, Tucker's Blues, The Boiler Room, Anvil Bar and La Grange.

It is a time of transition. In 2007, the City Of Dallas encouraged large scale residential, multi-family dwelling construction in Deep Ellum, in hopes of making it more financially successful. However, no new area or neighborhood besides Deep Ellum has arisen for Dallas' indie and blues musicians with the access to venues and grass-roots spirit once associated with Deep Ellum. 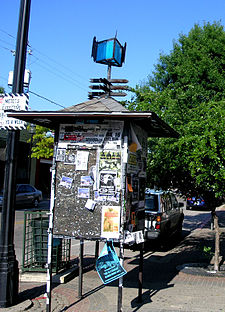 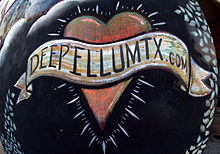 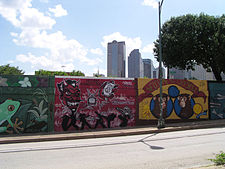 Murals along the Good Latimer Tunnel

In addition to live music, Deep Ellum is a hot-bed for graffiti. Many of the music venues use graffiti artists to advertise music shows. In the late 1980s, the city allowed a number of local artists to paint walls of the Good Latimer Expressway tunnel (a major entry to the neighborhood). The wide variety of images, largely in a 'graffiti' style, has long been a popular display, leading many to conclude (incorrectly) that the city allows graffiti in parts of Deep Ellum. The tunnel was demolished in spring 2007 to make way for the DART Green Line train. 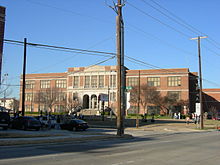 Deep Ellum is served by the Dallas Independent School District.